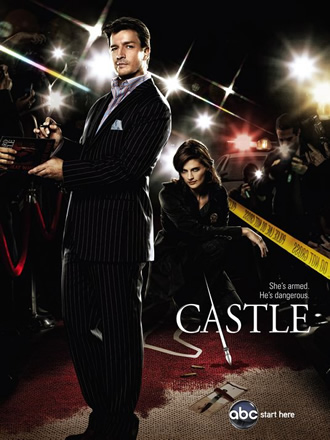 Well, after three rounds of our “tournament” and nearly 7,000 total votes, you’ve decided which “bubble show” you’d most like to see return next season. Did your TV show win? Will it be renewed?

In round one of the game, we asked you to select from a list of 30+ shows that were of danger of being cancelled. It wasn’t easy but more than 1,600 people made their choices and we came up with six clear favorites: Better Off Ted, Castle, Chuck, Fringe, Medium, and Trauma.

In the second round, three of those shows — Better Off Ted, Medium and Trauma — were all left in the dust.

Castle was the clear winner of round two. Chuck narrowly beat out Fringe for the number two spot but Fringe was actually renewed as we closed out the voting so Fringe fans didn’t have much to be sad about.

It came down to Chuck vs. Castle. We suspected that the sci-fi fans who’d voted for Fringe might switch to Chuck and tip the scales but it didn’t happen.

Castle has won our tournament and is officially the show our readers would most like to see return next season. It beat out Chuck by a very wide margin.

Though we don’t control the networks, it seems fairly certain that Castle will be renewed for next season. It’s been holding up well against some tough Monday night competition.

Chuck hasn’t been doing as well and last week, came in fourth place in the key demographic and total viewers. While the peacock network is struggling and has lots of airtime to fill next season, Chuck is far from a shoe-in for renewal.

At the end of this season, there will be 54 episodes of Chuck in the can. It seems likely that Warner Bros. would want to keep it going for at least one more season for the syndication package and might make a deal with NBC. If the ratings remain the same or moderately improve, I suspect Chuck will be renewed for 13 episodes.

So, what do you think? Are the results of our game a surprise? Do you agree with the results or was there another show that’s more deserving of a renewal than Castle?

I think Chuck should be renewed. Forget Castle I’ve tried to watch it a couple of times. Couldn’t get into it. Boring.

I think Heroes,CHUCK, Trauma should all get renewed, awesome shows

I love both shows and I am glad Castle got renewed but I absolutely love Chuck! I hope they decide to renew it. It is the ONLY show I watch on NBC.

i really hope Chuck doesn’t get cancelled! I love that show and i’m sure lots of other people love it too! I don’t care if it moves to another channel, as long as its continues to show new episodes… CHUCK FANS UNITE!!!

Maybe Chuck will get better ratings after tonights show and finally getting “closer” to Sarah!!! You know you were all routing for it too!!! LOL

We like both Chuck and Castle. Chuck could be improved a bit if they do take the group out of BuyMore more often. The chemistry between Chuck and Sarah is so sweet.

Castle is fun, light entertainment with a dark side. It is more fun than Moonlighting was and involves adults, not teens or twentysomethings. If they insist on dressing Stania in those super tight tops, they should let her wear a more natural bra – those “Miracle” bras make her look like a freak.

What is up with ABC? “Better off Ted” is perhaps one of the funniest sitcoms to hit TV in a while and they dump it in favor of what?!?! The whole time “Ted” was aired there was hardly any advertisement for it. When I asked people if they had seen the show they were absolutely clueless as to what show I was talking about. After I talked about “Ted” some of the people I spoke with saw the show and thought it was hilarious. I would be willing to bet that the results of the poll were in direct relation… Read more »

Hope to see Chuck and Ted back for more episodes.

I am so glad to see we are keeping a show that demonstates that not every one in this country is a voyeur or a lying cheating piece of scum (this being the biggest part of the reality shows particpants) Why can’t we show other countries that we are educated, intelligent people? I like something that challenges my brain not turns it to mush. Its no wonder that cable is hitting THE Networks so hard. I love Castle but I also like Chuck. Why don’t you leave a show on long enough for us to get a decent sized audience… Read more »

Love Castle! I’m so happy that it won’t be cancelled. I agree that there should be more advertising… also 10p.m. on a monday makes a late night, but it’s worth it!

Well it’s good news for Castle. ABC should be better about advertising it so that more people will know about it and can watch it.

both shows are badass! i luv em! abc will bring back caslte for sure!! nbc really dosnt have much going for them, so they need chuck ha!

I honestly hope both Castle & Chuck are renewed, I watch both of them on Mondays. Castle definitely is looking better & better both in terms of ratings & story. Chuck, though while it’s still likely to continue, at this point it depends on how good NBC’s development slate and whether it can at least hold its’ current ratings. BTW, Chuck is not produced in-house; it’s produced by Warner Bros., not Universal Media Studios.

@C.J.: You’re absolutely correct. I don’t know what I was thinking. Thanks!