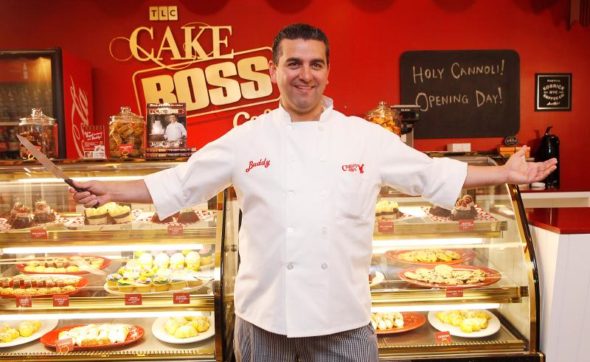 The Cake Boss is back in action! Discovery Family just announced the TV show will return for a ninth season in May.

The long-running docuseries “features Buddy Valastro and his Carlo’s Bakery crew as they create amazing cakes of all shapes and sizes.”

Season nine of Cake Boss premieres on Discovery Family on May 18th at 9 p.m. ET/PT.

(Miami, FL) – Buddy Valastro and the rest of the CAKE BOSS family are back in business on Discovery Family for a ninth season filled with new adventures and spectacular creations. Starting with back-to-back premiere episodes on Saturday, May 18 at 9/8c, Buddy, his family and the loyal customers of Carlo’s Bakery in Hoboken, New Jersey will kick off a new season with even more outrageous and delicious cakes. New episodes will also stream live and on demand on Discovery Family GO, the network’s TV Everywhere app.

“The famiglia and I are back, baby! Season nine is easily one of our craziest with cakes and Carlo’s Bakery shenanigans,” said Valastro. “I’m so excited for Cake Boss to premiere on Discovery Family for all of our fans to enjoy on Saturday nights. We love the chance to bring a little bit of Hoboken in to everyone’s homes!”

Buddy’s imagination works in overdrive this season as the exciting cake ideas from his many consultations become a reality. Dedicated to his ongoing mission to achieve his late father’s dream of making Carlo’s Bakery a household name, fans will witness Buddy in some of his most surprising situations yet. This season, Buddy and his crew design some of the most wild creations to come out of the series including an epic fire-breathing dragon cake built with pyrotechnics, a drive-in movie theater cake complete with a built-in projector screen and even a beef jerky cake! More than 50 years and thousands of customers later, Buddy and his team continue to find a way to embrace every new challenge and create sweets that are larger than life.

CAKE BOSS features Buddy Valastro and his Carlo’s Bakery crew as they create amazing cakes of all shapes and sizes. Family always comes first, and Buddy’s team includes his four sisters, two brothers-in-law and cousins. They along with expert bakers, decorators and sculptors are challenged each week to make the impossible both possible and edible. Together, they tackle mechanical cakes, meaningful cakes, meat cakes and everything in between. No matter what the challenge, the Valastros prove that when family works together anything and everything is possible!

CAKE BOSS is produced by High Noon Entertainment and Cakehouse Media for Discovery Networks International. Scott Feeley and Jim Berger are executive producers for High Noon Entertainment; and Buddy Valastro and Art Edwards are executive producers for Cakehouse Media. To learn more, go to www.discoveryfamilychannel.com, on Facebook at www.facebook.com/DiscFamily and on Twitter @DiscoveryFamily.”

What do you think? Are you a fan of Cake Boss? Will you watch the new season?

Why are there commercials saying the show is ending?