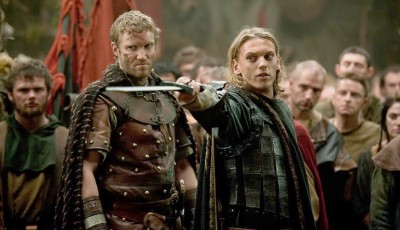 TV show description:
In the wake of King Uther’s sudden death, chaos threatens to engulf Britain. After the sorcerer Merlin (Joseph Fiennes) has visions of a dark future, he installs the young and impetuous Arthur (Jamie Campbell Bower), Uther’s previously unknown son and heir, as king. Raised from birth as a commoner and torn from his home and family, Arthur pursues a kingdom based on justice, hope, and freedom while the lands he oversees are corrupted by violence, greed, and despair.

But Arthur’s cold and ambitious half-sister Morgan (Eva Green) will fight him to the bitter end for what she believes is her birthright. She gives herself over to dark forces that allow her to threaten the court of Camelot from within.

During these dark times, Arthur’s only shining light is the beautiful Guinevere (Tamsin Egerton). She’s innocent and naive, but also ambitious and strong-willed. Guinevere is a source of great support and strength to Arthur as he grows into his role as king. Though she’s married to Leontes (Philip Winchester), one of Arthur’s most loyal knights, Guinevere and Arthur cannot deny the attraction they feel for each other.

Faced with profound moral decisions, and the challenge of uniting a kingdom that’s broken by war and steeped in deception, Arthur is tested in more ways than he could have imagined.

Series Finale:
Episode 10 — Reckoning
Morgan’s plan to overthrow Arthur is exposed but Sybil takes credit for her treasonous schemes. The nun claims that she planned everything and Morgan knew nothing about it. Sybil is executed, and while the public accepts this story, Arthur and Merlin are not deceived.

Leontes dies protecting Arthur at Bardon Pass and Igraine is killed by Morgan. Arthur strips Morgan of the name and banner of Pendragon and tells her that her castle is no longer protected. Later, Morgan visits Sybil’s grave. After hearing a voice that tells her to bear a child, Morgan disguises herself as Guinevere and has sex with Arthur.
First aired: June 10, 2011.

I also just finished Session One from Starz on demand really enjoyed it and would really like to see the continuing story!

Great show! Why does the network keep cancelling the good shows for the stupid ones. I enjoyed this rendition of Merlin!

F#*k me!
What a great show. Looks like it will be replaced by some crap by a bunch of rednecks shooting something, can’t be much left gators, rats or selling something who is in need of some money.

Been over a year and a half since it went belly up. the more people that want this and many other shows like it might make a difference, but probably not. STARZ has been an innovative network to produce such shows as these, its will only makes sense to keep it going, or watch that network fade away like their shows did.

I AGREE! Who does get to decide which shows stay and which go?? This show along with Merlin and many other really good shows get canceled every year and we get stuck with more freakin REALITY T.V. “Jersey Shore, Survivor, Biggest Loser, Hard Core Pawn, Mobbed” really producers enough already! I get enough reality everyday at work and at home, I DO NOT NEED MORE thank you very much! I watch a bit of everything on t.v. and movies but I love the fantasy shows because I can escape to another world for an hour or two every week season… Read more »

Why are you cancelling this show???? It was great!

Please, don’t cancel this show…it is so good.

I’m disappointed that Starz has decided to cancel Camelot. This is an excellent show and we were looking forward to the new season.

This is typical. Cancelling another show viewers love after just 1 season. Please reconsider. 🙁

I’m disappointed the show will not go on. The last show left viewers to believe there was more to come. This doesn’t seem fair to those in waiting for the rest of the story…….

This sucks! I just finished the 10th episode and went online to see about season two. It’s a great show. It must go on!

I enjoyed the series very much and would love to see it continue!

Please don’ take this show off i LOVE shows like this. There are not that many of then on TV.

Us as fans are being ripped off!