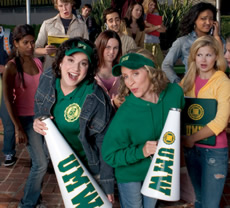 TV show description:
Suburban widow Joan Beamin (Aizley) and married Barri Martin (Sussin) unexpectedly catch Barri’s husband Roger having an affair. The ladies end up in a bar filled with students and ultimately decide to enroll in college. Once in school, they meet a variety of colorful students and faculty members and embark on the wild adventures of college life — complete with one-night stands, sexual experimentation, research papers, and football games.

Episode 20 – Foreign Exchange:
The ladies learn that if they don’t pass their next math exam, Joan will lose her perfect GPA and Barri will fail, forcing her to remain a freshman for another semester. In order to ensure a passing grade, the ladies hire a Korean transfer student to tutor them. As repayment, the ladies offer to teach the student everything she needs to know about America. Meanwhile, a serial flasher wreaks havoc on the campus. Guest stars for the episode include Mindy Sterling, Ed Begley Jr., and Sean Hayes.
First aired: February 2, 2007.

What happened next?
Thus far there has been no news of a reunion or revival to wrap up the series.