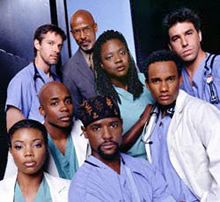 TV show description:
A drama that focuses on the doctors and nurses who work at the struggling Angels of Mercy Hospital in the inner city of Los Angeles.

Dr. Ben Turner (Blair Underwood) is the hospitals’ acting chief of surgery who is devoted to his patients and the community. He reports to his former lover, recently hired medical director Dr. Lillian Price (Vivica A. Fox). Her decisions are frequently scrutinized by the hospital’s CEO, Ron Harris (Michael Warren), and Edwin O’Malley (Robert Morse), the facility’s powerful chairman of the board.

I can email it to you. What is your email address?

Jeff who else should we email we need a lot a support with the Letter, Draft so we immediately get started with this assignment when can we start doing the letter and the draft can we do it today can we also try to email CBS and ask them for their support who else will we ask to help what other information are we looking for

I started on the draft today.

Dr Karen Hunter has a radio show that deals with issues that affect the black community. I emailed her last week. Click on the “Say Something” tab on the following website: http://www.karenhuntershow.com/

There is a comment page that will let you leave your message and your email address.

Jeff who else do we need to send emails out to what about CBS we need to send an email out to them to tell us to help us with this letter anyone else that can help us with the letter, the Draft can you email did we already email CBS do they have an email address we can email Steve Harvey to help us get City of Angels back on YouTube Also Tom Joyner we need to Email a lot of people to help on this letter, Draft how can we write the letter to everyone that can help… Read more »

Jeff who else should we send the emails out to

Jeff what is Hill Harper’s email address I can also email Steve Harvey Roland Martin and possibly Oprah what about Hill Harper I can Also send the emails out they can help us do the battle do you think that is a good idea what else should we do Next after we do the letter and send them out anything else that we need to do besides the Draft.

Do you have Microsoft Word on your computer?

If so I can write the letter and email it to you. It will be a form letter that each of your friends can sign and mail to CBS, Ebony, NAACP and any other organizations. The good thing about a letter and email campaign is that the organizations will receive communications from many people. Hopefully we can get someone’s attention.

Brittni, To be honest I just want to get someone to respond to my emails and provide the name, phone number and address of someone in authority who can make a decision. I can draft a letter to the networks and other organizations. A generic form letter will do, that way friends, family can mail additional letters. I can email you a draft copy of the letter. Keep in mind that this is an uphill battle that is worth the effort. I emailed Hill Harper and Roland Martin. Next I will email Steve Harvey and possibly Oprah. I contacted the… Read more »

I would ask Ebony if they can help with getting City of Angels on TV during Black History Month. I would also ask them if they can influence CBS to release the show on Youtube, Hulu or DVD. It was great that we have a movie like Selma but we really need more positive images of black people on TV. In my opinion Empire is just one aspect of our culture, we need some positive images. Young people need to see doctors, professionals and hard working men and women. What we really need to do is put a letter together… Read more »