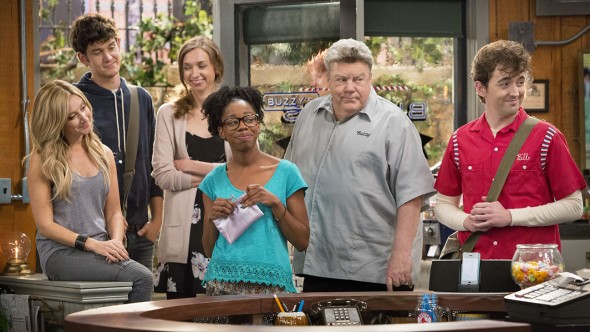 Now, they find themselves working together at Buzzy’s in Charlestown, Mass. Their dreams may lie across the Charles River in Boston, but for now, their work, lives, loves and other worries remain in the town they grew up in.

The shop is owned by abrasive Ben (Ryan Pinkston) and the glue that holds the shop together is its namesake — Buzzy (George Wendt). He’s a gay old-school barber who has a gambling problem. His boyfriend is Tommy (Reginald VelJohnson), a parking attendant.

Series Finale:
Episode #10 — Reunion
The gang relives their adolescence at their high school reunion. Meanwhile, Joy is stuck at the barbershop keeping Lonnie company while he waits for his date.
First aired: August 18, 2015

What do you think? Do you like the Clipped TV show? Do you think it should have been cancelled or renewed for a second season?

I really liked this show and hope it is renewed! It’s funny!

I love it funny as heck

I found this show yesterday and binge watched it. As a barber, I love the setting and the characters. I agree that the show is just good fun and please don’t cancel it!

We enjoy how light and funny the show is. It has funny, edgy jokes and a good mix of characters. We hope it continues!

My husband and I have just discovered Clipped. We are so very happy it will be back next year!!

I love this show and I love every cast member, except for the three sisters I can do without them…. so many people can relate to this show because of the different cast selection and it’s funny, it doesn’t offend anyone… please do not cancel this show I loved every episode… can’t wait for the next season

I love this show! I live in Boston and the accents aren’t too bad. It’s a fun show and I like the chemistry between the cast. George Wendt (Norm!) is fun as a gay man with a long time boyfriend! I especially like Moe. It’s a perfect summer show…not too serious and just fun. I hope it gets renewed!

This show is so funny I hope you aloe it to grow and develope its characters .. I work in a salon and believe it or not it’s Brett close to the real life in the salon industry !!!!

So many want to be critics. Clipped is just fun. Lighten up and laugh a little.

This was painfully bad.

Please cancel this garbage immediately. It is simply garbage. It literally makes me sick. The only show that i can even think of as bad as this one was the one where john goodman played a gay guy n it was only half as bad as this trash.

LOVE this show!!!! The final scene in the shower last night was a riot, Pinkston had me crying I was laughing so hard. Great Job! TV Gods have to give this show a second season It Has Legs!

Cancel clipped. I tried watching and so f’d up I threw up in my throat. Race jokes aren’t funny. the Gay jokes on Clipped are in horrible taste. Just stop the production on Clipped so I don’t accidentally view it after laughing my ass off with reruns on a funny show (Big bang theory).

Oh mah god. The genius of these plot lines y’all. As a member of middle America ages 18 to 53, I will never stop watching this. Them jokes, them jokes, like that one that discretely references sex, they my favs. #bestdayofmylife

It is hard to judge a show by one episode. I really like Ashley Tisdale. She was great on the Disney Channel and is awesome on Young and Hungry. I hope the show stays on.

So far, it’s just ok. Hopefully next week will develop a better story.