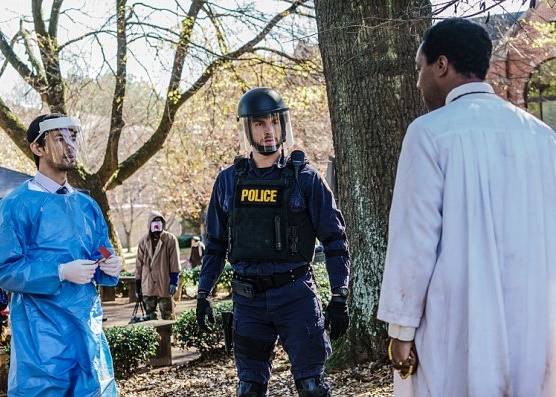 Containment TV show season one and series finale (The CW).

Containment was cancelled by The CW back in May, but the network let 13 one-hour episode drama play out. In the wake of last night’s unintentional Containment TV series finale, Executive Producer Julie Plec talks about her plans, had The CW renewed the quarantine drama for a second season. 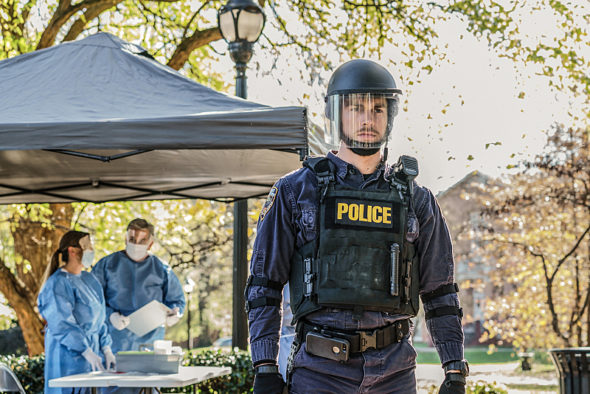 EW asked Plec what she would have done with Containment, season two:

We had so many plans, and what’s exciting to me, in the midst of my despair, is that the Belgian company has made a second series of the show, so we get to see their story continue on. Maybe if nothing else, more people will watch that now that they don’t get to watch ours.

We really wanted to spend a season dealing with the day-to-day community building of being inside a quarantine that feels like it might never end and really explore what society goes through when they are essentially left to die. And then we were planning on building a really tremendous conspiracy outside the cordon that Leo Green was going to be chasing in a great kind of All the President’s Men way as he connected the origins of the virus back to a big pharma company. We wanted to see what it was like for Lex to end up in a community where suddenly Jake was really, for all intents and purposes, the mayor, and what conflict that would create between those two friends. We wanted to see Jana as the mama bear queen of the community as we see people starting to experiment with how do we communicate, can we have radio, how do we get the message out, how do we educate our kids? What’s poor Quinton going to be like as a teenager growing up in this community? What are the other kids? Are they troublemakers? We had a lot of plans. And I’m super sad that we’re not going to be able to tell those stories.

Plec tells TV Line what she would have done differently, had she known Containment would only run for one season:

Well, if I had known that from the beginning, I would have finished the story. I would have found a way to find a cure and see a sense of hope that the quarantine would be lifted. We got pretty close to that, coincidentally, so that’s good. But I would have liked to see it go on for another chapter in order to tell the other half of the story.

Plec went into even more detail with TV Line, about her plans, had The CW picked up Containment season two.

TVLINE | What was in store for a potential Season 2?

We had the conflict at the hospital. As the entire community is waiting for the virus to die out, knowing they won’t be free until it does, Dr. Cannerts comes up with a way to keep people alive, even though they’re symptomatic. So there’s a bunch of people, diseased and able to spread the virus, that he’s keeping alive and healthy but still infectious. Suddenly, these people who just 20 days ago were outraged to be placed in a cordon find themselves having to cordon off an area within their own zone so that they can potentially avoid infection from the people at the hospital. So we had a great cuckoo’s nest kind of division: the hospital filled with sick and dying people versus a community of people trying to build and hold on and survive in functional ways by deciding what to do about communication and law and martial law and how to feed themselves and how to teach their kids and how to be intimate with each other — all the things that you need to have when you’re stuck somewhere and you’re not going anywhere anytime soon.

TVLINE | How would Lex have adjusted to being inside the cordon?

The adjustment would have been complicated for him, because he’s used to being the guy in charge. He’s the Major, and here he comes into a town with less than 10 cops, where Jake has stepped into, basically, an ad hoc mayoral role within the community [and] where normal law does not apply. And yet, Jake is such a by-the-book guy, he would have had quite a wake-up call in terms of how to navigate within this new world.

TVLINE | Jake went on such a journey in Season 1 with Katie. What love interest could you have possibly introduced for him that fans wouldn’t have revolted against?

We had a new lady friend that we were planning on, quite literally, dropping from a helicopter into the middle of the quarantine zone, but certainly knowing that it wouldn’t be easy to get romantic anytime soon. But we definitely had a new scene partner for him that we were excited to explore.

TVLINE | After the finale, I had to wonder what Katie would think of the fact that Quentin did not get out of the cordon after all.

She would still be rooting for an alternate exit route. Season 2 would have continued to be about ways to eventually get healthy people out of the cordon. Quentin’s destiny, certainly — unless we had to “Walt” him because he was growing too tall [Laughs] — was to make it out safely. I can’t see it ending any other way. 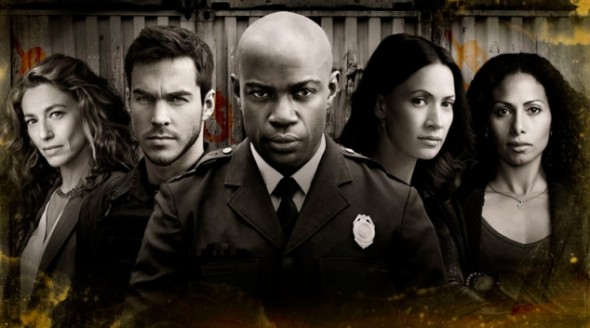 Did you enjoy the Containment TV series finale? Even though it was not planned as a single season show, do you think Containment‘s first and only season told a complete story? Sound off in the comments!

I was soooooo pissed!!!! Honestly I want to cancel Netflix cause they just screwed up!! I was so on edge all through out this show and they screw it up!!

I never watch the CW anyway, so I only knew the show from Netfilx. I really liked it and had I known there was only 1 season, I wouldn’t have started watching at all. I am sorry but this was a good drama that was on the wrong network. I hope Netflix will see value in this being one of their productions. Personally, I now think less of pre-pubescent TV (aka CW) than I did before. This was a quality drama and it needs to be picked up for a way to finish the story at least.

I’m pissed! This was a really good show!!

I must say, I really enjoyed the 1st season a whole lot but now I’m mad as **** I watch it because I NEED MORE!!! I feel so incomplete, wishing I had even jus one more season to answer so many unanswered questions. Very Disappointing

I actually just found this show on Netflix and I’m almost to the end of season 1. I am now disappointed to find out that there will not be a season 2. The show is awesome is a great drama with action love and everything you want in it. So can someone please make a season 2 forget the CW find another station that will put it on thank you.

I loved this show was hoping to see it finish to the end of the story.
It makes no sense to only have one season of any show. I am not sure how they think they have a rating and an age group. No one has ever asked anyone I know for their opinions.

One more thing Chris wood love you one of my top favorite actors I love to watch. Like I’ve watched almost everything you’ve acted in #stalker #number1fan #chriswood #sexy

This show was the only Thing I had not to sound dramatic but I loved it. Like the others are saying this tv show did not deserve to get cancelled and chosen over dumb ones. This tv show had potential and great actors time that have gone to waste because there is no second season. If you want to help instead of readying are comments do something about it this show needs to picked up and brought back to life this is no ordinary tv show about love and romance and boyfriend drama. It’s a bout a community coming together… Read more »

Why do they always cancel the best shows & let total crap stay on forever?! This was a really good show, good content, well acted & shot and not at all cheesy. Like other people are saying this would be GREAT on Netflix or Amazon Prime (They did a great job with Fortitude – another show that went away far too soon).

Netflix we are calling out to you! PLEASE PLEASE PLEASE make a deal with these people so you can have the Containment Season 2, so many people loved this show and still do worldwide please do us fans a solid and help us out! I’m so guttered that they cut this show it had potential and was different to your usual the walking dead or fear the walking dead which really are the same thing. I really really really wish this would get picked up again! Loved the show thank you for season 1 🙂

I was just thinking earlier about this show and wondering if there’s a Season 2 yet. Went online to search and sadly found out the show is canceled. I really liked the show and wanted to see what would happen next. Will there be a cure for the virus?! Continue the show please!!!

I found this show on Netflix and binged it in 2 nights. It was different, held my attention, and could, plausibly, happen! Imagine my total dismay when I found out there is no season 2!! What the heck?! If CW is too stupid to renew this show, then Netflix needs to snatch it up before all these wonderful actors are given new jobs. Come on Netflix, do us fans a solid!!!

I really liked it sad no season 2

I loved the first season as with many of the CW Shows… And as usual
They cancel another good one.
I’m really getting disappointed with this network.
It seems that every new show that I really enjoy ends up biting it!
I think I may have to find another favorite network.
Cancelling the Vampire Diaries and The Originals, I really don’t have anything left to watch.
Oh well,
It was good while it lasted.