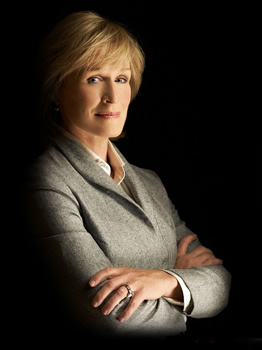 Good news! Damages has been saved from cancellation and there will be a fourth and fifth seasons. Unfortunately, not all of the show’s fans will be able to see the new episodes.

Damages revolves around Patty Hewes (Glenn Close), a tough New York attorney. She takes on tough cases and will do just about anything to make sure her clients come out on top. Prominent castmembers have included Rose Byrne, Tate Donovan, Ted Danson, Zeljko Ivanek, Noah Bean, Anastasia Griffith, and Philip Bosco.

The FX series has been declining in the ratings for some time and the third season finale only drew 925,000 viewers. The cable channel said that they couldn’t afford to keep broadcasting the show based on those numbers. They also said they’d be open to some sort of partnership deal if Sony could find another buyer (ala the shared airings of Friday Night Lights between NBC and DirecTV).

DirecTV has come to the show’s rescue but is financing new episodes for exclusive airings, in a similar vein to the deal they made for Passions a couple years back. This means that viewers who don’t have DirecTV won’t be able to see the episodes.

“FX was very proud to have developed one of the best scripted series on television, but, in order to have a future, the show needed DirecTV and we are thrilled they stepped in,” said John Landgraf, President & General Manager, FX Networks. “Sony Pictures Television is a great production partner and we at FX Productions are excited for these next two seasons.”

Under the exclusive deal, DirecTV has ordered 20 new episodes of Damages that will play out over the course of two seasons. They’ll air on DirecTV’s exclusive 101 channel in 2011 and 2012. The satellite provider has also acquired the rights to rerun the first three seasons of Damages.

For those without DirecTV, the episodes will surely be released on DVD at some point.

What do you think? Are you glad to hear that Damages has been saved? If you don’t already subscribe, would this news make you consider ordering DirecTV?

This is really disappointing. I loved this show! Glenn Close was wonderful and Damages always had an excellent cast. I don’t have Direct TV and I’m not going to get it, so I’m basically screwed! Guess I’ll have to get future DVD’s.

OMG. How could they take such a wonderful, intricate, exciting show off the air. The one drawback for some may be that it was on at 11pm at night. But we recorded it. Wouldn’t think of missing an episode. I was aghast recently when I read the show had been cancelled. It just goes to show you that there are a lot of people who just don’t appreciate a quality show with of all people! Glenn Close who is as good as it gets.

FX you looked a gift horse in the eye and gave it away. Instead, you will run other shows that can not hold a candle to just series. The Shield, Nip/Tuck, “The Riches” , and now this one. What next SONS of Anarchy/ Rescue Me/Archer/The League. You get great shows with casts, directors and such and then you don’t know how to keep them going. What a waste. Tread lightly. my wife wants me to get rid of FX TV to save money. I refuse. But you keep taking away good shows and I will probably cave in and drop… Read more »

Damages is a superb production with outstanding acting, fresh dialog, imaginative sound design and meticulous editing. Its rich artistic quality rewards repeated viewing. I’ve already purchased all three past seasons through iTunes and will certainly purchase upcoming seasons should they become available through that distribution channel.

This absolutely sucks! I do not have DirecTV and I personally know of only one person who has a subscription with the satellite provider. I will not knpow how the last 2 season end the series which I have enjoyed form the beginning. ‘Damages’ will loves over half their fans. It’s a real shame. Shame on Sonly, FX, and DirecTV for not allowing for later broadcast on cable.

one of my all time favorite shows – too bad I won’t see it until its out on DVD…if I haven’t lost interest by then.

I am heartsick that only those with DirectTV can see these shows. I have TimeWarner and have no intentions of switching to DirectTV but I now know I would never go that route. TimeWarner or Fios. Bah, Humbug!

Unfortunately I do not have DirectTV so will not be able to see the upcoming season. I looked forward every week to Damages and thought it was one of the best ever television series. A big disappointment. Hope it comes out on DVD.

and they wonder why people download shows off of the internet. oh you can watch some of the episodes but if you want to watch them all you have to have diectv???? what a bunch of BS.

I am greatly relieved that Damages is going to continue as it is far and away one of the best tv shows I have ever seen. The writing and the acting are superlative, the characters complex and engaging, and the way it moves backward and forward in time keeps the suspense intense. I love this show.

It’s one of my favorite TV shows and with the number of emmy nominations, I can’t believe FX dropped it and left me hanging not being able to see the series finale. It’s insane.

Love the series. It is the best one I have seen in years. Very happy that it is to continue.

If it’s “one of the best scripted series on television,” why have its ratings tumbled? Is this a blame the audience moment?

Lucky I never got into the series.