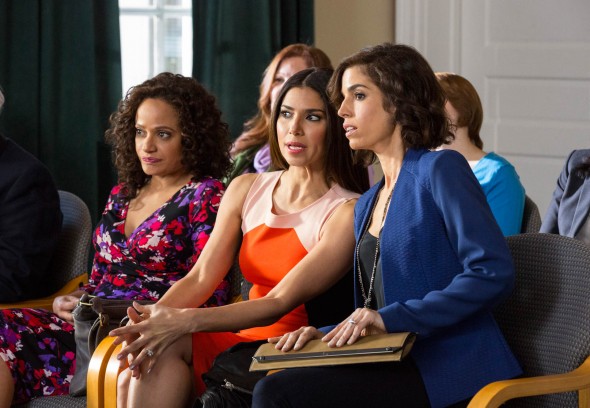 It appears that there’s still a lot of dirty laundry. Lifetime has renewed their Devious Maids TV show for a third season. The 13 new episodes will debut sometime next year.

The second season of Devious Maids concluded in late July and averaged 1.81 million viewers each week. That was down by 29% compared to the first season. It’s still the cable channel’s highest-rated scripted series. The Lottery draws about half that size audience and it looks likely to be cancelled.

LOS ANGELES, CA (September 26, 2014) – It’s been a Devious two years at Lifetime and the network is set to get even more Devious in 2015. Lifetime has renewed its hit series Devious Maids (#DeviousMaids, #DeviousArmy) for a third season, placing a 13-episode order for the program executive produced by Marc Cherry and Eva Longoria, and starring Ana Ortiz, Dania Ramírez, Roselyn Sánchez, Edy Ganem, Judy Reyes and Susan Lucci. Produced by ABC Studios, Devious Maids will return next year. The announcement was made today by Rob Sharenow, Executive Vice President and General Manager of Lifetime.

“We are thrilled to be bringing Devious Maids back for another season. Marc Cherry has created a uniquely twisted world that blends his comic wit with devilishly ingenious characters and plot twists,” said Sharenow.

Devious Maids is set in a world where murder and mayhem collide in the mansions of Beverly Hills’ wealthiest and most powerful families. Class warfare has never been as fun and dirty as it is in the tiny enclave where the staff is as clever, witty and downright devilish as their employers. The series centers on a close-knit group of maids, Marisol (Ortiz), Rosie (Ramírez), Carmen (Sánchez), Valentina (Ganem) and Zoila (Reyes), who are bonded together by their jobs, life struggles and the melodramatic universe that engulfs their employers. Devious Maids also stars Grant Show, Rebecca Wisocky, Tom Irwin, Drew Van Acker and Mark Deklin.

Season two of Devious Maids, which concluded July 13th, fueled Lifetime to be the number one cable network in its Sunday 10-11pm time period with Total Females, Women 18+, Women 25-54 and Women 18-49. In its freshman season, the series was Lifetime’s fastest-growing drama ever.

What do you think? Do you like the Devious Maids TV show? Will you be watching the third season?

please bring them back

Curly Sue. Wake up it is a story line.
As for Devious Maids love the show. Totally awesome.
Everyone on the show is fantastic.
Sooner the better to see them back on.

I was so happy to read about Devious Maids returning. One of the best shows on network
TV.

Definitely, I wish it was on every Sunday night year round like Desperate Housewives used to be.

I love Devious Maids and am wondering why the hold-up on airing the show????

I can’t wait for the new season. I love that this show explores the American Version of “upstairs downstairs” . Each character is explored individualy as well as part of the group. It is the best show about a group,of women since Sex in the City…and WAY more relatable!!!!

My wife an I enjoy the show. When does season 3 begins.

Love the show just read that it had been canceled then renewed I’m so glad been looking f or it to come on Can’t wait, we have a get together every Sunday night when it comes on so all of the family an friends can watch it, it’s like super bowl Sunday football for us

I’ve been waiting for devious maids to come back on!I love that show..

If I can find the program on Comcast. I will watch it. Loved it!

Bring back Devious Maids. I love it!!

I love this show and am happy to see it return. I am however sick of Susan Lucci. As long as I’ve watched her “All My Children” she denies her age and gets younger every year. She has to make a big real of her age on both shows. She is now 10 years younger than reality.