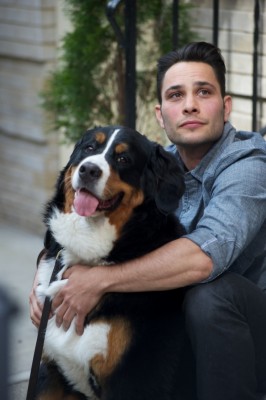 Better than the Dog Whisperer, hopefully it will be renewed. An alternative reality besides all of this negative Jersey Shore, Kardashian garbage. If they can get renewed why can’t something positive? Maybe if the dogs were 16 and pregnant…….lol

I agree the show didn’t have enough advertisement! This show is great, I have two dogs that doesn’t listen all that great and I’m learning how to handle it by watching Justin. He’s great in showing and telling me what to do with them. Please we look forward to Wednesday nights now waiting by the tv to watch it at nine. Give it another season and put ads in magizines about it, you have to do more so people know it’s on. I was checking to see when it starts again.

I am thinking positive thoughts about Dogs in the City getting renewed. Oh please, please, please! My theory is that more people heard about how good the show was after the season was over. Everyone I talked to about the show had never heard of it until it was over. I just happened to see the frist episode myself by accident. So glad I did and I certainly hope there are more. I know of very few people that don’t need a little or, more often, a lot of help with their dog/s. Justin makes the problems/issues make so much… Read more »

I loved the show. I think Justin is adorable! Anyone who is devoted to dogs like him in my book is a saint! NYC, is a mecca for dogs and is great for people to see doggie issues and to have them solved. Why can’t a network have a show about dogs? Right now network has such garbage on, that this was one of the only show I was watching on network TV!!! CBS should give it a chance. Perhaps the time slot was not right. CBS, RENEW IT!!!!!

We really like this show and hope it’s renewed. We watched LIVE and that’s quite a compliment in this household!

Not a bad show, but it was on the wrong net. I believe it would run a long time on the “Animal Planet”. Dogs were not originally “city animals”, and a concrete jungle is an alien environment for them. The owners must remember that dogs generally “relieve themselves” wherever they are when the urge hits, and the owner must be prepared to deal with it, as most cities have “Pooper Scooper” laws. (Not to mention hot sidewalks, and especially hot blacktop!) Hope CBS deals this show to another net insteada cancelling it. Clearly, it won’t survive on CBS.

I LOVED THIS SHOW! There are so many reality shows showing some garbage of people hollering, screaming, or crying that I’m sick of it. Justin Silver at least did some good for these people and their dogs and it was also informative to myself and I’m sure others. I think if the time slot was an hour later, more adults would watch this show.

enjoyed the show and the way he helped the owners. I thought he was very genuine and caring about the dogs & the owners.

I love this show and hope it will be renewed! Maybe they should try it in a different time slot. Great valuable tips for dog owners and so much better than all the stupid reality shows on tv. He is so right…most of the time it’s the owners that need to be trained, more so than the dogs. We are dog-walkers and dog-sitters and we’ve told people what a wonderful show it is and then it was suddenly off the air. It doesn’t deserve to be. PLEASE RENEW!!!! We need more shows like this.

The reason people didn’t watch it is because they couldn’t relate to the very wealthy Manhattan high-rise dwellers.

Unfortunately I was hoping more from this show. My wife and I totally love “The Dog Whisperer” Cesar was informative and to the point. On “Dogs in the City” Justine seems to spend more time telling everyone how great he is instead of concentrating on the dogs at hand. However I will say the show did emphasize how to care for dogs in a city surrounding which in itself should be helpful for city dwellers.

Personally I loved this show and learned a bit more of how to curb my little guy’s behavior. Let’s face it, people just don’t like any show that has content to it. Now my question is why this wan’t on Animal Planet, I understand it was an experiment by CBS but wouldn’t this show make more sense on a network that caters to animals specifically? Not to mention they would receive far more of a following considering the kind of audience that frequents the channel?

It was a sweet show that showed dogs in a great light. In almost all cases, the problems really weren’t the dogs fault…it was their human’s problem. I loved the show and I hope it comes back.

If CBS is smart….they cancel this crap….dumbest idea ever…..all those who like it….are insane….just like Justin Silver….who I hope they put him in a padded room, because he is nuts….