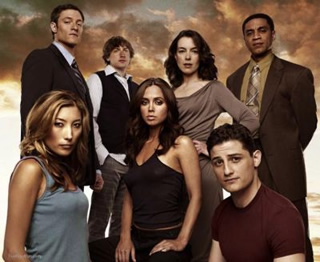 With such low ratings, it had to happen eventually. The Dollhouse is closing after two seasons on FOX.

From the mind of Joss Whedon, Dollhouse revolves around a group of people whose minds are wiped of their own identities and implanted with temporary memories for jobs-for-hire. The cast includes Eliza Dushku, Harry Lennix, Fran Kranz, Tahmoh Penikett, Enver Gjokaj, Dichen Lachman, Olivia Williams, Amy Acker, Reed Diamond, and Miracle Laurie.

Though loved by many fans, the series has been ratings-challenged from the start. Surprisingly, Dollhouse received a second season order last May, despite low ratings. The second season’s ratings have been even worse but FOX publicly committed to at least produce and air all of the 13 ordered episodes.

While it looked highly unlikely that Dollhouse would be given a full season or be renewed for a third year, many fans have been hoping that it would still happen. After all, conventional wisdom indicated that the series shouldn’t have been renewed last year.

FOX has now officially cancelled the series. Production is currently underway on episode 11 and all 13 installments will be completed.

Whedon had previously said that he was planning to include some amount of closure in the last episode of the season. The FOX announcement is likely timed so that he can give the show a more definitive ending.

Dollhouse is currently on hiatus. It’s expected to return to FOX on December 4th and begin burning off the remaining nine episodes of the season in double installments.

What do you think? Are you surprised by the cancellation or were you reconciled that it was going to happen? How would you like to see it end?

I too never got around to watching while it was on, but after spotting it on Netflix I thought I’d check it out. I was amazed at how well-written and acted this show was! I’m convinced that Joss Whedon is a genius who has no business dealing with FOX. Their creative department knows a good show when they see it, but the rest of the network – the promotional dept and the Bean Counters – they have no clue how to hold onto a good thing. I am very disappointed that there was no season 3 and that the time… Read more »

Dollhous was a awsome show and I miss it very much. And I must say I was very disappointed when it ended. I wish there was A way to bring it back on. Or atleast show the intire series in reruns.

Bull! Great show! Dollhouse was fantastic. its fox who dident do there job on promoting. I showed a bunch of people, there two responces were, i dident know what it was about. Then they see it and love it. Idk fox how many times to u have to be stupid in my life. Wake up fox

I totally agree with you Corey. I watched it after I did watch a few when it was running and I loved it. They put these really great shows on and then cancel them all the while running really bad shows on for years.

Thoroughly inventive/genius script. Casting to match. Even my husband enjoyed all
thriteen episodes. I was tuned in by my daughter via Netflix’s and could not get enough.
My husband even watched them with me a second time. I believe I lost interest during the pre-season campaign whereby it just seemed like another hit the evening with high visibility Soap Opera style with women bedding men. Such was the story like of sex/manipulation of women in the Pan Am… series which crashed…even though the pre-season trailer did not reveal same ‘ole, same ‘ole. It crashed.

Very sad to see the show was canceled! I just started wathcing it on Netflix and LOVE it… Very frustrating as it seems every show on fox seems to get canceled before it even really starts! Big bummer is all I can say………….

This suck I loved that show what the f*** fox

I loved both Tru Calling and Dollhouse. Eliza is such a great TV actress! I don’t understand how shows like American Idol and Sweet Home Alabama can survive but shows with such imagination and back story can be dropped before they can blossom into a season three. Joss has so many wonderful ideas. I hope they can get him back to the CW and if we rally we may be able to get this one kicked started again, or something even better!!

Agreed, I loved Tru Calling and Dollhouse. Hopefully Eliza and Joss can team up again for something soon. Joss is pretty disillusioned with Fox, but The CW could be a good home for his next show (although he’s pretty sour on network television in general, not that I blame him).

I wondered what the plan was when i saw the finale of season 2, everything seemed rushed, now i see why. dollhouse is an amazing show, im surprised to learn it had such low ratings and gutted to find that there will be no third season. joss has it in him to bring dollhouse further. low ratings should be nothing more than a call to arms. can’t wait to see what he comes up with next…definitely cast eliza, she’s amazing. by the end of the second season i was getting into that show in a big way. i thought the… Read more »

I watched most of the 1st season of Dollhouse, NEVER expecting it to be over soooo soon!!!! So I need to get most or all of the second Season at little to NO COST !!!!! As much as I LOVED that show, with todays economy, just cannot afford much. I have been to many places on the WEB that CLAIM it is TOTALLY FREE DO WATCH OR DOWNLOAD DOLLHOUSE. So when I try to, they want me to download this and that, saying that I do not have the proper programs to run this Dollhouse. BUT I DO!!! CAN ANY… Read more »

Both seasons are on Netflix

The reason theses great shows, ( Doll House, Hex, True Calling etc ) have low ratings and end up getting axed is because 1 their put on sky tv which not everyone has, and 2 their put on at a time when the people that would watch and do like them are not always able to watch them. Try putting them on a normall freeview channel at a diecent time and watch the ratings rocket. Also If the shows were aimed at a British audience they would have a longer and better shelf life because us Brits need that escapisum… Read more »

i am so upset! i just started to watch it on netflix and its a great show i can not believe it got can canceled!

I am addicted to Dollhouse. I have to work long hours at work so I wasn’t able to watch it while it was airing on FOX but I has watched almost the entire 2 seasons in the last week. I’m truelly upset there will be no third season.

it was a really good show, idk y it got canceled

I know that dollhouse hasnt been on long in AU im sure we are only about half way though first season guessing only. I saw the tv add for it and thought it looked S*** just from the add. Anyhow a friend of mine downloaded both seasons i sat down to watch it with them just to see what it was. We have now finished watching both seasons i must say that it had a story line they could take all most any where but i must say the last few episodes were VERY disappointing. It looked like the show… Read more »