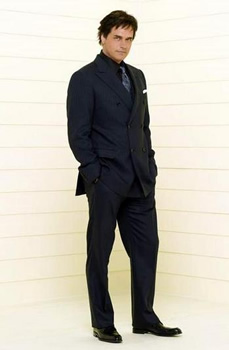 PLEASE bring back Eastwick!!! I loved this show!!! I looked forward to this all week long. Wednesday nights was my favorite night. I can’t believe it was cancelled. I am with CU on this one. You guys never advertised so how was it suppose to get good ratings, though I think 4.4 million is pretty damn good. Thanks for letting your viewers know it was cancelled. The only way I found that one out was I google it. I am soooo sick of reality shows as well! PLEASE PLEASE PLEASE bring this one back!!!

wat do u mean “Cancelled”, i was already addicted 2 this show only 2 find out it’s cancelled, ABC u can’t do this 4.4 million viewers are sure a lot of people, do u expect d whole world 2 b watching it, thank God 4 internet if not i won’t have known this wonderful series ever existed cuz u guys never advertised it on TV cuz i never even saw it with my own eyes so u guys (ABC) have no right 2 cancel this series, Please put the show back on air 4 us and we promise u won’t… Read more »

I’ve just watched the final episode and i cannot believe that it’s just going to be left like that, with all those unresolved storylines! It is very very frustrating I cannot believe it!

ya you get 4.4 million viewers to a movie at a theatre in one weekend and it’s a box office HIT, but you get 4.4 million viewers a week and it’s a reason to cancel it? Makes no sense and I’m in Marketing. Everyone I knew watched that show, men and women, the women liked the witches and the men associated with the devil. I mean come on why are you guys shooting yourself in the foot. I mean Ugly Betty? How much more can go on on that show? It’s too predictable and even my girls have stopped watching… Read more »

Yeah I really wish they would of kept it going, I know my whole family watched the show, and I LOVED it! I’m for real, I do not watch ABC anymore because of them canceling Eastwick, I mean that had to of been the best show they ever put out… I was wondering for the longest time if they was just ending a season and getting ready for a new one, then to come and find out I’ll never see it again!!!!!!!!!! I’m with everybody else in wanting the show to come back. Like a lot of you said, 4… Read more »

HEY…” FRIENDS “WAS NOT HIGH ON RATINGS IN THEIR FIRST SERIES?????
YOU HAVE TO GIVE IT ONE MORE TRY?

Loved the show. Set it up on series link so that I would never miss an episode….thought something was up with the ‘planner’ as it didn’t record this weeks episodes. Logged on to this web-site and found out that it won’t ever be aired again!!! What’s going on…..? Just as you get engrossed in something it’s taken away! 4 million viewers!!! That’s one heck of a lot of people left high and dry!!…..BRING IT BACK

Just read that the show has been canceled. So far I thought they are just on a winterbreak like many shows. This really stinks!!!!!!
I never watched it on TV cause my hubby did not like it but I always followed online the day after. I am getting really tired of watching shows and then they get canceled and you never know what happens. Real stupid and it stinks…

I can’t believe that ABC cancelled such a good show!!! The problem with viewers dropping was that you never knew if it was going to be on Wednesday or not. Every time I would wait anxiously for the Wed slot to watch the show, something else would be on instead. ABC needs to give it a chance to see if it wasn’t just bad scheduling that made the viewers drop. I never knew if it was on or not!!! Bring it back ABC……you won’t be disappointed!!!

I DIDNT REALIZE THAT 4.4MILLION VIEWERS WAS TOO FEW TO KEEP A SHOW GOING. THATS RIDICULOUS, 4.4MILLION PEOPLE ON THE LAST WEEK IT AIRED, THATS ALOT OF UNHAPPY PEOPLE ABOUT THIS CANCELLATION.
HOW BOUT ABC PUT ON SOME ADVERTISING FOR THE SHOW SO THAT PEOPLE WOULD KNOW IT EVEN EXISTED.

I’m so completely disappointed, I just found out Eastwick has been cancelled. That blows!!! What a fun show for women, even my husband enjoyed watching it. Eastwick was something different for a change, and had such a great cast and storline. I’m so upset that we didn’t even get to finish the season.

You go Jenna, I agree!!!!! Bring back our show, there are even unaired shows. Shame on ABC.

God forbid there is something that moms want to watch after putting the kids to bed that isnt a crime drama, or a hospital show or one of those overkilled reality shows. Something that is just fun and easy to watch to help us unwind. But then they cancel anything that isnt violent or has bad langauge or stupid. SOOOOOO over all those reality shows.

Don’t worry people at the rate ABC’s going, cancelling all of their good shows, maybe another network will buy them out like NBC, CBS or HBO and then we can have all of your favorite shows back…

Boooooooo!!! This sucks! This was one show that I looked forward to, all week long! There isn’t a whole lot of shows with witty humor in it, which is one reason why I like the show! And now, poof! Gone. All the good shows with great humor, excitement, wit and clever ideas always get canceled. So the supernatural thing is becoming a little extensive and overdone. It’s the character of this show that I liked, not the fact that it was witches and magic. It was what they did with it that made it worth watching.