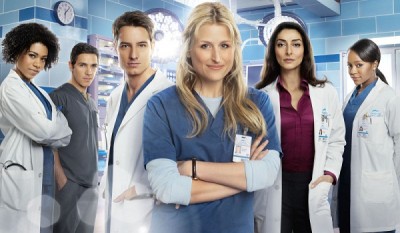 TV show description:
Emily Owens (Mamie Gummer) thought that she was done with the world of high school. After all, she graduated years ago and has now finished medical school as well. Unfortunately, her years as a geeky girl have come back to haunt her.

Emily is beginning an internship at Denver Memorial Hospital, a facility where her med-school crush Will Collins (Justin Hartley) is also an interning. Unfortunately, her high school nemesis, gorgeous and popular Cassandra Kopelson (Aja Naomi King), is also interning at Denver Memorial as well.

Another intern, Tyra Dupre (Kelly McCreary), warns Emily that the cliques at the hospital are all too familiar: the jocks have become orthopedic surgeons; the mean girls are in plastic surgery; and the rebels are in the ER. Tyra has her own awkward place as “the principal’s kid” since her father, Doctor Tim Dupre (Harry Lennix), is the chief resident. Tyra latches onto Emily as a new friend, and immediately begins confiding in her. Nothing is too personal to share with Emily — Tyra is a lesbian, that she hasn’t come out to her father yet and she’s interested in dating a certain nurse.

Emily soon realizes that the long-standing rivalry she had with Cassandra back in high school is only going to grow. Both Emily and Cassandra are competing to impress brilliant Doctor Gina Bandari (Necar Zadegan), a world-famous cardiothoracic surgeon who’s been an inspiration and role model to both of them for years.

While Emily and Cassandra vie for Doctor Bandari’s approval, they’re also competing for Will’s attention. Handsome Will and Emily were friends in medical school but Emily was always hoping for more. Will has made it clear that he likes their relationship the way it is — as just friends. Emily struggles to convince herself that being friends with Will is enough, but it bothers her to see Will and Cassandra even talking with one another.

Meanwhile, Emily is also getting to know Doctor Micah Barnes (Michael Rady), a nerdy yet smart and handsome resident. Micah is faced with serious medical issues within his own family, and Emily’s compassion proves an invaluable help. Impressed with Emily’s medical skills and warm bedside manner, Micah brings her in on a delicate surgery and talks her through the procedure, boosting her confidence and bringing them closer — both professionally and personally.

With the long hours, the heavy workload, and personal drama filling her first days as an intern, Emily still fees like she’s the new geeky kid all over again. It’s just as awkward as high school. Somehow however, she’s sure that she can make it.

Series Finale:
Episode #13 — “Emily and… the Leap”
Emily’s decision about starting a relationship with Micah becomes even more complicated when Will hears about it and begins to feel jealous. Emily and Tyra treat an unruly woman, but after learning of her home hoarding situation, Emily wonders if the woman’s personality changes may be caused by her many cats. Now that Cassandra and Will have broken up, Cassandra’s strictly professional behavior distracts Will and causes him to misdiagnose their patient. Meanwhile, Micah’s sister comes to town after finding out the truth about their mother.
First aired: February 5, 2013

What do you think? Do you like the Emily Owens, MD TV series? Do you think that it should have been cancelled or renewed for another season?

I was not only so into this show, but very impressed by it as well. We need more shows like Emily Owens MD and then they cancel it JUST as it’s getting to the good meat of the story!? AWFUL! Please bring it back! This show deserves another chance, especially after they put it on Netflix and so many people, like myself, discovered the show for the first time. I feel like it was probably not doing so well just because people didn’t know about it soon enough, but now it seems like they do!

Why did they cancel this show? It was done so well. They always seem to cancel decent shows in favor of violent, sexual, occult shows. What is the matter with producers? They really need to bring this show back.

I know it’s a bit late in the day but just decide to search for the new series in case I had missed it; gutted there is no more. Loved this series and really looked forward to it; bring it back!!!!!

Emily Owens MD should have been renewed. Excellent series.

This show was so great. Viewers really didn’t know what they were missing. The thing that killed this show was the lack of / poor quality advertisement and the placement. I am so sad such a high quality and intelligently written show didn’t make it more than one season.

I started watching Emily Owens on Netflix. I am soooo disappointed there are only 13 episodes. Why would anyone decide to cancel such a wonderful program. Maybe Netflix can continue the show. I don’t want to continue watching the few episodes (but of course I will) because I will get attached to the characters only to have the story stop in the middle without a conclusion! Please try to revive the series. Anyone, please continue the show. As the saying goes the show must go on!

I loved this show and it bites that they ended it the way they did.I realy wishthey would have at least showed us wether Will showing up to make out was a dream or real. Ikept thinking they would turn it into a dream sequenceand then throw us all up in arms when Micah shows up instead. Loved this show plz bring it aback.

Really enjoying this show. Love Emily’s morals and the way she talks to her patients. Would love to watch more seasons.

PLEASE TRY TO BRING IT BACK!!!!!!! I love this show and it left me hanging!

Love the show, but never saw it until it was on Netflix. I have fallen in love with almost all the shows from CW and would love to see it come back.

I love the show. It broke my heart when I found out that it was cancelled. Pls. bring it back

Whhhhhyy was it cancelled I really fell In love with it!!!!