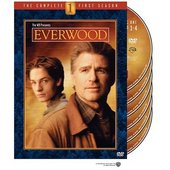 As I wrote here, the hope of saving the well-respected series largely depended on the performance of the series finale (a two-hour episode called “Foreverwood”). Another WB series, 7th Heaven, had been cancelled previously but, because so many people (over seven million households) tuned in for the series finale, execs changed their mind and renewed the series for another season on the new CW network. Could the same thing happen for Everwood?

Well, over four million households reportedly watched the series finale of Everwood. Though this is a very good number for the series, it isn’t an impressive number in relation to other shows. As a result, the CW hasn’t issued any new information regarding the series. It seems that Everwood remains cancelled.

Adding insult to injury, Warner Bros. has announced that seasons two, three and four of Everwood will not be released on DVD in the foreseeable future. The sales for season one were disappointing so they don’t want to take a chance on releasing future seasons.

What can you do? Two things. First, keep writing to Warner Bros. and the CW and tell them that you would like to see the show renewed for a fifth season and new DVDs. Secondly, consider buying the Everwood season one DVD set. It’s well under $20 at Amazon and, as of this writing, the series is one of Amazon’s top-selling DVD sets. If this trend continues, execs may be convinced to produce new Everwood stories (a tv-movie perhaps?) and DVD sets.

I looked forward to watching Everwood every weeknight at 6PM on ABC Family. Unfortunately, Dish Network doesn’t have CW. I was and still am very upset, to find out that Feb. 6th was the last episode that will be aired? Please, please bring it back. It is such a good story, with alot of great people playing alot of great characters. There isn’t anything else to watch at 6PM weeknights. Looking at all the other posted comments, I am one of many, many viewers who feel this way.

I can’t believe you are taking Everwood off the air. I looked so forward to my evenings starting out with Everwood and would tape it if I had to go out.
Was the last episode on February 5th.? Was that it????

Everwood is the best maybe slow to catch on! Like other shows but when it grabs you it grabs you. My husband & I have been rushing home & taping when we can’t be home just so we can see it. Now the finale we saw last night & it not coming on any more. Now I love 7th heaven ( the new ones) but the reruns have been run in the ground. So please return Everwood reruns at least but must of all bring the whole cast back for another season or so. 4 seasons was to short. Thanks,… Read more »

I started watching Everwood on the Family channel several months ago and we didnt have the CW, We have seen several shows and got hooked and last night was the last on family channel. It upset me, I really didnt know it existed until I saw it on Satilite but I have the CW now and if they brought it back my in-laws and I would all watch it. I hate it was cancelled and hope they bring it back I love that show. And honestly its the first soap opera like show I have ever had my husband watch… Read more »

I still to this day am very disappointed that the CW network did not pick up Everwood. Actually you know what it doesn’t surprise me, If it doesn’t have to do with some kind of sex scandles or cheating they won’t put it on t.v. these days anymore.

This was a show that had good values and alot of people could relate to it in their own personal lives.

It is ashamed to see such a good program go off the air.

I hope it will make it’s way back to the air someday.

Everwood is the Best! I can’t believe it has been cancelled. I just started watching it on the Family channnel…I won’t miss a night. It deals with real family issues, teenage issues, relationships, death, going on, parenting and the true resistance from the teenagers, teenage pregnancy, friendships,mistakes parents make and admitting it, their imperfections,etc…I told all my friends to get the dvd of the series. It truly is a show that families can watch together. Why? Please bring it back.
Disappointed viewer

I was very sorry to hear that Everwood was cancelled. My daughter and I watched the show together when the series started, and we both continued to watch the program after she went away to college—often calling each other to discuss the latest program.

I loved all of the characters—the small town charm and the romance.

Please bring the series back at least for another season, so we can find out who Ephram and his dad end up with…….

Good move CW, cancel Everwood for the absolute worst season of 7th Heaven ever produced. It is the most GOD awful thing on television. Maybe they need to bring back Ashlee Simpson. At they very least they need help from above – from none other than Aaron Spelling, since every show is in his memory.

Warner Brothers, listen here – you put so much crap out on DVD, do the right thing and release all the seasons of Everwood on DVD. Everyone will like you then.

I think everwood should be brought back for another season. I love Rose and think she is great in her role, Amdy, I good, Efferam is great with Amy, but they need to get their act together. Either they stay together and get married or they break up for good, it becomes boring after a while when they go back and forth, and Efferam need to decide what he wants to do with his life. Dalia is good in her role, and Roses’ husband I can’t think of his name my mind is a blank, is some what of a… Read more »

Everwood is my favorite show.I can’t believe that such an amaizing show that deals with real teen and family issues can just be cancelled as if the show ment nothing.This show has shown issues that every day people really deal with.No other show does this.I’ve been on every web site know to try and make a difference so that generations to come can enjoy this great show as well.This show has made teens feel like their not the only ones who are having problems.To bring 7th heaven back come on.I did like that show and it’s has had a wonderful… Read more »

I was soo sad when i found out that Everwood would no longer be on the CW…i watched the season finale and i thought they left the ending open…i mean it was a good ending, but I just wish they wouldnt have canceled it. Someone needs to reconsider opening a 6th season of Everwood because it didnt show college life for Amy and Hannah. And i want to see if Amy’s mom ends up supporting that baby…they left alot of parts unfinished and i hope they can open another season!! I will be soo happy and i bet other people… Read more »

4 million people set there on there couch and beds, and seen the LAST AND Finale Of EVERWOOD, and you still say that was not enough people? What you want 32 million people? Come on 4 million people want everwood back on. Why make us wait?

Please bring everwood back!! It is the only show on television that had real story lines. Stories that everyone in the family can enjoy and learn from. Take the crap fiction off there and let’s see a real show like everwood!@!!!!!