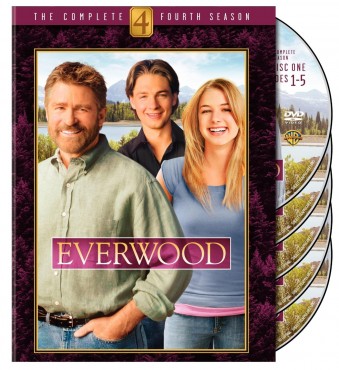 A beloved drama that ran on The WB, Everwood revolves around Doctor Andrew Brown (Treat Williams) and his children (Vivien Cardone and Gregory Smith) who move to the small town of Everwood, a Colorado community that held special meaning to their wife/mother.

The show ran for four seasons, from 2002 until 2006. It was almost renewed for a fifth season but didn’t end up making the transition to the new CW network. The show’s fate was up in the air when the last episode, “Foreverwood,” was being made so the cast and crew filmed two possible endings. The one that aired gave some closure while the other finished with a cliffhanger.

Both endings are included on the Everwood season four DVD set

that also includes 30 minutes of other unaired scenes. You can purchase the five-disc set for $27.99 or you can try to win a copy here. To enter, you need to merely post a comment below. You can enter once per day.

UPDATE: Congratulations to Karen Willow who won this DVD set in our contest. Thanks to everyone who played and we’ve got more contests coming!

Great show watched it on the WB.

I loved this show and couldn’t believe it when it got cancelled! I would love to win this DVD set! Thanks to TV Series Finale for this drawing!

I’ve never seen any of this show,but I’ve seen it advertised for a long time.I know that it has Gregory Smith from Rookie Blue in it.I wanna win so I can start getting this series for my collection & to start watching it too!!!

I am so happy to see that they have finally release the now defunct former WB network former Monday night family oriented hit show Everwood season 4 which is the finale season of the series. I have all 3seasons and I just need this season here to complete the set. The writers and producers did such a wonderful job at writimg to the point that it was able to related to all ages. Everwood was a show that was cancelled way beyond it’s time. Tell this very day Everwood is still miss by thounds of people which tell this day… Read more »