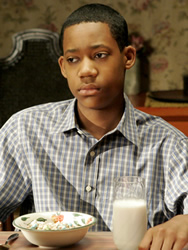 Last night, the CW aired episode 88 of Everybody Hates Chris, titled “Everybody Hates the G.E.D.” It’s the end of the school year for our young hero and he’s late (by mere seconds) for the 29th time. Though he’s already finished his tests and it’s the last week of school, he’s told that if he’s tardy one more time, he’ll have to repeat the 10th grade.

Meanwhile, Drew decides he wants to audition for Amateur Night at the Apollo, despite not having any particular talent. A full house at the barber shop tells him about their own personal experiences performing crazy acts and getting booed off the stage.

As you might guess, Chris ends up being late for school for the 30th time, even though it’s hardly his fault. He’s told he has to repeat the school year and his Mom agrees with the school because, in the long run, she feels it’s the best thing for his character development. Chris refuses to repeat the year so he decides to drop out of school. His parents are not happy. So that he’ll be able to get a job, Chris decides to take the G.E.D. test so he can have the equivalent of a high school diploma.

By the end of the episode, Drew has performed a pail drumming act and, thanks to some assistance from a hot dancer, it goes over very well. Tonya graduates and Chris has taken his exam.

He waits for the results at the local diner and one by one, his Mom and siblings arrives. Chris plays “Living on a Prayer” on the booth’s jukebox and his family sings along with him. His father, who has some trouble parking the newspaper truck, has the results of his test. Just as Chris is about to discover his fate, the screen goes to black.

With appearances by many of the show’s recurring characters, Chris dropping out of school and the not-so-subtle homage to the finale of The Sopranos, Chris Rock intends this to be the series finale. The show is very likely to be cancelled due to a variety of reasons and the comedian decided to make it an easy decision for the network.

Crews says, “Chris Rock didn’t graduate high school and started comedy when he was, like, 17 years old. Our Chris (Williams) is now a sophomore in high school, so the timing is lining up pretty well. Once he becomes a comedian, the show’s over.”

Williams is currently pursuing a film course at New York University and is happy with the episode. He told TV Guide, “If it ends here, we ended it the right way.” Rock agrees and said, “It might not be a bad way to go.”

The network will ultimately decide if last night’s episode is the last but, if it is, do you think it’s a good series finale? Are you okay that it ended in a cliffhanger? If not, how would you have finish the show?

Would love some type of alternative ending please!

EHC would have made a great sesn 5,im misspelling on prps. but i digress.i wish they didnt cancel. 🙁

By far my favorite tv show to ever come on tv

they need to put it on netflix

ok im sad the show ended but if it kept going it would be him trying to make his way in the world and i just know it would suck. no offense but thats a hard transition. im satisfied with the ending but not that so much was unfinished. like i wanna know who the guy that had the shades on was, why was he watching. why did it closeup on the number 735 on julius’s truck? was that his score? if it was even by todays standards he gets an A. if so that would be a big ****… Read more »

It’s a great show and I never get tired of watching but I season 5 would be a good idea, the show had a worth ending.

The show was cool, I love chris, drew, Tasha, Tonya, Julius, Rochelle. It ended ok but not too well.

The ending as great if you understood it in a way. I figured out why they probably did end it like that and what happened. Chris passed with 735 (Julius truck #) but he became a comedian. Why they ended it in that way was probably a teaser to “The Sopranos”. What happens to the other charcters, we , the fans, will have to look at episodes mainly featuring that person and just guess it. But lets just say that kellmoose, the bum, ends up winning the lottery or Risky gets arrested, something like that. Just let your imagination thing… Read more »

PLEASE GET THE SHOW BACK, LISTEND WHAT THE PEOPLE WANT

The following year…chris’ actual father died from a peptic ulcer disease. Probably the series was supposed to end before Julius’ death

Even if the show continued, he wouldn’t die because Chris Rock was actually an adult by 1988, he was a teenager in the 70’s rather than the 80’s like the show.

what the hell this show was so ***** good i was pissed off whenthe endig was horrible i hope it comes bak on.

Its a pity that the show didn’t have a better ending. Because I think it was one of the best sitcoms of its time. It was extremely funny and entertaining. Two thumbs up.

that show was soo good that i still watch it, they need to put the show back on !!! i neeed to know what happens ! Tichina Arnold is a GREATTTTTTTTT actor, i love her so much that i watch martin , n i want that show to come back on to . but plzz put that show on!! I LOVEEEEEE TICHINAAAAAAAA