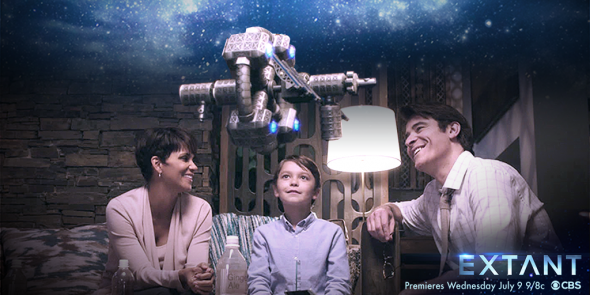 Since the season finale has been moved up to Sep 17th, I wonder how they will catch up the remaining eps…double airings?

I really like this show. Good acting. Interesting plot. So much TV out there with much less to offer. I would hate to see it end after just one episode. Think about it… What would you rather watch? Another cop series?

can’t act on the big screen or small screen:(

This is the worst sci-fi ever. ****** to slow plot, acting is ok but it has more drama then anything else. saying it’s a sci-fi doesn’t make it one. what a future, Wow they have got a robotkid and go in to space, and cars with wheels, that don’t drive themselfs, and they have eggs that stand upright on their own. oh and you still have to take out the trash wich looks more cumbersum then it is today, they blackouts come on, it looks like the creators don’t have any immagination when it comes to the future, why the… Read more »

This is always the same… This is a really good show (I don’t think I have to argue more, after the good comment before me). Do you know the only problem about it? It’s “too complicated” for the brain of our american people. Why? Because they spent their time looking at stupid show, like soap. So, if this is an INTELLIGENT (yes yes this word exist, I swear) show on television once… they’re complitely lost, and good bye for the others episodes, even if others people like it in others country. LOOK: american control the world, even if, sometimes, an… Read more »

Like it a lot so far. Berry is always good (despite the commenter who said otherwise). The plot is just different enough to keep me guessing and keep me watching. As for the guy who gave it 10 minutes and panned it i say. You must not watch much sci-fi cuz if you did you would know it takes some time to develop. I remember watching the first couple of episodes of Star Trek: TNG and thought it sucked…that soon changed.

Jo what are you on about the first eps of TNG sucked maybe the acting did, anyways totally diiferent type of series. TNG standalone eps, this is continous storyline, take BSG now that got me in the first 5 min. continous storyline and enough drama that’s real sci-fi’s. no this is going the way of Stargate Universe or Defying Gravity though that show did have some pull before the 4 ep. but the plots to slow and by that time it was to late. if a show wishes to make it it has to get you in the first ep… Read more »

This show rocks! It has a nice slow sizzle. Caught the last episode on netflixs last night as someone came to the door during the show Wed and missed half of it (good move putting it there for all us fans!) Loved the plot explaination they gave her! Then we blinked as we were hanging on the end of our seats and it was over!! Can’t wait till Wed!!

Berry is an excellent lead for this show. The plot is becoming enticingly interesting and definitely has my interest. I hope the producers let us go on this journey for a couple of seasons at least.

Really enjoying this series…keep it going!!!

Ten minutes was what I gave this show. That was all I needed to pan this convoluted, extra-fancy Spielberg creation. Unless they can find a demographic who can be entertained by Berry’s Deer-in-the-Headlights staring contest, it’s gone.

looks good but i will reserve my judgement till i watch a few episodes. Berry can be amazing or bloody awful so lets see how many episodes it lasts