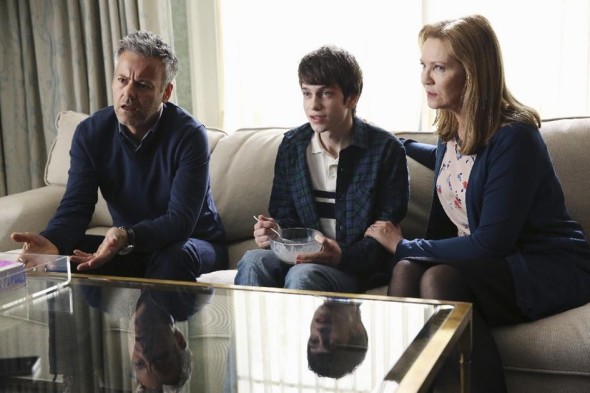 In the fall, ABC launched a new drama called Blood & Oil. They had high hopes for the series but it didn’t do well in the ratings and was cancelled. Now, the network is trying a suspenseful TV show called The Family. How’s it doing? Cancel or keep it?

The Family TV show revolves around the return of a politician’s young son who’s been presumed dead since he disappeared over 10 years ago. As the mysterious teen is welcomed back into his family, suspicions begin to emerge. Is Adam Warren really who he says he is? The series stars Joan Allen, Alison Pill, Margot Bingham, Zach Gilford, Liam James, Floriana Lima, Madeleine Arthur, Rarmian Newton, Rupert Graves, Floriana Lima, and Andrew McCarthy.

The series premiered on Thursday, March 3rd, and was given a plum timeslot between popular dramas Grey’s Anatomy and How to Get Away with Murder. The debut garnered a 1.48 rating in the 18-49 demographic with 5.70 million viewers. That was a bit lower than what Scandal had garnered in the same timeslot a week earlier.

A few nights later, The Family moved to its regular Sunday night timeslot and the results were not pretty. Episode two dropped by 43% in the demo and by 30% in viewership. The numbers have gotten worse as the weeks have progressed. The March 27th installment hit a new series low with a 0.63 rating in the demo and 2.61 million.

Unless these numbers miraculously turn around, it seems certain that The Family won’t be getting a second season. ABC hasn’t indicated that it’s a “one season series” and recently announced that the “season finale” of The Family will air on May 15th. Hopefully the writers will give viewers some closure by the end of the 12th (and likely last) episode.

But, what do you think? Do you like The Family TV show? Is it a better show than the ratings seem to indicate? Cancel or keep it?

Renew the show!!! It’s one of the best shows I have seen. Finding out adam is still alive, I can’t wait to see what happens.

Loved this show. It kept you glued to the TV with every scene. Hope it is renewed; would hate to see it not be. Now that Adam is alive, the show will get even more interesting.

Please keep this show, I love it and now that we know Adam is alive, it can only get better.

A real shame this series is not coming back. First blood and oil now the family. Best two shows you’ve had. Very disappointed.

Loved it! Disappointed to hear there will not be a second season. Was hoping there was. Great series. I don’t usually watch anything on ABC.

Better than the ratings are

This is one of the best shows on TV! Please cancel the shows that have run their course – like survivor or criminal minds. This is a fresh new show that might take a little time to catch on – but it is well worth it!!

Great show – please do not cancel this!!! RENEW!!!

Great show, I really enjoyed watching it and looking forward to see it again on TV.

PLEASE RENEW…..This is a fascinating series and seriously HOPE to see it continue……

Either bring it back or let Netflix pick it up. Very well done drama. Needs to gain support