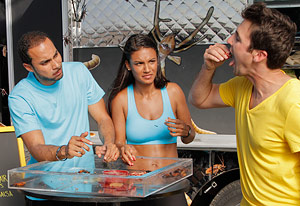 As you may have noticed, NBC aired another Fear Factor repeat last night. It replaced an original episode, titled “Hee Haw! Hee Haw!,” which had actually been originally scheduled for January 23rd but was moved because of the GOP debate. NBC later decided to pull it altogether because one of the stunts — involving a team having to ingest donkey semen and urine — was just too much, even for the peacock network.

NBC entertainment chairman Bob Greenblatt made a statement regarding the schedule change, saying, “I reviewed the episode late last week and decided it was a segment we should not air.” Last night’s episode was the last episode on the schedule until Sunday, February 12th. NBC ordered 10 episodes and has five original installments left.

The fact that NBC has pulled the episode comes as no surprise to host Joe Rogan. He discussed the donkey stunt last month with EW, saying,”It’s so over the top and ridiculous. When they told me, I really thought they were joking at first. I don’t know where the debate is, but NBC is not sure if they’re going to air it.”

Deadline speculates that Fear Factor could be cancelled after the donkey stunt, also citing that Greenblatt wants to rebuild NBC with upscale programming.

Though Greenblatt may not be crazy about the disgusting Fear Factor stunts, it’s highly unlikely that he’s going to turn his nose up at the show’s ratings. Fear Factor is currently the highest-rated non-scripted series on the network, averaging a 2.8 in the demo and 7.02 million viewers.

It’s the second-highest rated show of the season on the network overall, easily beating supposed hits like Up All Night, Whitney, and Law & Order: SVU.

Love it or hate it, NBC has little choice but to stick with Fear Factor — at least for now.

What do you think? Should Fear Factor be cancelled after this stunt or is it just “par for the course?”

Bring back Fear Factor on Monday nights for good!!!!!

March 12th , 2012. Still no new episodes of Fear Factor. Even a Twinkie will go bad if you keep it on the shelf long enough. I like the networks 1920’s attitude. Can someone tell them it’s 2012 !!! You send a product to the penalty box for 24 hours. Acknowledge the mistake. Release a statement then move on. It’s been too long , I’m moving on – F’ Fear Factor. Did anyone catch Celebrity Apprentice. How uncomfortable was it watching Donald Trump try to “FORCE” Michael Andretti into promoting a “Buick”. Luckily , Adam Carolla was there to step… Read more »

It should not be canceled.If someone does not like it then don’t watch it.This show is the bomb.We don’t hear complaints when you got naked woman plastered all over every freaking channel doing god knows what so why complain about this?The people involved can opt out of the game at anytime so its not like they are being forced to do something they don’t want to do and I am sure if any of you needed money badly you would do just about anything as well.This show is be be gross not healthy LOL.We want fear factor back!!!

I thought that fear factor pushes people to the limits on just how far and how crazy they could get to get the money at the end. Believe it or not, it had been the first time in years that I was watching NBC. My family and I would all watch it together, we looked forward to see what crazy things that they would do next. As far as reality tv goes, it wasnt sexual, it was something that I new I wasnt gonna have to change the channel because Im worried about seual scenes that could be coming up.

Cancelled – beyond acceptable. The program is also beyond dangerous & sickening. Should never have been on TV to begin with.

Fear factor has one thing to fear…putting Casey Anthony on their show! Time to get some QUALITY programming!

I say cancel..any show that would consider paying a baby killer needs to go off the air…

Cancel the show., that way we know that Casey can’t be on it.

Sheesh, Donkey ***** and urine?… What a low & nasty thing to have on Fear Factor. But, the absolute worst of the worst-lower than this- would be to have Casey Anthony on your program. Cancel Fear Factor-ASAP. ….

I dont want to see it cancelled… but if they start doing crap like drinking donkey urine, the TV will get turned off. They have to realize that there will be many people who will only tolerate so much. From what Ive seen so far…the writers have become mentally ill. Ratings are not worth making people do satanistic rituals in front of 7 million people.

I don’t think it should be canceled! I love the show! Maybe the donkey stunt was a lil too much for thd network, but change it up! Don’t cancel!……Besides…I love Jo Rogan do for a new job!?! (he’s such a hunk) lol

my husband would like fear factor back . we watched the first new episode got popcorn ready to watch the next episode and it wasn’t on. we were disappointed. will it really be back sunday feb. 12?????

claire » Yes, with a two hour episode. Not sure after that.

It’s so funny what a bunch of frauds we are here at NBC. We approved of a stunt then got cold feet and wimped out on airing a show that had already been filmed. You see, we want ratings and to give viewers what they want, but we just dont have the balls like Comedy Central has with Tosh.0 or MTv with Jackass to go through with it. We really thought that guys would love the show “Whitney” but for some reason it hasn’t happened. Call me Mr. Pig Vomit because I won’t give people the option of watching Fear… Read more »

I was never a fan of the first one, except when they had celebrity editions. So when it came back, I could have cared less, and still don’t. For those who like the show, I am fine if it stays on the air, but it never is watched in our house, donkey stunt or not.

I love Fear Factor!! It’s the ONLY reality TV I ever watch. Cancel it or keep it makes no difference to me, but I will keep watching it as long as they keep airing it. We laugh, we get disgusted and we are always have a good time watching it. Love it when that petite little girl puts mind over matter and goes for it and then the big, macho, arrogant, condescending dude turns into a sniveling little b!tch. Hillarious!! Not sure as to the reality of the stuff though. I do recall them having to 100 year old eggs… Read more »