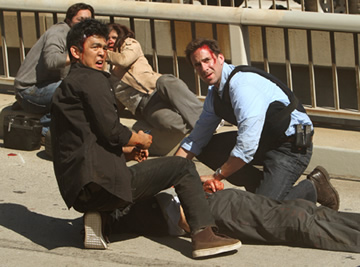 I don’t understand ABC. They cancel all the good shows but then want to put out shows like Happy Town and the Gates? Come on, it’s been done already. Flash forward was actually original and if they wouldnt have pulled the damn thing for 3 months, maybe people would have kept up with the series. I do understand that they may not have been able to pull a season two out of it, but they could have spun it to an “end of the world” type show since that guys said the world ends in 2016…I don’t know. But V?… Read more »

I am very upset 2 of my favorite shows are to be cancelled before they run a second season… I actually find it very depressing that you just start to love a new series and it doesnt continue. Why get into it in the first season when many are doomed to be cancelled. I love flash forward, i thought the acting was great and it was very entertaining.

Falshforward is my favorite show. The good shows always get canceled, while crap like Grey’s Anatomy still runs through the same five plot points for yet another season. GRRR…

ABC tends to cancel their shows WAY too quickly!! But the Bachelor remains??? It’s obvious where ABC’s head is at…The other 2 networks seem to stand behind their programs more CW is getting more interesting to watch…I think I know where I’m heading…Poor Alyssa Milano – I wished another network had picked her up!! The show is not the greatest, but probably would have had better support!!! The Nanny lasted 6 great years!!! On ABC it would not have lasted that long…The mouse has too much to say!!

at least flashforward gave us somthing to talk about- to think to look forward too- we couldnt wait for the show to be on…. i enjoyed the charactors and all the different thoughts..

i am sick to think that all thats left is bogus tv…not worth my time..

figure it out abc— not everyone wants more crap tv….

I am disgusted to hear Flash Forward is being cancelled……….i LOVED this show, and this truly makes me angry!! I have had it with getting hooked on shows, only to have stupid network “big wigs” pull the plug instead of trying harder to gain viewers. I guess its much easier to give up, than work at keeping a show on the air. I am DONE watching new program shows…………i will just wait until shows come out on dvd, and have a few seasons to watch. The list is soooooooooo long of cancelled shows that were given up on….Fastlane, Tru Calling,… Read more »

I am so disappointed in ABC canceling FlashForward. I look forward to each week to watching this entertaining and captivating show. They renewed V, which is a silly revised version of the original series. The originial series was a classic and if they wanted to have brought it back…they should have continued it from where it left off and had some of the characters return. But no, they had to redo the whole thing. If it wasn’t for the shows, Castle, Brothers and Sisters, and Dancing with the Stars, I would not be even watching ABC. They dropped the ball… Read more »

FLashforward is one of my favorite shows. I am so diappointed to know that there will be no season two.

why did they cancel such a great show? Abc – I’m not watching any show of yours anymore! first – they pull the plug n the night of the oscars for cablevison, now this!
Shame on you abc! and stupid shows like the bachlor conntinue???

FlashForward def deserved another chance. It’s a great show. But yeah let’s cancel it and make room for more stupid reality shows. or mindless sitcoms.
Now I have no reason to watch ABC. They canceled FF and Better Off Ted. I don’t care how awesome a show looks, if it’s on ABC, I won’t be watching. I’m tired of getting interested in shows and *bam* canceled.

I’m not surprised. Although I enjoy watching the show, after learning that the season finale is supposedly going to take place on the day of the flashforward, I have been wondering for some time now where they were going to go with the show from there. They have hinted about possibly a second blackout, but to repeat the “cycle” of what has been the plot line for the entire first season would not be very interesting to watch at all and would surely drive viewers away. Unless they have something very interesting in store for a second season, the show… Read more »

Flash Forward did not deserve to be canceled. Perhaps if ABC did not yank it from the schedule for 3 months, the rating would hav been better.

We all loved tis series in my family!

Flashforward is a great show. They really shouldn’t have canceled it.

flash forward is the ONE television show that both my wife and i look forward to the whole week long. other weekly shows include new house episodes, deadliest catch and although we do watch “24”- we only watch it because of our daughter, we even spoke about the series leading into season 2 and our disapointment of having to wait until fall for the series to begin again. please give flash forward a second chance. even if its time slot would change, we would and make changes. thank you for your time. please feel free to respond to my email… Read more »

FlashForward was a gripping show, worthy of much more viewers than it actually got. I don’t think it should have been cancelled, but then again, I don’t see how they could have gotten a season 2 out of it anyway….I mean, it doesn’t seem logical to begin with. Oh well, V sucks by the way, why does crap like that get picked back up for another season, yet these quality shows get canned.

At least Justified on FX is awesome….for now