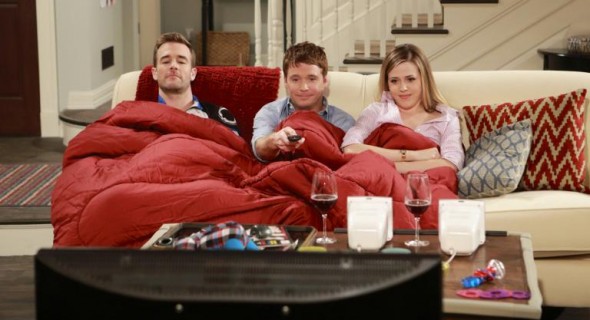 Friends with Better Lives revolves around six young people who are at various stages of their lives — married, divorced, newly engaged, and single. Each wonders if the others have it better. The cast includes Majandra Delfino, Kevin Connolly, Brooklyn Decker, Rick Donald, Zoe Lister-Jones, and James Van Der Beek.

The sitcom premiered to positive numbers (following the series finale of How I Met Your Mother) but the ratings have fallen quite a bit in subsequent weeks.

The numbers were too low for CBS but 20th Century Fox Television, the studio that produces the show, has decided to try shopping the series elsewhere.

CBS will presumably air the rest of the original 13 episodes so it seems like this would be a very tough sell. Still, you never know. If the studio is motivated enough to make a deal, we may see a second season of Friends with Better Lives yet.

What do you think? Would you like to see a second season of Friends with Better Lives? Would you follow the series to cable or some other outlet?

its one the best new sitcom comedy’s ever, you got to have this one back asap; if I were the owner of a tv network I will put all my money on this one; great great show!!

Is there a chance for collecting enough signatures or voices and send it to some important people for asking to bring the show back? Because in germany it would take the missing spot of himym and after airing the 2nd season it would be the most watched show in germany, i know it!

i love this show. Please bring it back for SEASON 2.

i love this show to death, my wife does also, the problema is not the show, its the bad decisión making at CBS, bring it back, the producers have a gem with this show.

I really like this show and you must bring it back

Watched FWBL on tv in 2014 and just watched all episodes again on you tube. Very funny show, better than anything on tv right now. It could have been the next How I Met/Mother if it was promoted properly. Network screwed that one up. Hardly anyone I talk toever heard about it. Would live to see it back in tv

Would love to see this sitcom air again. Funny as can be and love the stars chosen for their roles.

Yes I loved it. A really funny series with great characters

Friends with better lives is a hilarious series and really should be continued. I feel that it did not do as well as it could have because it was not advertised well enough.

Thats the only sitcom i watched that was nearly as good as FRIENDS.Bring it back.

I think it’s a great show!!!! They have to film more seasons

Watched Season 1 on YouTube & loved every single episode. Please bring this show back!!!

Really gutted as I really enjoyed the first season so the better bring on season 2.