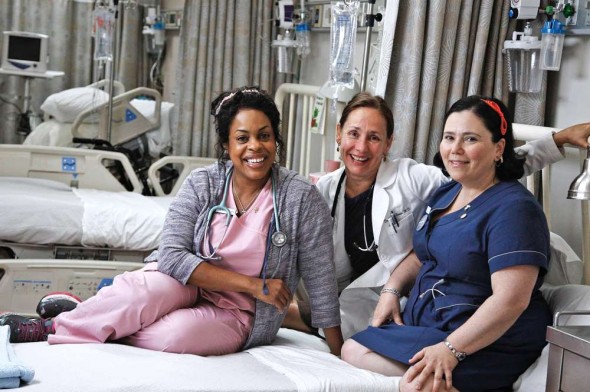 HBO has announced that the second season of Getting On, their hospital comedy, will kick off sometime in November. There are just six episodes.

GETTING ON, AN OFFBEAT, COMEDIC LOOK AT THE DYSFUNCTIONAL STAFF OF A BELEAGUERED HOSPITAL, RETURNS FOR ITS SECOND SEASON THIS NOVEMBER, EXCLUSIVELY ON HBO

From creators Mark V. Olsen and Will Scheffer (co-creators of the acclaimed HBO series “Big Love”), GETTING ON returns for its six-episode second season this November on HBO. Blending outrageous humor with unexpected moments of tenderness, the critically-acclaimed show follows the daily lives of nurses and doctors as they struggle with the darkly comic realities of caring for the elderly in an overwhelmed healthcare system, skewering the petty bureaucracies of modern medical practice in America.

Cast regulars on GETTING ON include: Laurie Metcalf (three Emmys® for “Roseanne”) as Dr. Jenna James, who once hoped to become a medical-research star, but has instead been sentenced to purgatory at the facility; Alex Borstein (“Family Guy”) as Nurse Dawn, whose personal shortcomings and obsession with finding a boyfriend undermine her need to excel in her job; Niecy Nash (“Reno 911!”) as Nurse DiDi, whose easy rapport with patients should be an example to her superiors, but isn’t; and Mel Rodriguez (“Community”) as Patsy De La Serda, a reform-minded supervising nurse of ambiguous sexuality.

Season two finds Dr. James on a research binge, measuring anal-genital distances of her geriatric population, as well as of lab rats, while promoting the ward’s hospice program to bring in extra cash. Nurse Didi wants a raise, which ultimately sweeps her up into Dr. James’ mad, mad research world. Nurse Dawn is spinning ever onward toward being the best not-so-good nurse in the history of television as she continues to try and bag co-worker Patsy. Meanwhile, Patsy has a new lean, green program to save money and make the ward more energy-efficient, which is driving everyone crazy.

I love love this show. I was a nurse for 30 yrs.The show is more real than comedy for me. The actors are terrific ! I commend the creators and HBO. The public has no idea how close to reality this show really is. I hope it continues. I know I will be watching.

What a terrific show..I am absolutely enthralled by each character..What a genius fit..As the camera focuses on each character deliver his lines,they are so expert at their craft that you totally forget they aren’t real doctors and nurses.. I am so relieved they are back.. HBO gives us a little taste of their wacky lives and then snatches us away, after 6 short episodes..I pray HBO doesn’t give us MORE Years of this superb show.. We pay alot of cable dollars for you HBO,so please keep rewarding us. Your lead actors are the best..Laurie M. Director of the Ward is… Read more »