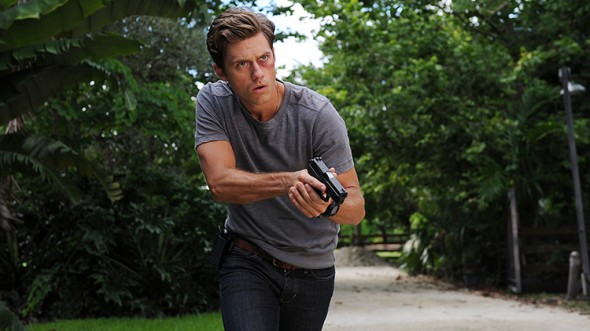 I’ve been watching this show from the beginning. It’s a great show. The writers keep the show exciting with so many twists! DO NOT CANCEL GRACELAND! Please!

My husband and I really like this show. The season started off slow so that’s probably why it lost it’s ratings. Anyhow, we are anticipating season 3…keep Mike dead and make Paige and Charlie both disappear. I can’t deal with Paige’s sporadic emotions and a pregnant Charlie just loses her edge.

Absolutely bring it back. And then spend some money PROMOTING IT. (Lack of promotion is part of why ratings are down.)

This show is far too good not to give it a third season.

I started watching this season didn’t see season 1, I think it needs to be renewed. It so much better than Rush or Satusfaction(and I love Matt Passmore) personally I think USA needs to pick The Glades and Longmire which was a very good combination.

First disappointment was that Charlie made it out alive. She doesn’t even make sense as a part of that so called team of pros. Then again I’ve never seen the first season so maybe she had a better and more sensible part. I thought this show might have some potential, but in the end it’s just another soap for night time viewing like basically all The programs on this network. Never have been a fan of soaps. I only watched the finale just to see how illogical they were going to end things. To that point they didn’t disappoint. What… Read more »

I so want Graceland back for a third season, the cliffhanger left too much open! I also want Mike to be alive – I want it so that Briggs/Mike will be secretly working undercover, of course, the house will think Mike is dead so that Briggs can’t work on (secretly) clearing Mike’s name so that he can return. I want Paige to die a slow painful death, she is off her meds or something – how could she think Mike would even kill Lina ? Yes he covered her awful death up but he was trying to save Lina –… Read more »

I meant to say so that Briggs CAN work secretly on clearing Mike’s name; Paige MUST GO THOUGH, I have no USE for that *****; and to think Mike actually loved her at one time. I want the whole cast back, but Paige I want her to suffer for what’s she’s done.. SAVE GRACELAND PLEASE!

Well, it’s a show that has gotten convoluted with all the personal drama, keep it simple. Mike in this season has gotten a Big Head, thinking he’s all that an a bag of chips. Having this show shot in Florida instead of actually in California, then using the local Puerto Ricans as Mexican Cartel members just didn’t fly. Their dialect is so different than a Mexican’s dialect, for example the Bridge. They actually shoot in Juarez and El Paso, using the locals for characters, more realistic, that show has grit and darkness that Graceland can’t provide. Graceland has gotten so… Read more »

One of the best shows on TV. Definitely not predictable. Don’t cancel it!! Or, at least send it off w a bang!!

This is an AWESOME show, please don’t cancel!!!!!! I know that some of the other USA shows have been down in the ratings this season, keep that in mind. I love all these characters and it’s definitely a better show than Rush or Satisfaction. I was hoping that Satisfaction would be better because I like Matt Passmore, but I liked him better in A&Es The Glades.

Yeah I love Matt Passmore on Glades so much better, I don’t like this show Satisfaction at all – Matt deserves a better show… damn it bring back Glades!!

This show is soooo different from the usual run of detective/cop shows…. It took me about 3 shows before I got into it but now I’m hooked. Hopefully, there will be a 3rd season…………..

Please please please renew! LOVE this show. Love everyone of the characters in it. They deserve another year, if not another 5! There are not enough good shows on in the summer time. Please dont leave us all with the only option of Bachelor in Paradise! :/

PLEASE DO NOT CANCEL THIS SHOW!! It is one of my favorites. You left too many issues hanging and we need to see more. This is a great show. One suggetion, the first season this team was really sharp. This season the writers made a little to dysfunctional to be effective. I hope that this ending makes them see the light and get back on point!

But I still really love this show and the characters. Keep for many more SEASONS.