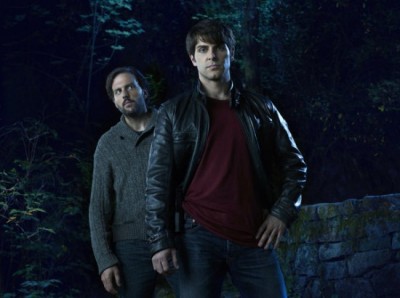 Last week, we reported that NBC had ordered two additional scripts for their new Friday night series, Grimm. It seemed that the peacock network was playing it safe, waiting to see when the ratings would level off. What a difference a week can make.

This evening, the peacock network announced that they’ve ordered a full season of the TV series. What’s more, they’re also giving Grimm a special airing in the Thursdays at 10pm timeslot. That will air on December 8th and another original installment will follow on Friday, December 9th, in the regular timeslot.

Starring David Giuntoli, Bitsie Tulloch, Silas Weir Mitchell, Sasha Roiz and Russell Hornsby, Grimm has been the only successful new drama that the network has had this season. The Playboy Club was cancelled after three episodes and Prime Suspect will sign off after all 13 episodes have aired.

Four episodes of the supernatural series have aired so far and have been averaged a 1.8 rating in the 18-49 demographic and 5.8 million total viewers (per the final national ratings). It’s the seventh highest-rated scripted series on the network this season (out of 14). It nearly doubles the demo number of lead-in Chuck.

Grimm started the season with a 2.1 in the demo and 6.56 million viewers but declined in weeks two and three. Last Friday’s installment held steady at a 1.6 in the coveted demo and it would seem that NBC believes that a sign the ratings have leveled off. Time will tell.

What do you think? Do you like Grimm? Do you think the ratings have leveled off? Will the series continue to sink or will it rise? Is Thursdays at 10pm a better timeslot?

As the viewers above, I love the show Grimm, it is refreshing charming,with good , unusual storyline please give shows a chance. I wonder how reliable these polls are. No one that I know has been polled. Please keep this show on, and in consistent spot to improve ratings even more. Moving shows can I have a negative response. To those on the cast of Grimm great job, keep up the good work. We out here in viewer land love the show

Up until Grimm came on, my favorite shows were Supernatural and Charmed. I might seem a little old (67) for this kind of show, but I’ve liked this type of show since the 60’s.

Grimm is funny, scary, intelligent, and interesting….dont cancel this program! The actors are very good in their roles. My kids love it, my husband and I love it and we are in our fifties! We look forward to every Friday night to watch the next episode.

This show is absolutely fantastic !!!! The characters and the transformations are amazing.
The 3 coin episode showing Hitler as a Grimm creature was brilliant. This show is unique and entertaining. Basing it on childhood fairy tales was brilliant. I love the new Monroe romance and it would be very interesting to see Juliette “come” into some powers of her own as Nick did when Marie died. The special effects and transformations as well as the awesome story lines and characters make this a very entertaining show ! GOOD JOB !

I love the show, its colors are great (like dick tracy movie), and Monroe is the man. Please keep up the way its going in monroe possible having a girl friend. I Want nick to be more agrressive as a Grimm should be and all are scare off. Since the first episode and his grandma, how she took care of the Reaper, well i have seen none of that from Nick (something like “chuck”). Lastly, juliet…omg, either she will turn out to be another grimm in hiding, or she just sucks. she is so squishy…omg, and turning down his marriage… Read more »

Grimm is great. We love the interaction between the main character and his sidekick.

hopefully the writters will keep Juliet around.

I love this show!!!!! It is so different than anything else you see on tv anymore.
I look forward to watching it every week!!!

I checked in to see if this show was going to be canceled or renewed, this is a great show. I enjoy watching this show as much as I once liked X-Files, the main character Grimm is very handsome and that includes his little wolf friend too. I liked Juliet in the beginning she came across as very understanding, like a Juliet showed be, hopefully she will remain that way. Keep up the good work, as long as it is on I will continue to watch it.

[…] final and 22nd episode of the current season is set to air on May 18th. NBC has ordered 22 episodes for next season right […]

LOVE LOVE LOVE this show !!!!! It spans generations. My grandson (15), daughter (40), and I (60+) can hardly wait for Friday night. We watch episodes over and over again. We slow motion the transformations, AWESOME !! Loved the ” 3 Coins “. Awe heck…we love them ALL. We wait for ” Monroe ” to show up. His character “totally ” enhances the show and makes us LOL This series has it all, suspense, drama, action, mystery, and humor.

help save this show! new time slot , new day , more promos and cast guest visits to talk shows, whatever it takes to get more viewers hooked on this creative and entertaining show !!!!!!

Grimm is the best! Each week the story is different and suspenseful. Nick is so cute and in the episode tonight quite sexy. Monroe, is the comedy relief. He is cute as well.
What’s up with the chief of police, though.. is he a bad guy or good guy. Did I miss something?

This is the only show I look forward to seeing on the old major stations!! I love the show, the characters, the moody northwest atmosphere and the storylines that are intricate, innovative and great entertainment.
I often turn of the TV when all thats available are survivor, talent and fashion shows that cater to the lowest level of intelligence and humanity.
Thank God for good acting, writing and filming for a nice change!

I love the show I like all the characters and the story’s that you are telling a great.
I hope to see much more. Thank you Winifred Roane

DO NOT CANCEL THIS SHOW!! Love it, haven’t been this excited about a supernatural show in forever. Creative , fresh, and a whole new area thinking. The morphing of characters is brilliant. Kudos to whomever thought this up. Makeup guys are great. The 3 coin Hitler episode was totally mind-blowing and rewarding.