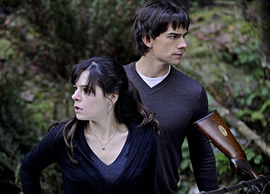 CBS’ murder mystery Harper’s Island came to a close on Saturday night after a crazy and horrific season. Will it be back for another round?

Harper’s Island tells the story of a group of family and friends who gather on an island for a wedding. One by one, the guests are murdered by a mysterious killer. The cast includes Elaine Cassidy, Christopher Gorham, Katie Cassidy, Cameron Richardson, Adam Campbell, Richard Burgi, Jim Beaver, C.J. Thomason, Victor Webster, Jay Brazeau, Dean Chekvala, Matt Barr, and Harry Hamlin.

The show debuted on Thursday, April 9th and won the timeslot in total viewership (10.49 million) but was second in the 18-49 demographic with a 2.7/8 rating/share. Unfortunately, that represented a huge loss from its CSI lead-in. Many viewers also tuned out before the first episode of Harper’s Island was over.

Viewership for the subsequent episodes dropped each week and as a result, CBS sent the show packing to Saturday nights after three weeks on the air. Not surprisingly, the ratings took a bigger dive. They hit a low of 3.2 million with a 0.8/3 rating/share.

The mystery was constructed to run its course over 13 episodes. If the show had performed well, the plan was to do another season with a different cast and mystery. The series wasn’t a ratings winner so those plans won’t move forward.

Fortunately for devoted fans of the series, CBS aired the complete mystery and we learned who was behind the killings and why. If you missed the conclusion on Saturday night, you can watch it below.

Though this is the end of the show, the upcoming DVD set will include some extras that fans will enjoy. It’ll include deleted scenes, several featurettes, and audio commentaries from the cast and crew. The Harper’s island DVD set

goes on sale September 8th, giving loyal viewers just enough time to forget enough details to be able to enjoy the mystery all over again.

Question for you… If there was going to be a second season, do you think any of the surviving characters should have been connected with the new mystery?

My husband and I watched Harper’s Island and loved it! We hope things work out for another series! The ones that didn’t watch it lost out because we were glued to the tv! Good job to the writers!

I am gonna give up watching tv altogether, every time I fall in love with a new show, they take it off…this is getting to be as bad as taking off the longest running soaps in daytime television. TV SUCKS ANYMORE!!

YES!!!!!!!!! i think they should bring them back or at less abby and jimmy and have it be on like a diffrent island or something and they fine out that there are more murders going on and they fine out that its to much like john wakefeild but they know he is dead but some one in his family or there is like a copyer thats doing a great job copying him and they have to stop it before every one dies….

hi every one
i think u guys should make a another harpers island but a different place but with the 4 people that made it through the last one and of course some more people and i think that jimmy and Abby should be married and Madison is a few years older
and of course i think it should be a mystery again
and the last one was great
so please make another one so many people wants u 2
please!!!!!!
sara

i love this show i really want you to bring it back and yes i think the 4 people left should be in it and they go back to the island and there starting to have more murders….. i think it will be really cool and it will be really cool to bring abby and jimmy back and shay and madison but if they are going to be the killers i dont wont it to be abby or jimmy but i dont think they should be i think it should be a new person that we have never seen and… Read more »

I loved the show! All of my friends loved it and we were all constantly discussing who we thought the killer or killers could be. I would love if they did another season of the show or did another version of the show. I love shows that constantly keep us guessing through out the whole thing. With all of the mindless reality TV out there, it’s refreshing to find a show that just keeps you guessing.

I absolutely LOVED this show! It is my second favorite show of all time! (second to Friends) I got so excited to watch each new episode. I told everyone I know to watch it! I can’t believe there isn’t going to be a second season. This show was so much better than all of the reality show crap that is on now! I will definitely be buying this show the day it comes out on DVD!!!!!

I have never loved a tv show as much as I loved this one. I am so glad that Abby and JImmy did not die. CJ Thomason was fabulous! I can’t wait to see more from him.

i really really liked this show! i saw every episode besides the last when i was in london. thank god for youtube!
BUT, there are not many shows with just one season and i belive that making another season of harpers island would destroy the happy ending and exaggerate when the mystery is already solved.
just hope that harpers island soon will be out on box so i can enjoy season one over and over again, and just season one.