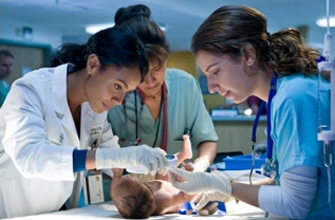 As we reported earlier, TNT has renewed the HawthoRNe TV series for a third season. The series will return sometime in 2011. The last two seasons have aired over the summer months so it’s likely year three will do the same.

TNT has written a prescription for a third season of the powerful medical drama HAWTHORNE, starring and executive-produced by Jada Pinkett Smith (Collateral, The Matrix trilogy). TNT has ordered 10 new episodes of the hit series, which is slated to return in 2011.

Created by Emmy(R) winner John Masius (St. Elsewhere, Providence, Dead Like Me), HAWTHORNE premiered in summer 2009 and ranked as one of ad-supported cable’s Top 5 new series of the year. In its second season in summer 2010, the series continued its success, averaging 3.7 million viewers and ranking as ad-supported cable’s #1 Tuesday program among women 25-54.

“With its memorable characters, powerful performances and moving storylines, HAWTHORNE takes us on a dramatic journey through the world of a hospital on the brink of collapse,” said Michael Wright, executive vice president and head of programming for TNT, TBS and Turner Classic Movies (TCM). “This series has performed extremely well among our key demos and proven itself to be a great summer series. We are very excited to continue working with Jada and HAWTHORNE’s outstanding production team and cast.”

OMG they have ruined the show. How stupid to have Christina cheat on her husband. This season they have turned her into a psycho.
How sad.

agree with bob totally ruined the show, made the chacter of Christina totally self involved and selfish. Never once did she ever condider Tom feelings about anything. Feels like this whole season was more about Jada being able to explore her acting abilities …I like Jada just dislike the chacter this season .not sure I will continue to watch

I HATE this seasons show and when Christina and Nick hooked up last night…..it was GROSS…..He is sooooo unattractive and CANNOT act……the storylines are ALL lame……

tom and christine needs a honeymoon. when is ths relationship going to catch a break? i’ll keep watching because tom needs to step up his game and make some moves on his wife.

Please get rid of Marc Anthony… He might be friends with Jada & Will in real life, but he cannot act!! My hubby doesn’t even want to watch the show since you put him in it!

This season has been confusing and very senseless in so many ways. I think the CORE of the show is being destroyed over Marc Anthony’s character. Tom & Chris make the show. Chris is the character in need of the most growth. And to start with she needs to start communicating with her husband and daughter. Not some stranger. I have almost stop watching and if it conitunes I will be out by the 6th episode. MA has not helped the ratings. The lkast episode did because it had the CORE characters Chris & Tom finally communicating. They can be… Read more »

I love this show, does anyone know when season 3 will premier, or did it already and I missed it?

Do not make character into a ****. Sleeping with Nick is wrong.

Please do not have Christina and Nick’s characters getting involved sexually. Will mess up Christina’s character. She was a single mother with a great job and have great standards. Do not make her character into a ****.

I love this show cant wait until it comes back on. It is not very often that you see a lead roll being a women. I think Jada is ecellent in this part . I like the characters also. A crack head mama can love her child also. I’ve met crack head women who love there children and the child gave them a reason to clean up their act.

I love Jada Pinkett-Smith in this movie. There is so much passion and drama. She can relate to all walks of life. She is representing as a widow, single mom, women in love, career women, a friend and the list goes on. We need more shows like this. Keep up the good work Jada. And that Willow!!! If I could afford her I would have her as enterntainment at my 8 years party!

Go Jada. Do the doggone thing girl.
I love Greys Anatonomy and the Practice, but they have nothing on HAWTHORNE. Nurses do have a say, as no one, doctor’s are always right.

A broke clock is right twice a day, so Christina Hawthorne you can come assist my doctors anyday.

HI We both Would like too know when the Series is going to start again thang you for your time . Vicki and Jim Aucutt

Ahhh THANK YOU!!! for continuing yet another season because I LOVE this show!! Can’t wait till it comes back next year!!! Yessssss!!!

I really could not stand her character or the show the first season. I find it a major fantasy that a nurse in charge yells at doctors and tells them how to treat patients… We always see this in TV shows, a Nurse is top notch, so close to being a doctor but some tragedy pulls them away and they are left 1 credit away from being a neurosurgeon or some such… Season 2 I liked more, although once again, not because of her as much as the daughter and BF storyline or the Vartan/head of surgery storyline or even… Read more »