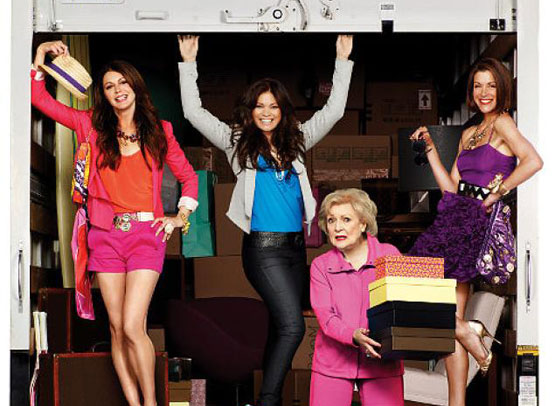 TV Land has decided to end their signature original sitcom Hot in Cleveland. The current sixth season will be the end for the comedy.

The ratings for Hot in Cleveland have come way down over the years. The first season averaged more than three million viewers each week. The fifth season drew about 950,000 viewers and the first few episodes of the current sixth season have averaged 710,000.

Of the decision, TV Land president Larry W. Jones said, “It’s been an honor to work with Valerie Bertinelli, Jane Leeves, Wendie Malick and the incomparable Betty White as well as our executive producers Suzanne Martin, Todd Milliner, Sean Hayes and the rest of our exceptional writers, production team and crew. The passion and talent they brought to the set each and every week over the past five years has put TV Land on the map as a network dedicated to quality original programming. We will continue to celebrate the show and are looking forward to a fantastic series finale.”

On the positive side, there will be 128 episodes by the end, plenty of episodes to keep Hot in Cleveland airing in syndication for years to come.

What do you think? Are you sorry that there won’t be a seventh season of Hot in Cleveland or, is it ending at a good time?

I wish it was going for just one more season. I’d like to see seven seasons. Maybe if they’d moved the stories along a little faster and indulged in some of the story arcs a little more seriously we’d still get a few more seasons. However, what the show lacked was what I loved about it. It felt like a situation comedy from the early days of TV. A stage play for television that was more aware of the fact that it was on TV. Simple stories. Low hanging fruit. But delivered with a skill that only the actresses so… Read more »

They always cancel the good shows!! I am so sad about this show ending. I always say that I am not going to get involved watching any new shows because the networks seem to cancel the ones I like.

I’m so sad to know the series will end. I really enjoyed waching the ladies, specially ms Betty White

I am very sorry to see the show cancelled. I have enjoyed every season. I will surely miss girls.

One of the funniest, best quality, best written comedies on TV will be sorely missed! TVLAND should hang in there and keep it going! It is the sole reason for the success of TVLAND. It boasts the best talent in television today both in front of and behind the screen! It is incomparable! Don’t give up on your fans!

I think it’s one of the funniest comedies on tv all my friends ages 35-55 watch it and love it. Betty white is a gas with the way she delivers her lines. We are very sad and hope you rethink this cancellation

They are the only women on TV who weren’t ‘cutesy’. And young. They are so much fun. Is it possible another network will pick them up? We mature women deserve some fun, too.

I think that the executives at Hot In Cleveland Tv, should change their minds, say that they made a mistake, and go on to season seven! Their are just too, too many disappointed fans! Please just change your mind! The ratings will soar!!

I’m so sorry to see this show end. It has been such a joy to be able to just relax and watch such an enjoyable sitcom with such talented actors and actresses. It’s a shame that the 710,000 viewers mean so little to T V Land.

We are very upset of the CANCELING OF Hot IN CLEVELAND . there ARE OTHER SHOWS ON T V THAT I WOULD NOT HAVE MISSED.

I am so disappointed to see this show end! I have laughed so hard at so many of the shows & enjoyed every episode!
Even more disappointing is to not see Betty White on the air anymore! Her comedic timing is still a 10!

I love this show. These ladies really did a great job and it was such a pleasure to see some of their prior co-stars show up and integrate themselves into HIC’s storyline too. This show was unique, so comical and sweet. Kudos to all the ladies who starred in this show. There are many comedies I like on TV anymore. I will really miss you. I don’t want to see the syndicated shows……I want all new ones .

Sorry to see this show end. Delighted to find it in syndication. Great cast. Funny storylines. Hoping that some of the cast will find there way into the King of 7B show.

I am so sad to see this series end – I have watched every show and it is funny and refreshing and Betty White is so much fun to watch. I wish that TVLand would re-think this decision.

I enjoyed HiC very much. I looked forward to their antics. Love the comedy chemistry of every lady in the cast. Sad to see it cancelled!!! Found the writing to be refreshing compared to alot if what I run across today. Thank you ladies!

I have enjoyed Betty Whites career her entire life.
Her early days on Match Game with her Husband, the Golden Girls, which would not have been funny without her and dry lines, and all the rest.
She has done some amazing things.
I will miss Betty most of all. But I will also miss the whole show & crew, as it is very funny.
I figured this was the last season, at least for Betty, as Betty probably wanted to take it easy.
They will all be missed very much. A great crew who work, very, very, well together.