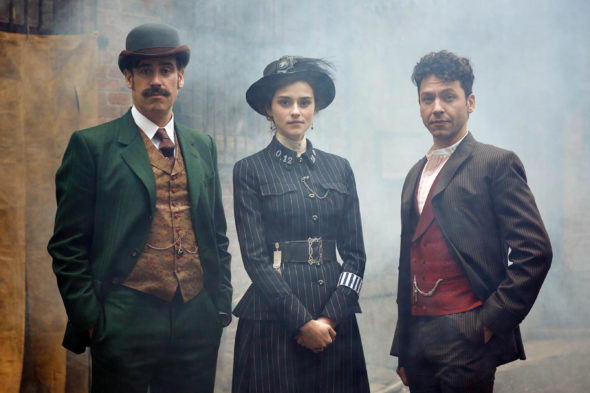 Please, not again, Fox. Yet another innovative. clever, fun, clean show with delightful characters, and you yank it off without giving it a chance.
I know these comments aren’t going to mean anything to the folks at Fox, because the show is still going to be cancelled and they will try to lure us in with another one next season….well, I’m done with Fox finally after this fiasco…Sleepy Hollow and now this……

You do this every year bring out a new show get us hooked than cancel getting to the point of really dislike ‘your channel as well of my friend you leave all the really really dumb shows n delete all interested one.

The series was entertaining and I had hoped that it would be renewed. I thought the plots were interesting and had looked forward to more episodes! Truly a loss for our television viewing!!

The whole family really enjoyed the show. We hope there is another season.

Being an Houdini historian and a fan of the Sherlock Holmes stories, I was ready to bash this show. Instead it’s kept my attention and I look forward to every episode. It deserves to come back for a second season. The acting, writing, locations, it’s very well crafted and i love it!

Great show. Keep it going. I look forward to seeing next season.

I think that it is a good show, my husband and I didn’t know about it but we sow the first season I we think it is very good. I hope it gets renewed.

keep it, It is a very good show. When will it start again?

Do not cancel. It is a good show, very different and a very intelligent mystery, which are far and few between on the networks. One of the few shows I watch.

Please don’t cancel. It is a very good show. and different than the usual.

Do not cancel. Very good show