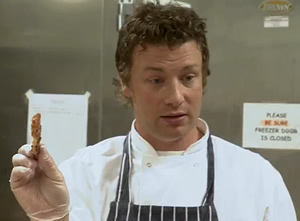 ABC recently debuted a new reality show with an unusual focus — nutrition. Will it catch on or end up in the dumpster with yesterday’s french fries?

In Jamie Oliver’s Food Revolution, chef and TV host Jamie Oliver travels to Huntington, West Virginia — otherwise known as the unhealthiest city in America. His goal is to educate the residents about nutrition and to change the community’s eating habits. In doing so, Oliver hopes to start a grass-roots revolution that will lead the whole country to eat better.

The series debuted with a special premiere on Sunday, March 21st. It attracted a 2.2 rating in the 18-49 demographic and 6.13 million total viewers. That put the debut in third place in both categories and it only retained about 60% of the Desperate Housewives lead-in audience.

ABC reran that episode on Friday night at 8pm and it attracted a 1.6 and 5.42 million. That was followed by episode two of Food Revolution, which garnered a 2.6 rating and 7.47 million viewers. That was a better performance than its Sunday night debut and put the show in second place for the timeslot. It was also a significant improvement from previous occupants like Ugly Betty and Shark Tank.

For last Friday’s third episode, the numbers tumbled to a 1.5 in the 18-49 demographic and just 4.31 million viewers. That’s a terrible drop but the whole night’s ratings were actually down. On a positive note, Food Revolution outperformed its lead-in (Wife Swap) and tied for first place in the all-important demo.

This season of Food Revolution is made up of just six episodes so ABC will certainly air all of them. The network will likely wait until all of the episodes have aired before deciding if it warrants another season. If it continues to outperform ABC’s other Friday night reality programming, a renewal is likely. Theoretically, Oliver would simply move onto another town.

But, what do you think? Is Jamie Oliver’s Food Revolution a compelling show or are you bored with it already? Should it come back for season two? Cancel or keep it?

Some misinformation out there. This is not a reality show but a documentary. It wasn’t meant to have a lot of episodes. But I do hope that ABC will continue to help Jamie Oliver with the food revolution. Something really does need to be done about the food that is served in our schools. No wonder our children are having trouble learning in school. They’re not getting the proper nutrients! Also lunch lady, the show was always supposed to air on Fridays at 9pm. They just had a sneak peak for the show on Sunday March 21st. They re-aired the… Read more »

@Stephanie: Thanks for your feedback and information.

The line has become blurred but I personally think the term ‘reality show’ is more appropriate. Are Wife Swap and Supernanny documentaries as well?

There are only six episodes to this season but ABC is treating it like a regular series, meaning that it could return for a second season.

This program not only teaches people that eating healthy can be fast and delicious and make you feel great, but it also demonstrates the potential for fun during the learning process. It demonstrates the devestating effect overweight has either to the person who is obese or their loved ones. It keeps us glued to the TV with fascinating personalities, life experiences , and basic life lessons for us all. And finally it teaches us that ONE PERSON CAN MAKE A DIFFERENCE, AND ENCOURAGES US, THROUGH HIS EXAMPLE ,TO DO OUR PART!!! Obesity is a huge impairment for so many Americans… Read more »

This is the first cooking showI have watched. Jamie’s show is so motivating for all age groups. And now I look forward to waching the entire series. Please keep this program!!!

My 10 year old watches with me and loves it. We even discuss his food choices at school during the week and when he tells me what was served, we talk about and ask “what would Jaime Oliver think was the best choice?” Sometimes he makes the right choice and sometimes not, but we discuss why the bad choice was unhealthy and how the other one would have been better. This show really is a wake-up call to everyone. The schools are serving horrible substitutions for food and I truly believe this is where children’s bad eating habits are being… Read more »

GREAT show!!! Childhood obesity is epidemic in this country and we need all the help we can get to change this. Jamie Oliver is so sincere in his desire to be one solution to the problem, and he manages to be both compassionate and entertaining while getting his information across to the people he is helping. Please keep this show and advertise it more so everyone will know this is on. Great job, Jamie!

quite interesting how people comment more on one article than the other.
:p

I am so totally moved by Jamie’s commitment to this show and his work . I think this is a really important show for America to watch. We are killing ourselves with corporately produced processed food. I really hope ABC makes the investment in this show and serves up something good for America amongst a line of a sugary, brain fattening sit coms and tantalizing dramas.

I think that this is one of the most important shows to come along in quite a while. Not only does it expose the lunch programs in schools, but I hope that parents are learning what they can do at home to feed their kids healthy and teach them about food. We are killing ourselves in this country by the food we eat. We are also letting the fast food restaurants win the war in high calorie and high fat food. Please keep this show on. I am such a fan and have encouraged my family and friends to watch… Read more »

Keep it and keep up the good work. Too many people are not teaching their children how to eat and understanding that they are killing their children and giving them a life of teasing and sickness. I enjoy watching the show and am a fitness and health nut myself. I have been through 8 back surgeries and still kept my weight under control from eating right and trying to exercise even if just walking everyday.

FINALLY – SOMEONE WHO IS SERIOUS ABOUT SOLVING CHILDHOOD OBESITY!!! THIS IS A WONDERFUL IDEA BUT I THINK YOU NEED THE PARENTS ON BOARD TO FOLLOW THROUGH WITH THE SAME PROGRAM IN THE HOME. WILL THE PARENTS BE GIVEN FOOD EDUCATION AS WELL???
THANK YOU JAMIE FOR STARTING THIS REVOLUTION. I APPLAUD YOU!!!

Someone needs to expose what our children our eating. Thank you Jamie!

This show is WONDERFUL! Jamie is doing a fantastic job raising awareness. Something has to change in our school system and with the USDA guidelines! Healthy eating starts at an early age. It’s very frustrating to see people resist him and give him such trouble when he is trying to do only good for our children in our country. I think the people most resistant are most fearful – and are in the most trouble with their health! KEEP THIS PROGRAM!!