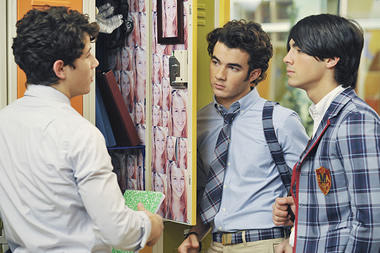 “Fish Hooks” sucks and is just another mindless show to drain any intellegence from our children’s heads. If hurting eachother and making fun of someone else is funny, I’ll take Jonas’s “aging” comedy anytime for my kids! At least they were clean cut and enjoyable to watch. That show had really great moments, I am just sorry that I didn’t realize it was coming to an end. They really should have made it more clear for viewers so there was some closure to those who enjoyed it. Hopefully “Disney” Channel will put on more of what it was made for,… Read more »

Well I cannot say they used up all their talent, as they never had any before this. I saw them in concert when they were touring with Miley Cyrus and they just don’t have what it takes to make it for an adult audience. The kids that love them grow up and they are done. For example New Kids On The Block. Also once Disney gets their hooks in you, your career is over before you have a chance to escape them. They need to take there fortune and go back to college and live a good life.

I’m glad that this got canceled. We need classic disney, not this pop tweeny disney

Finally their 15 minutes of fame is ending!

I am a grandmother, and enjoyed watching with or without my grandaughter. Sorry to see it go.

Really, I couldn’t stand this show when it came on. The JONAS brothers really can’t act, and they only got this show because Disney wanted to rake in more viewers from the obsessed tweenage girls out there. The writing sucked, the comedy was un-laughable, and I just don’t think the characters were very interesting. The premise itself is very stupid: The Jonas Brothers live as … the Jonas brothers … in an “abandoned” firehouse and they go to school with their fashion-designer friend and their obsessed number one fan. All while trying to balance fame with normal life. I smelled… Read more »

I think it stinks! My daughter and I both enjoyed watching this show. It was funny! Reminded me a lot of the Monkees. I think part of the problem of why it wasn’t watched as much was the TIME it was on. My daughter goes to bed at 8:00 on school nights and this show wasn’t on normally til 8:30/9:00! What do they expect? This stinks! We were really looking forward to the next season. It was something we could do together. We would sing along to the songs and everything! Very sad about this. There are other shows –… Read more »

Fish Hooks is hilarious! I think you may need some surgery on your funny bone – stat! Besides, if the show is on after your kid goes to bed that should be a sign that it is not appropriate for someone her age!

i think the Jonas Brothers are not very talented and only marketing from Disney. They are not cool anymore and on their way out! GP

My girls and I watched the show all the time and I have to agree that the writting was bad. The show had good moments but fizzeled in others. Plus fans know enough about the Jonas brothers in real life that it’s hard to hide some of it in the show. It seemed to be pushing it a little that Kevin was still in school and single when all the fans knew he was married. I’m sad to see it go, I’m hoping they can find some new shows with decent roll modles I wont be afraid to let my… Read more »

My kids (9 & 12) watch Disney and this is one show they did not like from the start. They had looked forward to the show when it debut but they just didn’t seem to get into it. I will admit that the second season was easier to digest than the first but that isn’t saying a whole lot!

Some people do like to watch Jonas LA or Jonas and dont like that it was cancelled from Disney channel and we hope that it would stay on disney channel.

The writing on this show sucked. Mny kids said they thought it was boring.

ran its natural course. the guys are getting married, and are above college age almost

Good riddance. Now jonas and hannah one step closer to just going away. And hopefully never coming back.

Jeremy, they’ll just be replaced with something even worse. It’s the Disney way.