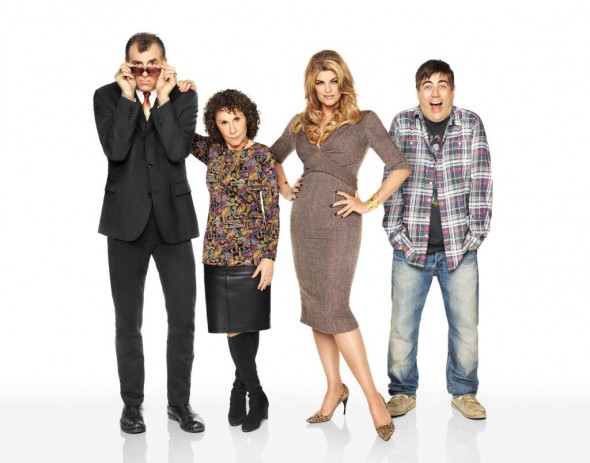 TV show description:
This sitcom follows the life of Tony-winning diva Madison Banks (Kirstie Alley). She’s enjoyed years of unbridled hedonism, drinking and sleeping her way up and down Broadway.

Her life takes a surprising turn when she meets up with Arlo Barth (Eric Petersen), the son she gave up for adoption 26 years earlier. Maddie has played countless roles on stage, but now she has to play the one part she’s not prepared to take on — a mother.

With the help and encouragement of her long-suffering assistant and best friend Thelma Katz (Rhea Pearlman) and her eccentric chauffeur Frank Baxter (Michael Richards), Maddie realizes that Arlo is a diamond in the rough and invites him to move into her swanky New York City apartment.

Series Finale:
Episode #12 — The Dinner Party
Maddie hosts a dinner party for Arlo’s new girlfriend and her snooty intellectual parents who also live in the building. Thelma pretends to be her maid and tries to feed Maddie information for her conversations. Fraks picks up Professor Danniker, Maddie’s date, but he ends up getting drunk in the limo so Frank takes his place. The evening is a disaster and Arlo proclaims that he is proud to have people in his life that would go to such lengths to help him impress a girl.
First aired: February 26, 2014.

What do you think? Do you like the Kirstie TV series? Do you think it should have been cancelled or renewed for a second season?

PLEASE keep and let it grow. Kirstie and Michael are great. Love Rhea but she and the rest of the cast need to tighten up their delivery. Even John Travolta was shaky/uncomfortable during some scenes .
Networks are too quick to cancel when it takes time to even discover a show w/so many choices.

I really don’t like the show. I don’t think even TVLand can make that cardboard box of a woman interesting. The fact that they advertised the show for 6 months, then show the same episodes every damned night just makes me wish she’d spontaneously combust. She’s too self indulgent for a has-been. Please please please spare us. I’m really losing my interest in TVLand with all these washed up actors and repeats. You can’t make us like something just because you shove it down our throats!

It’s hard to watch these recycled actors trying to be funny in a sitcom, just not funny. I feel sorry for them. They blew their money, now they are desperate to do any kind of acting. Sad, just sad, I can’t watch it…

Cancel the darn thing! Horrible recycling of oldie-moldie material. And TVLand is practically FORCE-FEEDING this crappy program to us, airing it practically every few hours. It’s a bomb….let it die a dignified death!

1/2/14 Just watched 1st episode – very good at the start, tapering off in humor as it ended, but we’ll watch episode 2. Thank you for not getting as uncomfortably dirty as seems to be the chuck lorre standard.

I have never seen a show so heavily promoted as this one – it’s like they are desperate for success. I have watched it and find the story, acting, and overall foolishness beyond annoying. Kirstie is a difficult charactor to care about – even in real life. Wish they would pull the plug on this one and devote some attention to other more promising shows. I feel for Reah and Michael – so good to see them active again – wish it was with something worth their talent.

Its a very funny show..the cast is hysterical and great..I hope it gets renewed for another season…

I think it is terrible. Tried to like it, but cannot find any real sense to it.

I think this show is great! It takes a couple episodes for chemistry to come about and they’re right there now. I didn’t like Arlo in the 1st episode, but he’s growing on me. It’s quick, fun, and relatively clean, which I love. So sick of the sexy smut out there. I forgot how much I’ve missed Michael’s physical humor!! Quirky and funny make the show likeable for me 🙂

cancelled, PLEASE. or in the alternative, take allie out, keep the co-stars in and change the name of the show.

I loved the show it was so cool!

I love Kirstie but the program was pretty bad. She deserves much better. And when she gets a better show she needs to leave Rhea and Michael behind.

CANCELLED!!!!! it is not funny, and she is getting fat again after all that hype!!