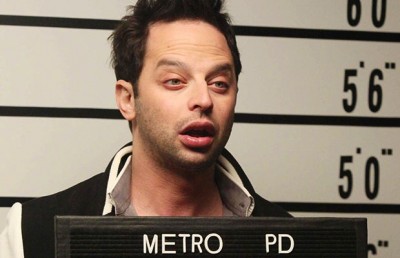 The first season of eight episodes is currently airing on Wednesdays and is expected to finish airing on March 6th.

Series Premiered to 1.2 Million Total Viewers and Was #1 Show in All of Television In Its Timeslot among Men 18-34 and Men 18-24

“Nick plays his characters with such comedic conviction, it’s become obvious he has a serious personality disorder,” said Alterman. “We hope another season will help him discover who he really is.”

“All of me are very excited,” said Kroll.

Known for his role as “Ruxin” in the FX comedy “The League,” along with his stand-up specials and roles on “Community,” “Childrens Hospital,” “Parks and Recreation” and “Portlandia,” among other credits, Nick Kroll returned to COMEDY CENTRAL as the creator/writer/star of “Kroll Show.” Not just a sketch show, the series is ultimately Kroll’s smart and absurd take on of-the-moment pop culture topics like internet life, professional sports, nightclub culture and the television landscape.

Fans of the show and of Kroll (@nickkroll) are treated to sketches featuring many of their favorite characters, including Kroll and Jenny Slate as two publicists both named Liz in the reality series “PubLIZity;” Kroll as “Bobby Bottleservice” and Jon Daly as his sidekick, “Peter Paparazzo;” “Aspen Bruckenheimer” and “Wendy” (a.k.a. the “Rich Dicks”); “Dr. Armand,” the premier canine plastic surgeon; and the incomparable “Fabrice Fabrice.” Guest stars from the first season included Fred Armisen, Andy Daly, Kathryn Hahn, Ed Helms, Rob Huebel, Andy Milonakis, John Mulaney, Chelsea Peretti and Adam Pally.

“Kroll Show” is executive produced and written by Kroll, John Levenstein (“Arrested Development”) and Jonathan Krisel (“Portlandia”), who is also directing. Jon Daly (“Happy Endings”) serves as Supervising Producer and actor in the series. Jim Sharp and Monika Zielinska are the Executives in Charge of Production for COMEDY CENTRAL.

What do you think? Are you a fan of the sketch comedy series?

I just can’t believe my eyes! …. People (real people?) are actually calling this burning dog **** fungus of a show GOOD?!?! hmmmm. Just another step leap & stumble down the hole of mediocrity & steaming the ever grimy window of our culture – the TV It’s gotta be his own batch of engineered test tube babies that go online post rosy reviews for this toilet clog of a show show that has about the same laugh factor as a sack of drowning kittens (don’t worry the kittens will be fine – in never having to endure the Kroll Show).… Read more »