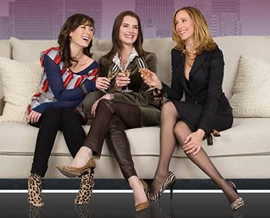 TV show description:
Based on the best-selling book by Candace Bushnell (who also wrote Sex and the City), this drama follows the lives of three high-powered friends as they weather the ups and downs of their complicated personal and professional lives.

Parador Pictures president Wendy Healy (Brooke Shields) does everything she can to balance her career with her life with unhappy, stay-at-home husband Shane (Christopher Wiehl, then Paul Blackthorne) and daughter Maddie (Sarah Hyland).

Nico Reilly (Kim Raver) is the editor-in-chief of a hot fashion magazine named Bonfire. Nico has her eye on becoming the CEO and isn’t helped any by her lifeless marriage to Charles (Christopher Cousins). Nico’s boss Hector (Julian Sands) tortures her, her co-worker Mike (David Alan Basche) tries to sabotage her professional credibility, and flirtatious hottie Kirby Atwood (Will Toale, then Robert Buckley) is determined to conquer her.

Free-spirited designer Victory Ford (Lindsay Price) longs to make her dreams come true and hopes to find “Mr. Right” along the way. He could be eccentric and wealthy Joe Bennett (Andrew McCarthy) who loves the idea of sweeping her off her feet, even if it’s usually communicated through his assistant.

Series Finale:
Episode 20 — La Vie En Pose
Nico gets into her office to start her day. She plays her messages to find one from Kirby, who has called from Aspen to wish her a Happy New Year. At Victory’s, her parents arrive in New York via private jet that Joe arranged for them. Her parents insist on staying at her house, rather than accepting Joe’s offer to stay at the Four Seasons.

Griffin greets Nico in her office to hand her a document from the legal department acknowledging a romantic relationship between them. Nico, taken aback by the document, isn’t sure how to respond, creating a bit of tension between her and Griffin.

Wendy, struggling with Maddie, looks to Shane for some advice before he leaves on tour. She is also preparing to throw Joe and Victory’s engagement party. Back at Victory’s, she is showing her parents photos from her store opening, but her parents are critical at every turn.

Sal fills Wendy in on a story that Nico is working on and suggests that Wendy look at buying the film rights. After all, he owes her one. In Nico’s office, during a staff meeting, she realizes she may have fallen off the press’ list of top invites to parties.

Joe and Victory’s parents are trying to find common ground in conversation, but instead, there are several awkward silences. Victory’s mom is sharing some of her wedding ideas, when Victory lets her know that Joe might be more into an intimate ceremony than a traditional wedding.

As Joe leaves for a meeting, he sets plans to take them to a fancy dinner and a helicopter ride, but they are resistant. Plus, Victory is concerned with Joe’s spending, considering his financial situation.

Griffin pops by Nico’s office to see if she’s finished the letter for the legal department. He also wants to know why she tipped off Wendy to a film property she knew he wanted to buy for Parador. Nico, caught off guard, is disappointed in Griffin’s approach.

Nico meets with Dahlia about her image. She is worried that due to personal reasons, she was out of the spotlight for a few months. Dahlia, a fast worker, gets her booked in the 10am hour of the Today Show for the next morning.

Victory confides in Wendy about the difficulties with her parents in town and Joe’s grand style, considering his financial restraints. Later, Joe takes Victory and her parents to a private showing of the latest exhibit at the Guggenheim Museum. After an awkward conversation about Joe and Victory having kids, they all walk in silence.

Maddie comes in past her curfew and Wendy is furious. When she tells Wendy that she was in Paul’s dorm room downtown, Wendy grounds her.

Nico makes a late-night visit to Wendy to discuss Griffin and find out who tipped her off to the possible film rights. Wendy, not shocked at Nico’s confession about getting involved with Griffin, is supportive of her friend regardless of the fact that he fired Wendy from Parador.

Kirby pays a visit to Victory’s store to show her the new ad for her linen collection. While there, Victory gets a call from Dahlia to turn on the Today Show. Kirby stands by and watches Nico’s interview.

During Nico’s Today Show interview, things veer from the Bonfire article to questions about her relationship with Kirby. During the questioning, Nico stands up for her relationship and makes an impact on Kirby, who is watching from Victory’s store. Griffin, also watching, is unsettled.

At Joe and Victory’s engagement party, Nico confronts Dahlia about her Today Show interview, but Griffin shows up and interrupts. Victory talks to her father about his toast at the party — he’s told her he won’t be doing one. Griffin approaches Wendy to thank her for the invite and she uses it as an opportunity to set the record straight on the film project.

Joe wants to help Wendy bankroll an offer to counter a studio, but Wendy lets it slip that she knows about his money troubles. In the kitchen, Victory talks to her dad about his reservations regarding Joe. She reminds him of his own parents’ reaction to his marriage to her mom, a young Korean girl at the time, and that Victory was seven before meeting her grandparents.

Wendy and Nico give speeches to the happily engaged couples. During the speech, Wendy notices Maddie walk into the party drunk and grab a glass of champagne. After the speech, she quietly walks to the back, grabs her daughter and leaves. Griffin approaches Nico and excuses himself from the party.

Wendy tries to hail a cab to get her and Maddie home. Maddie, upset, tells Wendy it’s all her fault that Shane left and isn’t coming back. That he left on tour to get away from her. Wendy tries to tell her that they aren’t splitting up, but Maddie gets sick and throws up in a trash can.

Victory and Joe decide on wedding plans. Kirby pays Nico a visit which opens up the possibility of something new. Wendy and Maddie come to a truce and find comfort in their relationship.
First aired: January 9, 2009.

Pleaseee, bring it back!!! At least for a great finale season =) The public is waiting for it!!!

Best show seen in a long time, bring it back! Its nice to see a series aimed at a slightly more mature market and not teenage, so many of us can relate to their situations

Bring this show back!! I don’t see why it got cancelled! I am dying to see what happens. I need closure!

WHY WHY WHY??? Why did you end this show? Will you bring it back? RSVP.

Please please bring back this show. We enjoy everything about this show so much and we hope we can get to see the third season here in Japan as well 🙂

Bring back the show!

Please bring this show back!! I’m dying to know what happens next! Its not too late 🙁

Please bring back Lipstick Jungle!!! It’s SO wonderful to see a show that relates to a little bit older market. It has such class, easy relatable to & most of all, the dynamics between the 3 leading ladies is genuine. They found 3 ladies that just click. Please open the archive boxes & give it LIFE again!

How to bring this show back?

I loved this movie. It is the best movie that I have ever seen. I told my friends to watch it too.

PLEASE BRING BACK THIS SHOW ME AND MY SISTER ABSOLUTELY LOVE IT !!!!! AND WE SPREDING THE WORD ABOUT IT SO MORE AND MORE PEOPLE ARE STARTING TO LIKE IT !

its sad that they have been so stupid and cancelled the show because people acually did like it and its alot better than sex and the city and am sure it can as good or even better as that!

the show really could have grown. stories and situations every woman can relate to. we laughed cried got angry and held our breath while crossing our fingers

Please please bring back this show. I just caught wind of it. Watched the both seasons in 3 days! Loved every second!!
Please bring it back!!! 🙂

i agree!¡ bring lipstick jungle back. a group of my friends and i adore the story line. we would absolutely tune in to see more seasons. my personal highlights of another season: victory’s wedding. does wendy produce once again? more nico and kirby. ooh! what would victory’s wedding gown look like? what amazing shoes will these ladies wear? and more kirby!!!!

Please please please bring back this show. It is so much more realistic than S&C and much more watchable. I miss the show sooooo much… It was my only relaxation time and you ******** took it away!!!!!!!!