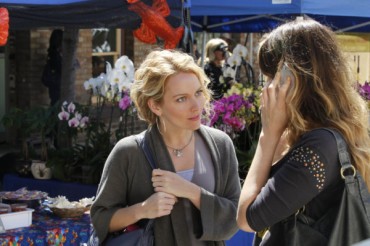 Since the network gave the show a greenlight early last year, Love Bites went through many changes — including Chupack reducing her own role to consultant because she had a baby on the way. NBC also went through some big regime changes and Love Bites sort of got lost in the shuffle.

Late least year, the network reduced the show’s episode order for 13 to nine episodes. It was then delayed until summer, a time when the networks often burn off projects that didn’t turn out as expected. The ratings for Love Bites have been very low so, to no surprise, NBC has cancelled the series.

The network has aired eight installments, leaving the pilot on the shelf. Produced before some of the backstage changes occurred, there are reportedly no plans to release that one.

Chupack is philosophical about the series. Now a writer on ABC’s Modern Family, she told EW, “My feeling was if only it could have been positioned as a summer treat mini-series instead of a show that was burned off and canceled… I feel like it was a successful little mini-series. It had amazing costars, and did something very different.”

She continued, “Considering everything that happened, including with me stepping down, it felt like it turned into such a delightful show… I hope it won’t be measured by when [it] finally aired, or by how many episodes aired or whether it was a success or failure. Rather, was it just fun to watch and was it good?”

What do you think? Was Love Bites good? What did you like or dislike about the TV series?

It’s not surprising that it is canceled. Every show that people actually like gets canceled! I am not sure who actually votes on the shows getting canceled, but I am guessing that they are not paying much attention to the 1000s watching the shows.A lot of times they then proceed to shove some stupid idiotic reality show down the viewer’s throats. Who actually watches the shows anyway? It is just as much of a reality show as “Professional Wrestling” is. If it were up to me I would boycott every single reality show and get some shows with substance, nice… Read more »

This show quickly became one of my new favorite shows. NBC has to bring it back, it was a smart, hilarious and incredible new tv show, something completley different to everything else on tv right now.

I thought it was a Great Show! So original and I couldn’t wait to see what would happen next! I am sorry it was cancelled…I didn’t know that 7/21 was last episode until now! And I so wanted Annie and Matt to finally get together! It should have been aired not in summer so more people would have known it was on.

It’s too bad that this show was cancelled. It was a great show with amazing writing. I either laughed till my stomach hurt or reflected on the truth being told by the different caracthers and/or storylines. Another show finished before it had it’s chance to prove itself.

Sick and tired of NBC cancelling shows -Outsourced and Love Bites are only two of many. Have decided to forget trying to watch anything on this channel since you can be sure that unless it is a reality show it won’t last more than one season. Why get invested in the first place!!!!

Mel
Reply to  I Hate NBC

I completely agree!!! They canceled two of my favorite shows!!! I’m so sad…

I was so disappointed when I found out that this show was cancelled. It was welcome change after constantly being bombarded with recycled cop dramas, and unrealistic reality tv shows. I was hooked after the first episode, and I was looking forward to seeing more. The good shows are always cancelled, while the sucky ones stay on forever.

I LOVE THIS SHOW!! It became my boyfriend and I’s favorite show after the very first episode, and we watched it every week! I went to turn it on this thursday and was very confused when Law and Order had taken it’s place. I’m EXTREMELY disappointed that it was cancelled! It was so fun and I loved how laid back it was.

I am really disappointed that this show has been cancelled. It was excellent in its writing, cast and plots that interconnected in subtle ways. It figures, most of America can’t recognize a good show when they see it, all they want is crappy reality TV.

I watch a lot of tv and this became one of my favorites this summer! So disappointed that once again a good show is canceled and will be replaced by something stupid or a rerun. It was quirky, fun, and interesting. I agree with others – it should just be a summer show and not get lost in the inundation of shows flooded out in the fall.

LOVED IT!
They should have put it on prime time. Nobody knew it was even on. Many people don’t watch TV in the summer because the networks usually air reruns and garbage. I just can’t take any more reality and contest shows!
I figured it would go away since my wife and I loved it.

I figured since it was airing during the summer that it was a throwaway show that hadn’t been/wouldn’t be renewed but I still hoped against hope.

Really good show (definitely picked up on the Love, Actually vibe) but you know when it comes to US television: if it doesn’t have a cop, lawyer or doctor in it it won’t get a fair chance.