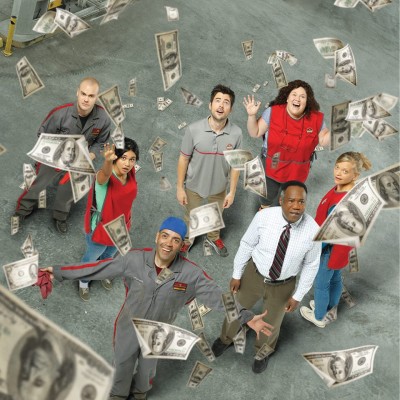 As expected, ABC has cancelled Lucky 7 after two low-rated episodes. The drama is the first of the 2013-14 season to fall.

The series debuted to a disappointing 1.3 rating in the 18-49 demographic with 4.43 million viewers. It was last in its timeslot. This week, the second episode plunged 46% to a 0.7 rating with 2.62 million. It quickly became the network’s lowest-rated show.

ABC has pulled the show from the schedule effective immediately and will replace it with reruns of Scandal, a drama whose season debut hit a new series high last night.

Production will shut down some time next week. It’s not known how many episodes have been produced or if the remaining installments will ever be made available.

I loved this show couldn’t wait till the next episode highly upset! !!

I was giving it a chance it wasn’t that bad. I was enjoying it and wish I could of at least got a whole season. But I am watching like five new shows right now so I guess losing one isn’t the end of the world.

Its so frustrating to get interested in a new show only to have it cancelled before it even gets a chance. Why should I commit my time to any more new series if they are just going to get cancelled as soon as they start.

I agree with Angie
I too was sucked in…I got hooked after the first episode. Then the second episode was even better. I couldn’t wait for the third…I was so disappointed. I don’t think they gave it a long enough chance….I too wish I knew what happened…

Attention all who liked ‘Lucky 7’: It’s just an American remake of a UK show on BBC One called ‘The Syndicate.’ (In the UK, a lottery pool is called a syndicate.) The storyline of ‘Lucky 7’ is pretty much exactly the same as that of the first season (2012) of ‘The Syndicate.’ The second season (2013) of the UK show follows a different group of winning characters, and when the third season airs (probably 2015), I guess it will follow a third group of winners. So, if you liked ‘Lucky 7,’ then check out ‘The Syndicate’ on Netflix, DVD, Hulu,… Read more »

I guess I didn’t miss much. Never watched and too many other great shows to watch. Can only record 2 shows at a time.

Not unexpected. An non-interesting premise and not well executed. Not so lucky for them

Didn’t this premise fail 6-7 years ago, with Luke Perry? Didn’t work then, why make the same show?

I try to give every new show a chance, but this show was too predictable and flat out stupid.

I can’t believe they would cancelled this show it is one of the few show my husband and I agree on. Why don’t abc cancel midlle that show sucks. Why can’t they give it till Jan. 2014 to see how it does?PLEASE CANCEL MIDDLE

Did you see the ratings for this show? A 0.7 demo rating for the second episode is the single worst rating for any drama episode in the ENTIRE HISTORY of ABC. The network would have lost millions of dollars if they kept in on the air until January.

I absolutely was sucked into this show! I could not be more disappointed to hear that it has been cancelled.

Dang it. I just got started watching this one after the second episode.
The first episode was VERY SLOW, probably why it didn’t do well. Plus the lead bad guy wasnt very believable. He can act fine, he just doesnt look the tough bad guy type.