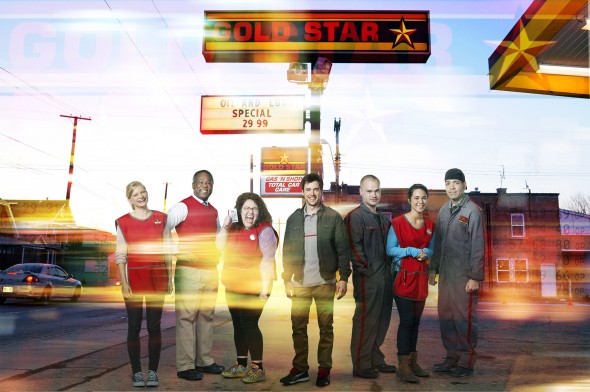 TV show description:
This dramatic series follows a group of seven close-knit employees of the Gold Star Gas N’ Shop in Queens, New York. They’ve been chipping into a lottery pool for years, never thinking they’d actually win — but then, they do. While the money may or may not solve all of their individual problems, it will certainly change their friendships forever.

Bob Harris (Isiah Whitlock, Jr.) is the manager, the service station’s unofficial patriarch for 25 years, and possibly the nicest man in the world. He wants to buy the Gold Star and turn it into the perfect workplace he’s always imagined.

Matt Korzak (Matt Long) is the station’s dependable and well-meaning assistant manager. He’s worked there since high school and carries the burdens of every working parent as he struggles to take care of his child and Mary Lavecchia (Christine Evangelista), his demanding and very pregnant longtime girlfriend. Feeling overwhelmed from financial strains, Matt takes desperate measures to give his family the life they deserve.

Nicky (Stephen Louis Grush) is Matt’s reckless yet slyly charming younger brother. He’s always been a bit of a screw-up and even spent some time in prison. He’s now out on parole and trying to better himself, employed as an assistant mechanic at Gold Star (thanks to Matt). Nicky is working to stick to the straight and narrow path and finds himself falling for a co-worker who’ll help him stay there, Samira. Unfortunately, not all of Nicky’s debts have been paid.

Samira Lashari (Summer Bishil) is a young store clerk who emigrated from Pakistan as a child with her family. She grew up American but has a foot firmly stuck in traditional values. Her parents have very strong ideas about the life she should be living — including the man she should marry — but Samira is intent on forging her own path, which means pursuing her dream of being a musician.

Denise Dibinksy (Lorraine Bruce) is the tender-hearted cashier who’s always optimistic and sometimes superstitious. She loves talking to customers and never hesitates to help others. Denise is struggling to lose weight in hopes of rebuilding her crumbling 20 year relationship with her husband.

Antonio Clemente (Luis Antonio Ramos) is the chief mechanic and is always cheerful. He’s happily married to Bianca (Alex Castillo) with three children. Though he works hard, he always comes up short each month.

Leanne Maxwell (Anastasia Phillips) is a young single mother who works the deli counter. She tends to keep to herself and is a bit of a mystery but still considers her co-workers her second family. She has a crush on Matt and also struggles to keep her past where it belongs.

Series Finale:
Episode #8 — Five More Minutes
Bob is rushed to the ER with Gloria and the Gold Star gang at his side.
First aired: September 25, 2014 (released online)

What do you think? Do you like the Lucky 7 TV series? Do you think it should have been cancelled?

So disappointed. I can honestly say that I have not watched one good show since Will & Grace. Now that I found something that is different and interesting it gets canceled….sad :-/

Wow! I don’t believe they cancelled the show it was really interesting, I was looking forward to seeing it each week.

Lucky 7 Cancelled!!!! What were you thinking … finally we get to watch a program that someone isn’t being killed every episode and you cancel it. I thought that it was a great show!! Please bring it back. We obviously need more programs like ‘Lucky 7’ and ‘Men In Trees’ to come back.

I LOVED THIS SHOW…REALLY UPSET BY THIS DECISION!!!

I really enjoyed the show and would think the network would at least show the episodes already produced.

abc you suck I loved the show

I WAS JUST LOOKING TO SEE IF LUCKY 7 WAS COMING ON TONIGHT AND OF COURSE, ABC CANCELLED THE SHOW. I WAS REALLY LOVING THE SHOW AND LOOKING FORWARD TO WATCHING ALL OF THE EPISODES, NOT 2!!! WHO MAKES SUCH WRONG DECISIONS?? PLEASE BRING THIS SHOW BACK, AT LEAST TO RUN ALL EPISODES FOR THIS SEASON AND THEN RE THINK THE NEXT STEP .THIS SHOW IS TOO GOOD TO CANCEL. HUMAN NATURE IS SO UNPREDICTABLE . NOT EVERYONE THAT WINS THE LOTTO LIVES HAPPILY EVER AFTER. THIS SHOW IS MORE TRUE TO LIFE THAN ONE WOULD THINK! PLEASE RECONSIDER.

I thought this was a good show , i guess if you have taste you can’t watch tv unless you like stupid shows like zoombies. Grow up ABC!

I really liked ‘Lucky 7’ and I can’t believe it was cancelled!! It was a great show, and with only 2 episodes, I was hooked and really looking forward to enjoying it weekly!! ABC made a mistake cancelling this show.

This is crazy! Two episodes did not even give it a chance. I watched both episodes and loved it. I even told my family and friends to tune in next week. The story line was great because I have often wondered how winning the lottery changed lives forever and I was getting a chance to see something I was interested in rather than comedies or cop shows. The actors and actresses on the show betrayed normal people like us that had a sudden streak of luck that would make their life easier! I wanted to get to know them better!

I liked this program a lo . It probably was cancelled because it had no toilet humor or stupid plot. To me it was like The Wire that keeps you waiting for the next episode. I think it was stupid to cancel this and I will not watch ABC again!

I really enjoyed this show. I don’t think it should be cancelled. It may be the time slot that is killing the ratings. It comes on at the same time as Sons of Anarchy. Which is one of TVs most watched shows. Maybe if they changed it to another day it would do better.

I liked “Lucky 7” but the lack of promotion and overly competitive time slot showed me that ABC lacked commitment to this show.

Cancelling after only 2 episodes doesn’t even make sense. All the new shows were starting at the same time and people didn’t have a chance to see which ones they really wanted to follow. There are so many shows that are really about the same thing, and Lucky 7 was different, it was kind of a nice change of pace and it was interesting. Even with only 2 episodes shown, it kept you wanting to see what would happen next.

2 episodes and cancelled…that sucks! I don’t watch television except for local news, but I happened to tune in early and watched the first episode. I decided to check out the second episode and now, the show’s cancelled. I hate television!

That’s typical, we live in a world of instant gratification. Two episodes is not even giving it a chance. These characters were like people we know or would like to know. Instead we keep reality shows about “real people” we’d never want to know nor hang out with. A sad state of affairs.