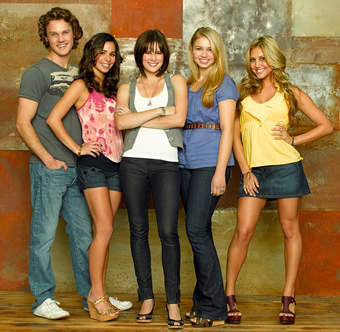 TV show description:
Set in Boulder, Colorado, this series focuses on a group of teenage gymnasts who are trying to make it to the Olympic Games. These athletes refer to their training gym, Rocky Mountain, as The Rock. While their skills make them contenders for the U.S. Nationals and possibly even the Olympics, conflict within their group becomes distracting.

Emily Kmetko (Chelsea Hobbs) is the newcomer at Rocky Mountain. She took third place at the Nationals, beating out top competitor Lauren Tanner. She works at The Pizza Shack with a guy she likes named Razor. Being a newbie, she’s somewhat of an outsider in the group and her family struggles financially.

Kaylie Cruz (Josie Loren) is a spoiled rich girl with her mom having once been a successful singer, and her dad a successful baseball player. She doesn’t agree with The Rock’s rules and breaks them, including the one that states that team members shouldn’t be romantically involved. She’s secretly dating Carter, another gymnast.

The top female gymnast at The Rock is Kaylie’s friend, Payson Keeler (Ayla Kell). She believes in training 24/7 in order to win Nationals and get to the Olympics. She’s been fighting a persistent back injury, but does her best to not let it get in the way.

Lauren Tanner (Cassie Scerbo) is known as the mean girl at the gym or the “bitch of the beam.” She left The Rock after Emily knocked her out of third place at the Nationals, but came back when a new head coach was hired. Only she and Kaylie’s brother, Leo, know that she’s had sex with her friend Kaylie’s boyfriend, Carter. Her biological mother, who wants nothing to do with her, is an addict who has been in and out of rehab several times.

Summer Van Horn (Candace Cameron Bure) is Lauren’s soon-to-be stepmom and her dad’s secretary. Though Lauren doesn’t approve of the impending marriage, Summer still goes out of her way to create a relationship with Lauren.

Carter Anderson (Zachary Burr Abel) is Kaylie’s boyfriend and another gymnast. He hasn’t been honest with Kaylie about Lauren, but gives her a necklace that belonged to his deceased mother. Carter gets suspended from The Rock once it’s revealed that he’s involved with another gymnast and refuses to reveal her name.

Damon Young (Johnny Pacar) is Razor’s friend, the songwriter in their band, and Emily’s closest confidante. He kisses Emily after finding out she’s never been kissed, and tells her he can’t be just friends. He has plans to move to L.A. because a band out there wants to record his songs. Razor (Nico Tortorella) is Emily’s coworker and likes her. He asks Damon to watch out for her while he’s on tour and tells him not to go out with her.

Sasha Belov (Neil Jackson) is the new head coach at The Rock. He is the only gymnast to have beaten the team’s previous coach, Marty. At one point he kicks Emily out of the gym and Nationals, but allows her back when he’s assured that she’ll listen to him. He cares for these kids a lot and wants them to do well.

Series Finale:
Episode 48 — United Stakes
Kaylie and Payson march into Coach McIntire’s office to inform him of the horrible news, that Coach Ray molested Jordan. When Coach asks Jordan to confirm this, a fearful Jordan denies the story. Meanwhile, Coach confronts Ray and he denies having participated in improper conduct with any of the girls. In an effort to help Jordan feel safe about reporting the truth, Kaylie and Payson send emails to other gymnasts through a social media site asking anyone to come forward if they were ever victimized by Ray. To their surprise, they receive multiple responses which they share with Jordan.

As the girls prepare for the big trials, Payson seeks inspiration for a new routine to perform and brings Rigo to a salsa dance club for support. After learning a few new moves, Sasha surprises Payson and encourages her to take a risk performing her new routine.

Thanks to Wendy’s devious plan, Kaylie is banned from trials after testing positive for pseudoephedrine, which can also serve as an appetite depressant. Kaylie denies having taken any cold medication or relapsing on her eating disorder. Alex demands that Marcus give Kaylie a blood test which will provide a more accurate result. When Marcus denies the additional test, Jordan, Payson, and Lauren boycott trials.

Thankfully, all the girls end up competing in the trials. Austin returns to give Kaylie some encouragement. Sasha is there to cheer Payson on. Lauren is nervous about making it through her entire routine without her irregular heartbeat causing her monitor device to spike too high. Later, Lauren exposes Wendy as being the person placing pseudoephedrine in Kaylie’s smoothies. After all of the routines are performed in competition, the winners are announced. Kaylie, Lauren, Jordan and Payson all make the team!
First aired: May 14, 2012.

Please don’t leave us hanging like that , this show has completely changed my life . You guys on ABC family need to her new people for this Job on ratings and stuff ur doing what u guys think Is best.. What about what we as the viewers want?… Seriously second show I actually liked on this channel that Is now being canceled ur about to lose me as a viewer even if it kills me !…

They will probably re air the series after the Olympics…. It makes sense.

http://www.youtube.com/watch?v=Kqj_mFUtjwI
any one know this soundtrack?

I love this show. It is one of my favorites and the only one my husband will willingly watch with me. ABC Family is making a huge mistake taking it off the air. The should come back to the 3 going to London and bring back Emily with Damon and their baby with her struggle to get back into gymnastics even though most women don’t after having a baby. Who every decides to take shows off the air needs to be fired. This was their best show by far. Listen to people, thousands all over the internet say they love… Read more »

I agree 100% with you about whoever cancelled this excellent and inspiring show should be FIRED for life. Obviously they person doesn’t care about their dreams or the dreams of others that was inspired by this show.

I am pretty upset that the show has ended. It was never really given a fair shot on ABC Family. Long hiatus between each season was also unhelpful to the “Make It” credibility (no one ever got to watch it!). On a channel that dubs itself a family network, but show cases more of the “down-side” of teenage life, this was at least one show that highlighted positive aspects of being well driven and happier teenager. So basically, the originally programming left on ABC Family, involves “Lying” in 2 of the titles and “Secret Life”, which basically alludes to the… Read more »

My husband and I love this show.. We both hate that they cancelled the show. I also agree with some of the people here. They need to do a better job of counting ratings and stop having such long breaks between season. I hate it when I get into a show and they only show 10 and then wait a whole year to show 10 more.. They need to start listening to the people who watch this. There would be bigger rating if the show has more than 10. I am thinking twice to keep watching ABCFamily. I also love… Read more »

This is my favorite show from any channel. I really think its a big mistake to cancel this show. I hope someone high up changes their mind!

[…] the end of the competition for Make It or Break It. ABC Family has cancelled the TV show after three seasons on the […]

[…] Family has revealed some additional details regarding the third season premiere of Make It or Break It. The show returns to the cable channel on Monday, March 26th — one year after the mid-season […]

this show is the best. i love it

i absoulutly love this show! cant wait for it to come back on!!!