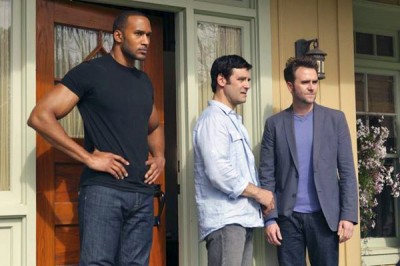 ABC has pulled their ratings-challenged sitcom, Man Up!, from the schedule. While their pulling the surely-cancelled series certainly isn’t much of a surprise, the timing is a bit odd.

Starring Christopher Moynihan, Dan Fogler, Mather Zickel, Henry Simmons, Teri Polo and Amanda Detmer, Man Up! debuted on October 18th and attracted an underwhelming 2.4 rating in the 18-49 demographic with 7.78 million total viewers. The second week saw the demo drop by 17%, followed by a 10% decline in week three, and another 6% after that in week four. This week’s installment, the show’s eighth, hit a series low with a 1.6 in the demo and 4.82 million.

Man Up! has averaged a 1.9 in the 18-49 demo and 6.44 million. It’s the network’s second-lowest rated show this season (just below Body of Proof and just above already-cancelled Charlie’s Angels). On our ABC ratings report card, it has a “D” and the way things were going it was due to drop even further.

Last month, ABC announced their mid-season schedule and Man Up! was scheduled to go off the air by January 3rd, replaced by a cross-dressing workplace comedy called Work It. At that point, only 11 of the 13 episodes of Man Up! had been scheduled to air. Now, ABC is leaving five installments on the shelf. Until Work It takes over, reruns of Last Man Standing will fill the 8:30pm timeslot.

Considering that we’re heading into the holiday season, when viewership is typically lower, it’s a little odd that the network would bother pulling Man Up! a few weeks early. Still, if ABC is considering airing the remaining episodes during the summer months (as they sometimes do with failed shows), it makes sense to have more episodes in the can than just two. Either way, this show is certainly cancelled and won’t be coming back for a second season.

What do you think? Will you miss the Man Up! sitcom? Why do you think it didn’t catch on? Should ABC run the extra episodes during the summer or just forget them?

Man up was awesome! Made me laugh and laugh! I’ve been watching it on Hulu plus and sad that it didn’t have another season! So bummed!

PS: Luckily I still have the four episodes on my Tivo. Clearly this show was never given a chance for people to find it. Maybe it just appeals to people like me who generally don’t watch ABC. Maybe NBC can pick it up since The Office is in its last season. It’s as good as The Office in my opinion. I will miss The Office, but at least it was given a good long 10 year or so run.

I loved this show! I didn’t find it until the last four shows and have been wondering why my tivo was not recording new shows this season. Just found out it’s canceled!!! I’m so disappointed. Literally, Man Up was the only show I watched on ABC besides Suburgatoy and I was so happy to find such a hilarious real show that had nothing to do with garbage reality tv and talent shows. I’m 41. At least Suburgatory came back this season, but I was really looking forward to Man Up. The shaggy little chubby guy was my favorite character.