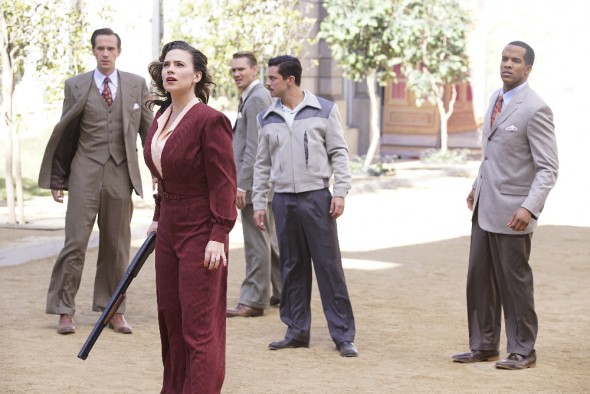 Why can’t season three be the final season?

This show is amazing! There aren’t much shows out there with such strong female leads portrayed in a male dominated workforce. I believe Peggy Carter is an awesome character and a true symbol for feminism. I am sure I’m not the only one who is interested in watching the rest of Agent Carter’s journey.

Please #RenewAgentCarter! It is a great show…great production from the hair, makeup, clothing of the period to the writing-such a great combination of science, humor, venacular of the time, the cast, the directing-love the foreshadowing and how the blocking speaks when the characters can’t (Chief Thompson: I don’t care who you get into bed with…Camera: Sousa and Carter in fra me together but still separate at this point), I could go on. FABULOUS!!!!!

No one is watching this show, they didn’t bring back Angie for season 2, a big loss for Agent Carter..

There you go ABC, messing up BIG TIME AGAIN! You have a gold mine in Agent Carter, & you’re tossing it away so casually, like, “oh well?” The writing, acting, directing, everything, is so superior to everything, including your over-devotion to your Thursday night line-up! Enough of has been “Grey’s” & keep the fresh-faced, & exciting Hayley Atwell & Agent Carter. You will be so sorry in the long run. You lost a large fanbase when you cancelled “Revolution,” “Resurrection,”, & so many more. You never seem to give the innovative shows a real shot. why? Why was Agent Carter… Read more »

Please continue on with Agent Carter! I love this show! It’s so different from anything else on. The cast has great chemistry with one another. Thank you for NOT disappointing. I can’t wait to see what happens next!

I love the show. This is the only Marvel TV series that I watch. Maybe because it’s for an older audience. I hope it is renewed.

Kassandra you are right, but they could do better. I love film noire. Pre-code is the best, with people like Barbara Stanwyck, but this series doesn’t have that magic. It often comes across corney or like a cliché. Again they could do better. Now I do think it still could see a season 3, because Marvel might be fine in loosing money for pride/ego. Marvel is making money hand over fist right now. Hayley Atwell is in another pilot thought, called Conviction.

Please, please, please don’t cancel this show. Love the characters and the various twists and turns in the plot lines!!

Love this show! Strong women in the 1940’s! I even put up a picture of my own mother (shot in the 1940’s) as a result of this show. Really hoping for Season 3. Have DVR’d all episodes.

I haven’t missed an episode since it started. I keep hoping it’s going to get good, but it hasn’t happened. I only watch it because it’s Marvel, and I’ve been a Marvel fan since 1976. All the characters besides Carter are boring and very unrealistic. So far, the best scene has been on a film set when they were filming Kid Colt and held up the comic.
R.I.P Agent Carter, you won’t be missed.

How is the Marvel Universe in anyway realistic? It is a fun show and fantasy like the rest of the Universe. Beside, Agent Carter ain’t a bad dame to gawk at…