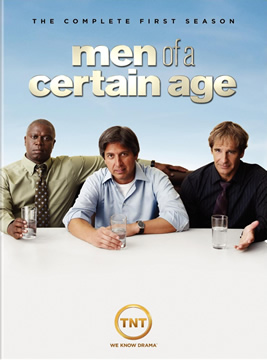 As you may already know, Men of a Certain Age has not been cancelled. TNT has decided to split the second season into two parts. The initial six episodes have already run and the second half dozen installments will air later this year, probably during the summer months. If you’re feeling a bit lost without the guys, here’s an opportunity for you relive their season one exploits.

Men of a Certain Age focuses on Joe Tranelli (Ray Romano), a friendly, 40-something, slightly neurotic, recently separated father of two who had dreams of being a professional golfer but instead owns and runs a party store. Joe hangs out with Owen and Terry, his two best friends. Owen Thoreau, Jr. (Andre Braugher) is an overstressed husband and father who is a car salesman at his dad’s dealership. Terry Elliot (Scott Bakula) is an offbeat, handsome, intelligent and still-struggling-to-make-it actor. The three men have been best friends since college but now, in their 40s, are navigating through the second act of their lives.

Season one has been released on DVD and the two disc set includes all 10 episodes as well as behind-the-scenes footage, deleted scenes, a gag reel, and commentary by Romano, Braugher, Bakula and series co-creator Mike Royce.

You can purchase Men of a Certain Age: The Complete First Season

for $29.99 or you can also try to win one of three copies here. To enter, you need to merely post a comment below.You can enter once per day.

Guidelines: This giveaway is open to participants with a United States mailing address only. (International readers can enter if they have a friend in the States who can accept their prizes by mail.) Many may enter but only three people will win. You must be 18 and older to enter and no purchase is necessary. Contest ends February 6, 2011.

UPDATE: Congratulations to RJ, Sarah, and Mel who won DVD sets in our contest. Thanks to everyone who played and we’ve got more contests coming!

This is the best show that has been on TNT in a long time… I SO WANT THIS!!!!!

These guys are great. Bring on more episodes!!!!

In men of a certain age, Ray Romano has proven himself to be a great dramatic actor, while still keeping some laughs in their. The Show has a brilliant cast with Scott Bacula and Andre Brauger in it, and i would love to win it.

And this is my entry for today.

Smartest SHOW ON TELEVISON!!!! it always leaves me wanting more.. would love to win this!!!

As I don’t get TNT, winning this set could be the only way I’d get to see the show (unless I went out and bought it or Netflixed it, but I’d rather win it).

Great show! Glad to hear it hasn’t been cancelled as I have been frantically looking for it since the last episode aired. Wonderful energy between the actors and good stories lines for them to follow. Can’t wait for it to come back on.

glad to hear it wasn’t canceled.

Excellent show… if you want to know what men think, watch this show ladies…

I just met Lisa Gay Hamilton and I peed.

Love Ray Romano and his shows. Everybody Loves Raymond was a hugh success and so will Men of a Certain Age!