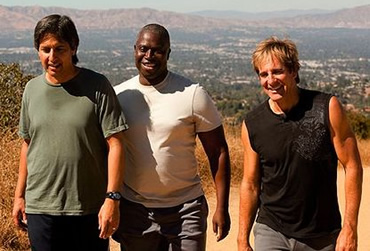 Well, there’s good news. Men of a Certain Age has not been cancelled. TNT decided to increase the episode order to 12 installments and has broken the season up into two parts. A start date for the next half dozen episodes hasn’t been set yet but they’ll probably be released in the summer.

Men of a Certain Age follows three male friends as they adjust to the realities of middle age. It stars Ray Romano, Scott Bakula, and Andre Braugher.

What do you think? Are you glad to hear the show will be back with more episodes? Do you think breaking up the season like this is good or bad for the ratings?

I love “Men of a Certain Age”-bring it back on. This show is missed!!

Finally a great show and network weenies don’t understand that by summer, former fans will be fans of something else. Sheeeesh.

Another great show bites the dust – but there is always room for another reality show!!! This show was great – one we looked forward to; Say it ain’t so…..

I love it. Very happy to hear that it will be back.

There are no words to describe the disappointment in learning that this show is cancelled. It is the most stimulating, creative, humorous, and heartfelt show I have seen in a long time. Is there a way we can get through to the network to bring it back?!

this is a great show,i hope it has 6 or 7 more seasons

Arghh! Just bring it back. It was intelligent AND entertaining. Can’t we have both once in a while? Please?

Pleeeeeeeeeeeease return this show to TV, it was so good and I just hope they bring is back

So glad it’s returning…Finally, a right decision by a network!

Barbara Button » Check the article date. It was cancelled a few months ago. Sorry!

I love the show and I’m glad its staying on. When I heard it was getting canceled I was so upset but now that it staying I can’t wait to see it. I like the two part deal it make it more exciting .

One of my all time favorites in the the last few years. I think guys of that age bracket and having done former shows, have an appreciation of good writing and what makes a good show. I was amazed when it I heard it was cancelled. I feel much better to heat that is not it. The show is barely hitting it’s stride, and shows like the “The Office, “Seinfeld” , “2 1/2 men” and “Everybody Loves Raymond” seems like they were on for years before anyone noticed them and made them cult classics.

I can’t believe they cancel great shows like this and instead air “reality” shows. I guess people watch those boring reality shows and like them. 🙁

Just want it back. Don’t care how.

This is the best show out there. Most stuff on TV is just crap!!!