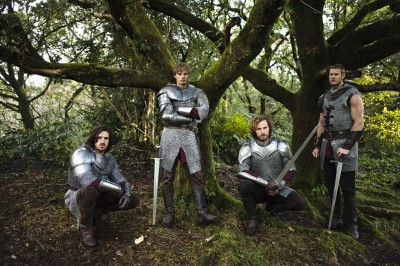 As we reported yesterday, Merlin is ending with season five. There’s some difference of opinion about whether the show was actually cancelled or whether it is coming to a natural close.

Merlin executive producers Johnny Capps and Julian Murphy have announced that they’re leaving Shine TV at the end of the year. When they leave, the company will cease to exist.

More importantly to fans, possible Merlin spin-offs are being explored by the Shine Group and Fremantle Media Enterprise (which holds the exclusive distribution rights to the Merlin series outside of the UK). New projects would take place in the Camelot timeframe but may or may not involve existing characters.

If there is a Merlin sequel project of some kind, Kudos Film and Television will produce it. Kudos is part of Shine Group.

Of their leaving, Capps and Murphy said: “It has been a wonderful five years with Merlin and ten overall with Shine, but we have always had the ambition to branch out ourselves at some point and now feels the time to take that leap. We do so with great memories, respect and best wishes for our Shine colleagues and in the knowledge that if there were to be any subsequent adventures, the world of Camelot is in safe hands.”

Shine Group chief executive, Alex Mahon said: “Merlin has been an amazing success domestically and internationally, it goes out with an epic finale worthy of this amazing series and we are excited about potential future stories that could be told about the Camelot universe. We are also understanding of Johnny and Julian wanting to try something of their own at this juncture, they do so with everybody at Shine’s best wishes after a decade of being great colleagues.”

What do you think? Woud you be interested in seeing new shows based in the Merlin universe? What should they be about?

There could be a modern day spin off with merlin. but the story ends the way it was supposed to. sadly. it was a good show at least they closed it good unlike Kyle XY. but as far as the “he will rise again when needed” thing, that’s part of the story of king arthur and camelot. doing some digging into it’s real history brings lot of closure. seems merlin series ended exactly at the right moment before our economic and world collapse. let’s see if the connection between the holy grail, joseph and merlin and king arthur will bring… Read more »

I hope very much that sometime Merlin will be continued!!! So I will wait for it…

I think they pretty much told us what the spinoff would be. The dragon said clearly that Arthur will return, and it showed Merlin in modern day. It HAS to be magic coming back in the present and the world erupting into chaos, and that will cause Arthur to rise again. That has to be it, unless why would they show Merlin in the present? It all adds up, and they definitely know that merlin and arthur are what make up the show merlin so we should expect them to come back.

I sure hope you are right!

There is no way a spin off could be the success Merlin was without Colin Morgan as Merlin. He made the show what is was,,, after all he IS Merlin.

After seeing the finale…. Could the dragons prophecy about Arthur’s return come to past? After seeing Merlin as an old Wizard walking around in present day England is he waiting for the return as well? How about it? Present day King Arthur & Merlin storyline. That storyline could be endless. We love the present cast so I say bring them all back! They all are great contributors to the shows success!
We can do Vampires, Werewolves and Witches we can do King Arthur in modern day.

I absolutely want a Merlin spinoff show ! The Original actors would be ideal and the very best choice, however i want the story line more than anything. Merlin and Arthur have been 2 of my favorite characters since childhood (i am 35) . “The show must go on!”

If the spin-off is half as fun as Merlin, than yes, it is a must have!
And it would be a delight to see the original cast return in some form.

It would only work if Colin Morgan was in the new series.

If there would be more Merlin, or Merlin spin offs. They would have to be with the original characters. Because it was mainly because of the amazing actors in Merlin, that this show has grown into such a huge succes. Without Bradley James, Colin Morgan, Angel Coulby, Katie McGrath, Anthony Head and Richard Wilson, Merlin would not have been so great.
Replacing them or making a similar series without them, just won’t work.

I live in the States, so I still have season 5 to look forward to, knowing it’s the end of a brilliant show that will be greatly missed! If they do any further projects in Camelot, they’ve got to have Colin Morgan as Merlin. He was my favorite actors on the show, and has talent beyond his years. This show has forever altered what I think if Merlin and Arthurian legend. I’ll never think of Merlin as just an old man again.

There is no difference of opinion. The correct definition of canceled is when a series and its show runners are not given ample time to give a series ending to their show. Because Merlin was always intended to end this season, the writing included a finale. They filmed it like the final season. BBC tried very hard to renew the contracts of the cast but they stuck to their guns and for that I am proud of them. So no it wasn’t canceled. It’s ending. There’s a difference. But not a “difference of opinion”.

If there is a Merlin sequel project of any kind I would be very interested but it needs to have Colin Morgan as Merlin. He was one of the best actors in this show. I believe that most fans would what more magic. The relationship between Colin Morgan and Bradley James as king Arthur and Merlin was wonderful. The comedy needs to be there as well. Arthur needs to accept Merlin as he truly is. It needs to be revealed. If they do movies and do not have some of the same people it would not be the same. It… Read more »

If they’re still planning to do those movies than I’m looking forward to those in any case. I kinda wanna see some GLIMPSE of that Albion place where magic could be free at some point as now it seems to me that the 5th season isn’t even gonna have a magic reveal… 🙁 I’m glad that Arthur is a good king but I don’t call 3 a 4 good years a golden ‘age’. In whatever spinnoff there could be, I wanna see a somewhat substancial Magic reveal between Colin Morgan and Bradley James more than anything else. If it’s supposed… Read more »

[…] UPDATE: There’s some indication that the show may actually have been cancelled as the producers had been negotiating the possibility of a sixth season and/or movies. Either way, season five will be the end for Merlin (as we know it anyway). […]