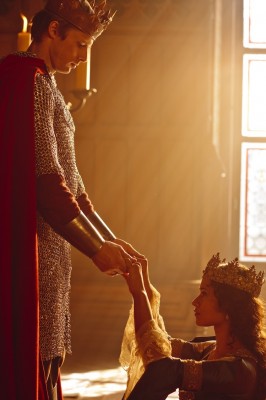 Tonight marks the season four finale of Merlin on Syfy. It’s been a whirlwind year for the young wizard (Colin Morgan) and Prince Arthur (Bradley James) so will there be a fifth season and more adventures?

Last July, at San Diego’s Comic-Con, FremantleMedia Enterprises announced that season five of Merlin had been commissioned by the BBC. The newest round of 13 episodes went into production this month. But, while UK viewers were guaranteed to see more Camelot adventures, it wasn’t clear that Syfy would be licensing the fifth season episodes as well.

Earlier this week, Syfy issued a press release that promoted tonight’s season finale — and teased season five. Syfy hadn’t specifically announced that they would be airing season five of Merlin but we’ve now confirmed it with a press representative. While there’s no word on when season five will air here in the States, seasons typically kick off in January.

Here’s the press release that teases the upcoming fifth season of Merlin:

As Fourth Season of MERLIN Comes to an End With Friday’s Season Finale on Syfy, Cast and Creator Offer a Look Back… and Forward

Thirteen episodes of sorcery and swordplay, dragons and demons, bewitchings and betrayals comes to a head this Friday when the fourth season of MERLIN culminates in an exhilarating season finale entitled “The Sword in the Stone, Part 2,” premiering March 30 at 10 p.m. ET/PT only on Syfy.

For cast members Colin Morgan (Merlin), Bradley James (Arthur) and Katie McGrath (Morgana), the fourth season has been filled with memorable moments for both the actors and viewers.

Morgan is particularly enthused about developments for the title character, who has gone from the King’s servant to his best friend and closest adviser. The fourth season presented some frustrating speed bumps in that relationship as Arthur’s traitorous uncle Agravaine wielded far more power and influence over the King than Merlin would have seen fit.

“After Uther died, there was an interesting transition within the characters as Arthur put family over friends,” Morgan recalls. “That was a difficult transition for Merlin to overcome. One of the key elements in the finale is Arthur seeing his uncle for who he is, and positively reflecting on Merlin’s valued friendship. Arthur always knew Merlin was a good friend and a trusted guy, but to realize he’s loyally been there the entire time is a big revelation for Arthur and certainly paves the way for where we’re going in Season Five.”

McGrath’s Morgana has experienced a true roller-coaster ride in Season Four, initiating one coup of Camelot after another before finally succeeding – if only for a few brief moments.

“I loved it when you see Morgana sitting on the throne after she has taken Camelot,” McGrath explains. “The difference in her body language and attitude and her presence is miles away from her coronation in Season Three, and even further away from what it had been in earlier years. I think it shows how far she has come and how much she has changed throughout the series.”

The entire series has changed, observes James – for the better, in his estimation. “We’ve gradually gotten closer to the legend, which requires us to get a little bit warped, because the legend is really quite dark. That shift has been fantastic. It’s what the show has needed, and what we have needed as actors because it has really kept our interest alive and provided us with a lot of new fun and challenges.”

Filming has begun on Season Five in Wales and France, and the cast is anxious to see what’s next for their characters and the series. But what do they hope is on the horizon?

“Merlin revealing his magic is definitely going to be the ultimate test for Arthur and Merlin, and I think it might be explored in the fifth season,” Morgan says. “The levels of trust between friends is one thing, but Arthur’s distrust of magic is something that runs longer than he and Merlin have been friends. It will take much more influence and much more work to break and to overcome. Certainly we’re entering into that territory, but it’s never going to be an easy task for Merlin. Still, it has to happen sooner or later.”

Underscoring just how strong all of its characters are, McGrath adds: “I’d like Camelot to realize that Morgana has a point. The persecution is unjust, and that magic has a place in the kingdom.”

MERLIN co-creator and executive producer Johnny Capps also offers a tantalizing possibility of things to come: “I think,” he says, “the return of Mordred would be very interesting.”

“The Sword in the Stone, Part 2,” an all-new episode of MERLIN, airs Friday, March 30 at 10 p.m. ET/PT only on Syfy. All three seasons of MERLIN are now available on DVD and on iTunes. Be sure to follow the latest news on MERLIN at the Official Merlin page on Facebook.

What do you think? Are you glad to hear that Merlin is returning? How long should the series continue? Should season five be the last season?

Please bring Merlin back. There is so much more that can be done! This was absolutely a great show. I am so sad that it has come to an end.

Please Please bring the show back. There so much more to Merlin and the dragon. I will watch every week. Thank you Akss

Merlin’s one of the most well written and choreographed shows I have ever seen. The actors and actresses are incredible. The costumes and scenes are incredible. I am mesmerized every time it comes on. If the show is over I am truly disappointed. The magic and chemistry between the actors and actresses was amazing. I am a single mom whose Friday nights were set for “Merlin”. I will miss the intrigue, the magic, the friendships, the honor. I love everyone involved this great and incredible show. There was not one character that I didn’t like. Five stars to all of… Read more »

PLEASE PLEASE continue the show!!! I Love this series!

I love the series. I think it’s one of the best on TV. Everyone I would tell about it didn’t even know it was on???!!! I agree with some of the others…it needs to be more available to viewers. Very very sorry to see this series go.

I love this series and would love to have it continue after season five. The stories are really good not to mention the great actors you have. Please keep your fans in mind –every time I mention it to friends, who have not seen it ,they check it out and love it!!!!

I love Merlin the stories are so great and its a show I can watch with my kids. I hope Merlin can continue because I will keep tuning in.

I love Merlin I can’t wait to see when Merlin gets older and actually see him in action. And Arthur excepts his powers. Keep on with Merlin because I will be waitning for 10 more seasons.

Merlin may have finished on Christmas Eve 2012 in the UK but we are campaigning to bring it back to our screens. Join us! Your voices need to be heard.

Love,love,love this action, mystery mayhem and magic!!!
Don’t stop what works. It’s actors , writers, set and costumes
Are great. My grand kids and I make it our movie nite.

Please keep Merlin going I look forward to the new season, when I heard this is the finale I said to myself there has to be others out there that enjoy this as much as I do, I can watch it over and over again!!! we the people that love this syfy flick have to save it. With that said I am petitioning that syfy PLEASE don’t let season five be the finale. Thanks a true fan of Syfy Merlin!!!!! And others on the syfy channel!!!

Please please keep this series alive. This one of our all time faves. It has fun, danger, romance, and mystery all rolled into one. I would love to see another 2-3 seasons of this series. In my mind it would not be the end of the world if John Hurt retires the dragon voice and they get someone who sounds similar. I will still watch faithfully.

did you really have to end the series like this. worst finale ever. u totally spoiled the whole series. please re-air or something this episode please

I hope they keep Merlin that’s my dads and mine favorite show to watch together! I’ve been looking every where since it went off to see if its coming back! PLEASE COME BACK TO US!!!