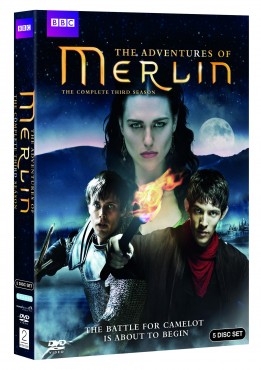 NBC cancelled the Merlin back in 2009 due to low ratings but the show’s been doing well for Syfy. Season four is currently running on the cable channel and Syfy has the option to pick up season five. If you’ve fallen a bit behind on your Merlin episodes, here’s a chance to catch up.

Season three of Merlin has been released on DVD and contains all 13 episodes on five discs, as well as audio commentary, a “making of” featurette, deleted scenes, outtakes, a photo gallery and more. You can purchase Merlin: The Complete Third Season

for $33.99 or, you can try to win a copy here. To enter, you need to merely post a comment below. You can enter once per day.

Guidelines: This giveaway is open to participants with a United States mailing address only. (International readers can enter if they have a friend in the States who can accept their prizes by mail.) Many may enter but one person will win. You must be 18 and older to enter and no purchase is necessary. Contest ends February 12, 2012.

UPDATE: Congratulations to Jason Brehmer who won this DVD set in our contest. Thanks to everyone who played and we’ve got more contests coming!

This is a wonderful giveaway. Thanks for having it! I hope I win. ^-^

I love merlin. I watch it every week.

OMG I love Merlin! I would love to win this. 😀

I have watched Merlin since the beginning when it was on NBC. It is funny. It is entertaining. And, most important, while watching it I can loose myself in a land far away…thansk to the cast and crew.

Put me down. I love magic!

Just started watching in season 3 and simply love it!!

I love Merlin! It keeps getting better and better

I love the whole concept of how they are all young;it works to well. LOVE THE SHOW!!!!!

I love Merlin so much, I have seen every episode of every season and it is just so amazing! I love Colin and Bradley and everything about them and the show. Please pick me as your winner!!!! And thank you for this opportunity!