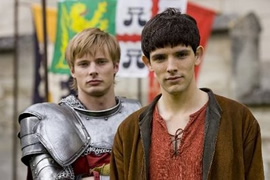 Though the show attracted a devoted audience on NBC, it looks highly unlikely that NBC will be bringing Merlin back for a second season. Its ratings were anything but magical for the peacock network.

Fortunately for UK viewers, the show has been a success for the BBC. The first season of Merlin began airing in September of 2008 over there and ran through December. Soonafter, the network announced that a second season had been ordered.

The second season of Merlin is set to debut on Saturday, September 19th. In the premiere episode, an ancient and supposedly cursed tomb is discovered that’s filled with treasure. Meanwhile, a new servant named Cedric (Mackenzie Crook) is doing his best to supplant Merlin’s position as Arthur’s right-hand man and friend.

We may not get to see the episodes for quite awhile here in the US (perhaps on BBC America?) so here’s a little taste of what season two holds for the young magician.

What do you think? Look enticing or not up to snuff?

As a 19 year old, I was really enjoying watching Merlin on sunday nights with my mother, to fill that awful television-Sunday-void. All of a sudden, once football season started, Merlin was just gone one Sunday without any notice of why/when/if it was coming back. Merlin was the only good original drama left, and now all we have is tired reality shows, police/law shows, and nurse/doctor “dramas.” Ya know, not everyone likes these things.

OH come on! who the heck decides which shows are better than others cause clearly they have no clue what people want to see! Merlin is an awsome show, unfortunatly now the bbc is making youtube take all the episodes down, not fair. It’s like reunion all over again! You get sucked in my a show then WHAM! it’s cancelled, come on NBC put some good shows back on, and cancel some of the crap you think are great.

*Thanks for reading my tirade, just need to vent some steam ;)*

I haven’t seen anymore Merlin shows on NBC since August 2009. Are they going to continue to show it or what? I loved the show. I am a sci fi/fantasy movie watching person. Can you give me an update on what channel to watch to continue seeing Merlin please.

WHY WHY WHYYYY?!!? Why do these networks reel us in just to leave us dangling? I’m really N2 MERLIN and I’m eagerly anticipating Season 2. I don’t appreciate being toyed with like this because the Season 1 definitely ended with an open story line. PLEASE NBC DON’T LEAVE MERLIN FANS HANGING.

I don’t believe this! I demand NBC to air Merlin season 2! I just happen to come across it, so I watched it. Then, here I am(a total fangirl) typing a request for something I truly want to watch. Merlin even reached (me) a young audience. I mean REALLY, who would want to watch football instead of Merlin?!

I always enjoyed the show but wondered why they would put it up against Sunday night lineup of 60 Minutes and than I realized it was just a summer stand in for NBC Sunday Night Football. Network executives have long shown an odd sense of values when it comes to placing a show. Right now NBC has five prime time slots a week for Jay Leno. When it comes to quality TV “Merlin” has quite an edge over most NBC faire. They should find a spot for the show on NBC period.

Surprised the ratings were low in America. Would suggest checking with Canada. Sad, as Merlin on Sunday evenings brought back memories of my youth watching Bonanza on the same evening. Great anticipation.

I just watched the season 2 first episode. The very best of all of them. very good story, and great acting.

More Merlin NOW! A creative show that actually involves some imagination! I am so tired of reality shows. NBC needs to bring it back! SYFY would be a fine fit if not NBC directly, but some US station. We pay enough for programming, time for something other than bug eating and re-hashed japanese game shows!

I can’t believe this. I loved Merlin and was waiting for it to start again. We saw it on Sunday evenings, and of course football has to take precedence. We are not all sports fans. NBC, please put Merlin back on the air for us.