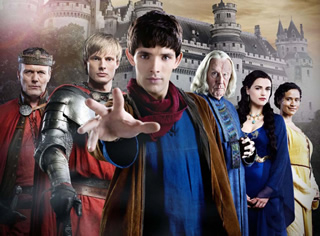 TV show description:
A drama series that brings a new take to the story of Merlin (Colin Morgan), the sorcerer of Arthurian legend.

In this version, the mythical kingdom of Camelot is a fantastical realm of legendary beasts and mysterious people, a dangerous world where magic has been banned by the stern and protective king, Uther Pendragon (Anthony Stewart Head).

When Merlin, a young man gifted with extraordinary magical powers, arrives in the kingdom, he quickly makes enemies — including the heir to Uther’s crown, headstrong Prince Arthur (Bradley James). Guided by Uther’s wise physician Gaius (Richard Wilson) and The Great Dragon (voiced by John Hurt), Merlin begins use his talents to unlock Camelot’s numerous mystical secrets. As he does so, he discovers that his destiny and that of Arthur, the kingdom’s young leader in waiting, are inextricably linked. Merlin becomes Arthur’s servant and begins to bond with the Prince

Morgana (Katie McGrath) is the daughter of Uther’s deceased best friend, and now the King’s ward. Despite their class differences, she is best friends with her servant girl, Gwen (Angel Coulby). Though Gwen generally has an open and friendly personality, she occasionally butts heads with Arthur.

Meanwhile, Nimueh (Michelle Ryan), a beautiful and powerful sorceress, is bent on destroying Uther, Arthur, and restoring magic to Camelot.

Series Finale:
Episode #65 – The Diamond of the Day (part 2)
Merlin escapes the Crystal Cave after regaining his magic. He travels to Camlann and uses his powers to help defeat Morgana’s troops. During the battle, Mordred gives Arthur a fatal wound but Arthur gives him one of his own. As Arthur lays dying, Merlin confesses to his friend that he is a sorcerer and to save him, they must travel to Avalon.

In Camelot, Morgana’s spy is discovered and hanged. Sirs Gwaine and Percival hunt down Morgana. She overpowers them and tortures Gwaine to death, but not before she extracts Arthur’s location from him.

Morgana reaches Merlin and Arthur and attacks them. Wielding Excalibur (which was forged in Dragon’s breath), Merlin kills her but, even with the help of The Great Dragon, does not get Arthur to the island in time. Arthur thanks Merlin for his friendship and loyalty — and then dies in his arms.

The Great Dragon confirms that Arthur is dead. Merlin realizes his destiny is to protect the King’s resting place. He throws Excalibur into the waters of Avalon and then sends Arthur’s body after it.

Guinevere ascends the throne of Camelot and Gaius becomes her mentor. Merlin waits by Avalon for the rise of Arthur. In the present day, we see that an immortal Merlin is still waiting for his friend Arthur to rise again — as the “Once and Future King” is destined to do when Albion’s need is greatest.
First aired: May 31, 2013

What do you think? Do you like the Merlin TV series? Do you think it should have ended or continued for a sixth season?

In a world filled with heartache, debt, and dissapointment, it’s a nice change to escape to a fantastical world that deals with much of the same but in a very dynamic and exciting way. The stories are of serious matters with strong, raw emotion but adding a twist of whimsical humor. I just love Merlin’s character. He reminds me of me. Always trying to see the good in people but not afraid to defend the people he’s loyal to all costs. I will certainly miss it.

Best show on BBC, used to look forward to Saturday evenings. Sorry to see it go.

Don’t cancel this show. It’s one of the few decent shows on tv. Bring my family show back!

You got to be KIDDING another good TV show taken off. What up with the TV producer ? No doubt replace it with a brainless so called reality show ( that not really reality) that take little thinking to produce and boring to even watch . The TV is flooded with these so called reality show . Its ni.ce to be able to watch a show that doesn’t look like a day time soap. Please rethink about taking Merlin off . It is entertaining

Where is Merlin? It hasn’t been on for a few weeks. And I agree, this is a great show why is it being cancelled? I don’t watch reality TV and taking away quality will not make people who don’t like reality TV watch it. We’ll just read more.

Love this show. Please don’t end/cancel. I just found it on netflicks yesterday and am already half way thru S. 1. Advertise more on tv or something.

Love this show, I want it to keep on with the stories !!!

I do not want this series to end.I look forward to watching it weekly, and look forward to it’s return when it goes off for the season. my daughter will be sending the same message shortly. It’s a great wholesome family series,and there are too few of .this kind of programs on cable. whatever you replace Merlin with, I for one will not watch. please do not take Merlin off the air, or if you do will it be shown on another station.

it is sad that the series is ending. i shall miss the gallantry of the days of old. we need such men today.

I liked the Merlin series and I can not believe it was cancelled. I liked the BBC Robinhood series and it was also ended too soon. I wish they would bring it back Merlin. It seems reality shows keep being replacing good shows. I do not know who is watching the reality shows as all my friends do not watch them. I do not think the networks really understand how many people are really watching these good shows. I know some people do not have cable and they watch the shows playing on tv. Just looking at the cable tv… Read more »

I love this show and it blanks me off that another show like this one is canceled. I have been waiting for the new season and now that it is here.. they stick it to you.. I wish I had a vote some where to tell the higher ups to leave some showes alone.. Being Human will be next you watch.. WB got rid of secret circle I liked it too.
DISAPPOINTED

hate to see itend will miss the show

I really love this show.I hate to see it end.

I enjoy Merlin and am happy to see trailers indicating that it is returning!