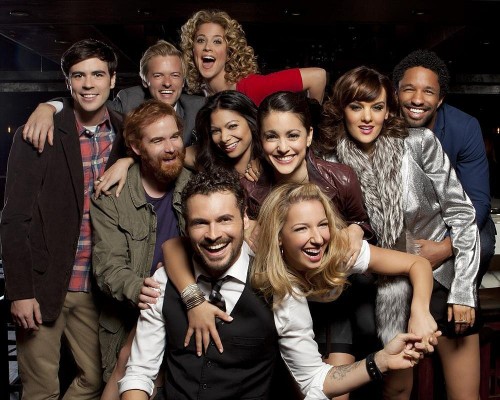 TV show description:
This comedy series takes place on one night in the Mix (a high-end bar in Manhattan’s trendy meat-packing district) and revolves around 10 single people.

Tom (Blake Lee) was recently dumped by his fiancee and hasn’t been out on the town in 10 years. His best friends — handsome and confident Cal (Craig Frank) and fast-talking Bruce (Andrew Santino) — are throwing Tom back into the dating pool whether he likes it or not.

Tom’s first encounter with the opposite sex is with Maya (Ginger Gonzaga), an attorney who’s as beautiful as she is brutal. Before long, Tom is in tears and then, things get worse.

Series Finale:
Episode #13 — Closing Time
The night is coming to an end and it’s Tom’s last chance to ask Maya to go home with him, but Bruce and Cal explain the various obstacles that lie ahead that could prove costly on his quest to find love. Meanwhile, Bruce has to decide whether or not to make a final play for Jessica or go home with a girl who is infatuated with his red-headed attributes. Across town, Liv finds herself in a situation with Ron that comes down to a last minute decision that will ultimately affect her happiness. And Kacey will need to overlook some information she learns about Cal and decide if she still wants to keep her date with him.
First aired: May 21, 2014.

What do you think? Do you like the Mixology TV series? Do you think it should be cancelled or renewed for another season?

Seem to be experimenting with some technical differences.”Ow! My Balls! Oh! NO! Oh!No Oh! No !” They’ve cancel everything but the Reality show, so I colored my hair this morning, and tonight all i got is my highlights 2 watch. Beavis and Butt-Head Idea,“Reality”shows is combining “Jack Ass and Wrestling” in a blender, and leave the top off. Reality bacteria – they’re the only culture some people have. I cannot sing, dance or act; what else would I be, uh! duh! Reality star!!!!. Interrupt this program for late breaking news!!! Beavis and Butt-Head has hijack the Networks!!! (hehehehe) They had… Read more »

I absolutely loved this show! I was such a pleasant change from all of the reality or vampire shows sprinkled throughout tvland. Please, please reconsider!

ABC definitely doesn’t want me watching their network! How can they cancel this show?

cancel?? brilliant in all forms This show is hilarious!!!! Can’t believe it’s cancelled!!! Bring it back!!.

I loved this show they shouldn’t cancelled it. It was funny and I enjoy watching it . I want to know what happens to everyone. Please renew ):

ABC must be really blind to cancel this show!

Ive been telling my 20-30+ year old friends about this show. The humor and storylines are dead on! City singles life! just because people don’t have time to watch it during the airtime doesnt mean they’re not watching it online!!! Get with it abc!

awsome show, lok foward to it every week one of the only shows i watch live

So pissed! They can’t cancel this show. It’s the best show on right now! ABC is so wrong!

What a great show. Watched it every week. The character development was really interesting. Such a funny show. What ashamed. Looked forward to see what the outcome was.

This show is by far the best new show on TV. Just watched the finale and my boyfriend and I are mourning the fact that it’s the series finale. We want to see what happens next!!! They always cancel the good ones. 🙁

Plus I really want to see how things go for Tom and Maya. I know the premise of the show was to hook up for the night but actually it was a lot more than that. These characters were developed and it was pure genius how the back story of each one was presented. This was my favorite show. It was hilarious and touching and fresh.

Abc needs to look at this show again.

I love this show. I can’t believe it was cancelled. I liked all the characters and it was the funniest show on.

This show is hilarious!!!! Can’t believe it’s cancelled!!! Bring it back!!

Love this show!! Not sure where they can go for season two but look forward to it every week! Great cast of characters!

This show rocks! Unbelievable if they don’t bring it back. He’ll of a lot better than the crappy reality shows…