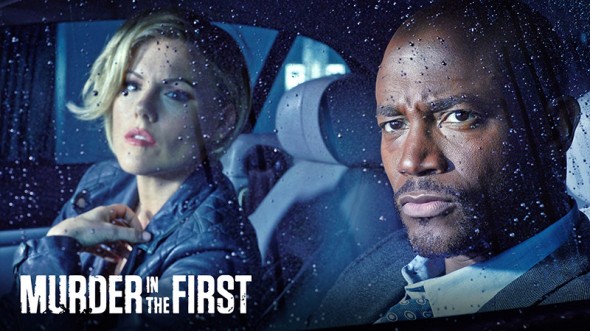 TNT has renewed their Murder in the First TV show for a second season of 10 episodes. The first season averaged 2.84 million viewers with a 0.5 rating in the 18-49 demographic.

TNT Books Second Season of “Murder in the First”

TNT has ordered a second season of its powerful crime drama Murder in the First, starring Taye Diggs (Private Practice) and Kathleen Robertson (Boss). The series, which is executive produced by Emmy(R) winner Steven Bochco (NYPD Blue) and Eric Lodal, ranked as one of basic cable’s Top 10 series of the summer. TNT has ordered 10 episodes for the second season.

Over the summer, Murder in the First took viewers deep inside a complex homicide investigation that spanned the entire season. The series followed San Francisco homicide detectives Terry English (Diggs) and Hildy Mulligan (Robertson) as they investigated two seemingly unrelated murders. The mystery deepened, however, when they found that both murders had a common denominator in a Silicon Valley wunderkind.

In its first season, Murder in the First averaged more than 4.7 million viewers in Live + 7 delivery, including 1.3 million adults 25-54. The drama drew a sizeable audience through TNT’s various platforms, reaching an average of 9.2 million viewers through live television viewing, DVR playback, set-top VOD and digital on-demand.

Murder in the First is produced by TNT Originals. TBS International is handling distribution to regions outside the United States and Canada.

TNT is television’s destination for drama. Seen in 101 million households and ranking among cable’s top networks, TNT is home to such original drama series as Rizzoli & Isles, Major Crimes, Falling Skies, The Last Ship, Legends, Murder in the First, Perception, Dallas and Franklin & Bash. TNT’s upcoming slate of original scripted dramas includes The Librarians, Public Morals, Proof and Transporter The Series, which will make its U.S. television debut on the network this fall. TNT also features such dramatic unscripted series as Cold Justice and the upcoming On the Menu and Wake Up Call. In addition, TNT is the cable home to popular dramas like Hawaii Five-0, Castle, The Mentalist, Bones and Supernatural; primetime specials, such as the Screen Actors Guild Awards(R); blockbuster movies; and championship sports coverage, including NASCAR, the NBA and the NCAA Division I Men’s Basketball Championship.

What do you think? Did you watch the first season? Are you glad that Murder in the First has been renewed for a second season — or do you think it should have been cancelled?

Great show!! Finally a cop show not set in LA or New York. Should have kept south land too.

BRING IT! We were hoping there was going to be another season. Yeaaaaaa!
Thank you TNT

Luv this show. Steven Bochco is awesome. Watched several of his cop shows from years ago. Keep Murder In The 1st on air…..I like the format of an ongoing plot. Ecxellent police crime show, drama at it’s best.

Luv this show. Steven Bochco is awesome. Watched several of his cop shows from years ago. Keep Murder In The 1st on air…..I like the format of an ongoing plot.

I love the show , I am so glad its renewed for another season

This is a really good, keep you watching more, kind of a show. Please don’t cancel, thanks

Absolute love this series. One of the best on TV. Please continue it and others like it.
Thanks

Please bring on a 2nd season. I watched #1 season & really enjoyed it!!

Yes I am glad the “Murder In The First” series has been renewed. My husband and I watched it faithfully, right after Mary in Major Crimes. We enjoyed it. Love the characters and the bizarre plot lines. Can’t wait!
Thanks for the entertainment.
Sheila

I loved the show and the chemistry of the lead actors made it all the more enjoyable. I have been trying to find out if it will return and I am so happy to hear the good news that it will, now I need to know when. There are only a few shows that I care to watch, and this is one I don’t want to miss. Sign it up for a lifetime! The scene in the night club when Terry sings ” AT LAST” and Hildy’s reaction. was one scene I will not erase from my recording. I am… Read more »

Joan, I totally agree with your comments IN FULL…so few good shows on and should be signed up for a lifetime! Also when Terry sang “AT LAST” it blew my mind! LOVE THIS SHOW!!!!