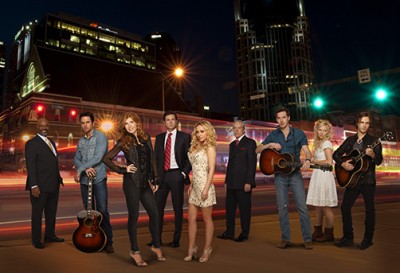 TV show description:
Music legend Rayna Jaymes (Connie Britton) reigned as the Queen of Country for two decades and topped the charts. Now, her grip on the throne is slipping. Her last album tanked and ticket sales are soft. Rayna refuses to be steamrolled by her record label as they present a new arrangement. In the face of an evolving industry, Rayna is struggling to adapt, reinvent herself, and try to stay relevant.

Juliette Barnes (Hayden Panettiere) is sexy, sassy, and there’s trouble in her wake. She’s also the country’s #1 crossover artist. In her climb to the top, Juliette’s public image is threatened by circumstances she struggles to control. And while she is determined to sit on Rayna’s throne, Juliette refuses to deal with her difficult past.

Offstage, things aren’t much smoother for Rayna. Her father is Lamar Wyatt (Powers Boothe), Nashville’s most influential businessman who continues to complicate her life. Their strained relationship is defined by years of resentment and secrets that come to a head when Lamar and Rayna’s sister, Tandy (Judith Hoag), push Rayna’s husband Teddy Conrad (Eric Close) to run for mayor. For Teddy, this marks an opportunity to share the spotlight with his wife instead of continuing to stand in her shadow.

Coleman Carlisle (Robert Wisdom) has served on Nashville’s Metro Council for 11 years. He’s always been backed by Lamar until a disagreement causes a big rift between the two.

The city of Nashville is the stage for many hopefuls. Deacon Claybourne (Charles Esten) is Rayna’s longtime bandleader whose unrequited love for her prevents him from claiming success if he went on his own.

Scarlett O’Connor (Clare Bowen) is a beautiful and gifted songwriter who supports her boyfriend Avery’s talent while still being unsure of her own gifts. Avery Barkley (Jonathan Jackson) is a struggling alt-country musician who can’t help but feel left behind when his girlfriend Scarlett’s songs have a chance to find an audience before his own.

Gunnar Scott (Sam Palladio) is a wholesome up-and-coming crooner who finds a musical soulmate in Scarlett and comes between her relationship with Avery.

Series Finale:
Episode #TBD
This episode has not been released yet.
First aired: TBD.

What do you think? Do you like the Nashville TV series on ABC? Do you think it should be cancelled or renewed for another season?

What happened to Hallie????

Thought I’d have to stop watching after Rayna was killed but I’m actually still enjoying every minute. Great writing and such a talented cast! My absolute favorite show!

I love the show… please keep it on… 🙂

Keep this show running strong! LOVE it! Sad to see Rayna character killed off, think she made the show, but I can’t live without this series, it must continue!

Love the country music and there performing and drama

Love it! Best written and performed country music. Characters are believable and earthy and so musically talented. Performers better than o the CMA Award shows.

Nashville was my fav program and I’d love to see it back on the air.I waited every week and and even saved them on my DVR. Really miss this show and need to know the ending of the last show!

I hope what I am seeing is TRUE another network picked up Nashville I have my fingers crossed I love this show. Can’t wait for the show to start again!

If anyone hasn’t heard yet, it has been picked up by CMT for a fifth season of 22 episodes!!

I think they are making a huge mistake for cancelling this show! Especially for country music fans! The story line was exceptional, the singing was awesome and each show left you sitting on the edge of your seat – waiting for next week to swing around! I can only pray that another station will pick up this great show!

This is my favorite show on TV….I adore the cast and the music. I hope it returns…………

Such a great show!! All the storylines are great and the musicians and singers make the show. I am very sad to see that this is canceled!! This is my favorite show on TV.