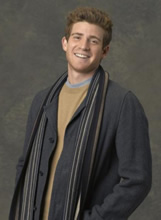 As previously reported, ABC had planned on running just four of its six episodes of October Road. Though the series shows evidence of losing steam, ABC has changed their plans.

October Road debuted on March 15th to 13.93 million viewers. The second episode dropped 16% and the third dropped to less than 8.3 million. Despite this decline, the series has been attracting a healthy percentage of the desirable 18-49 demographic.

October Road will take a one week break while a double dose of sitcom Notes from the Underbelly debuts on April 12th. Underbelly will then move to Wednesday nights beginning April 18th. The two episodes of October Road will air on April 19th and 26th. No word on what will occupy the timeslot after that.

A final decision on an October Road second season will likely be announced in mid-May at the network upfronts. Stay tuned!

make a second season. this show is great

I love this show…please tell your friends to watch…maybe there will be a season 2!

I think October Road is one of the best shows on right know.Please keep the show on for a second season and then some.

My wife and really enjoy this show. Having grown up and gone to school in New England, I appreciate the setting and characters. I hope that stays on the air. The music is terrific!

Most tv does not live up to the hype in this viewers expectation, but to cancel this show would be a huge mistake. Im 30 and its the only show I can truely relate to. I believe if you give it some time with a little creativity you’ll get a solid audience. Thankyou for attempting to preserve this great show!

This show is the Bomb. I love it so much. It’s like a step back in time. Don’t take out the bad stuff on Sam though. Let one of the others suffer, but not him……

This is one of the best shows offered now in the time slot that they have (ABC) keeps messing with – Six Degrees and Men in Trees being in it before and both also quite great shows. Now I read that this may or may not be on? Please ABC STOP messing with the viewers who love these shows and let us have more instead of less!!

do not cancel this show! it should always be on after grey’s!!!

I love this show. Please keep it on I am dying to find out what happpens!!!!

I came in late- the third episode, but I fell in love in only one episode. Thats NEVER happened, so after downloading and watching them all -im attatched! I would be VERY upset if this show wasnt picked up!

October Road is SUCH a great show!!! So many people will be overwhelmingly disappointed if this show does not return. The cast is great and it has a truly captivating storyline… plus the setting is New England!!!

i love this show!! I can’t wait till thursday comes just so i can see the ultra sexy Geoff Stults. I hope they have a second season!!!

Me and my girlfriends just love the show! All the women in my neighborhood watch it and talk about it constantly. I really hope this shows stays on, you have many loyal viewers.
Thank you
Jen

How can the networks hope to build viewer loyalty when they constantly move show air times and days around, mixed in with starting and stopping the episodes? Don’t they realize (or care) how frustrating that is to viewers?